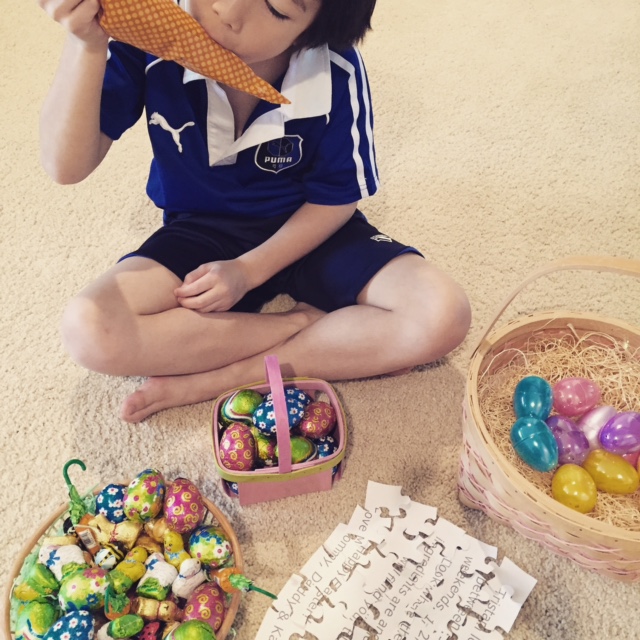 This past Easter, I found myself in unfamiliar territory. I typically am well organized and plan things weeks, even months ahead. I was behind in doing our taxes by at least one month. Then Easter crept up on me. Isn't it usually in April?! I really had to cram for this one.

Weeks ago, my 7 year old started talking about this year's Easter hunt. He gave me suggestion after suggestion. It was like he was planning his own egg hunt! Year after year I would use these plastic eggs, hide each of them with clues inside to find the next egg until the very end when the Easter basket was revealed. As he got older, I made them harder. It was quite a bit of work to come up with good questions and to hide them in new places around the house every year. We did move houses a couple of years ago so that made it a bit new. My husband thinks my son is too old for Easter hunts but I told my husband that he won't stop talking about the Easter hunt so obviously it means a lot to him! He gets super excited every year. But then I did raise the bar a bit by planning these cool Easter hunts and cooking us a feast every year. Ha! Kind of like his epic birthday parties. Ahem.

This year, I just had no time. I mean I thought I still had time but Easter came early this year! I've been busy. I have a 6 month old to take care of now. So I sort of have an excuse. Right? I literally had 24 hours to plan another awesome Easter hunt. Done. At the end, my 7 year old said he really enjoyed it. Yes! :) I survived another Easter and I did not disappoint! Phew.


This year's Easter hunt had three parts to it. Part one involved finding all the plastic eggs around the house. Part two involved opening all the plastic eggs and assembling the puzzle pieces found inside. Part three was to solve the riddle written on the finished puzzle that revealed where the Easter basket was. That's right! We like to make our boy work hard for his chocolate eggs! Muahahaha.

As I was breastfeeding and looking at photos of my daughter on my phone, it dawned on me that I could just take pictures of where all the eggs were hidden. That would be SO much faster than brainstorming new and interesting questions. Then I could just show him a picture where the eggs were one by one in no particular order. Of course I would have to order them so that he would have to run up and down the stairs for each egg. And of course, I would have to make the pictures hard to identify by just taking the edge of an object and zooming in a lot in certain areas. This would basically be a test of how well he knew our house. How well could he find things that he hadn't seen for awhile? All the clues would be in the surrounding picture so he would just have to look carefully and think a bit. Aha! This picture clue scavenger hunt wasn't as easy as it sounded. But he did super well. He was only stuck on one or two of the images and we helped him along a bit. In some of the spots, we inserted a chocolate egg nearby too. Whatever he found, he would put in his basket. He missed one chocolate egg but got everything else! It was actually a lot of fun. I tested out the photos on my husband beforehand and he was even stuck on some. I got him to narrow the pictures down to the ten best ones. The following photos are a few examples of what we used. 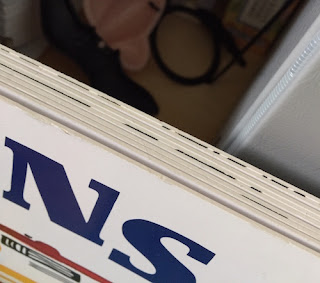 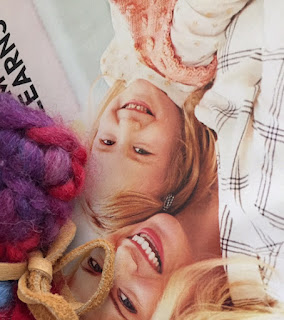 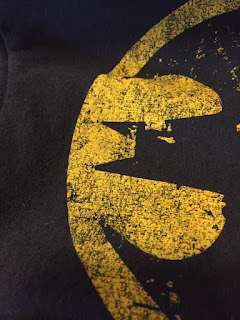 I actually really love the idea of a picture clue scavenger hunt. Some of the pictures really involve problem solving too. For instance, the batman shirt is my husband's tshirt. Yes, it was in our walk in closet but where? My son had to figure out which part of the closet had my husband's clothes, then he had to figure where rather than making a mess of everything searching for it. I am organized and since my husband has a gazillion tshirts, bins were set up for him with various themes. And I used labels! So my 7 year old had to identify that Batman is a Superhero and the bin labeled Superhero/Space would be the place he should look for the tshirt. I'm proud that I came up with the picture clue scavenger hunt all on my own too. Lol. The puzzle idea I had already read about. I'm sure others have done the picture thing before but I didn't know about it. It was my lazy way of coming up with something fast, different, and fun. It's getting harder and harder every year to surprise my little man! 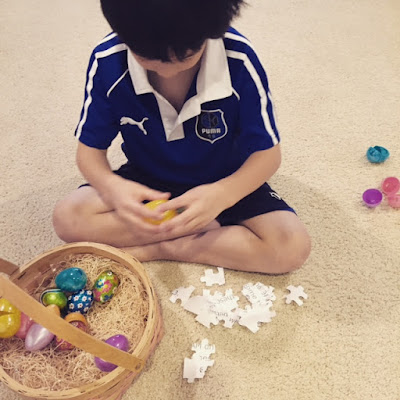 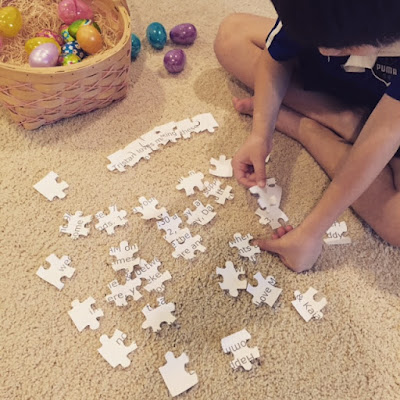 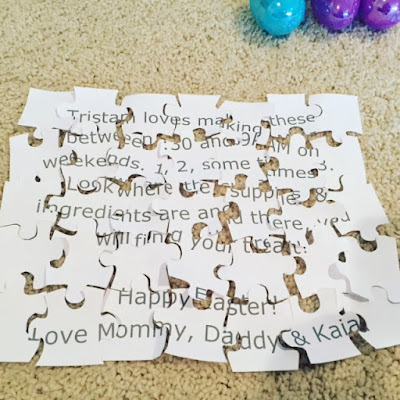 For the puzzle, I was going to use single puzzle pieces for each egg, so 9-12 total pieces. However, my husband thought that was too easy so he picked a puzzle that had 35 pieces and said that was more at my son's level. Okay. After the egg hunt, he was not that interested in putting the puzzle together. There were too many pieces and he was anxious to just get to the basket. It wasn't hard, although since it was printed on paper, the pieces curled and it was hard to attach them without each piece shifting. I helped my son put the puzzle together because it took too long and I had to nurse my daughter who was crying with my husband. He solved the riddle pretty quick and went and grabbed his basket. He was happy and then he ate some yummy chocolates :) Later on in the day, I boiled a bunch of eggs and he painted them. It's sort of our Easter tradition now. 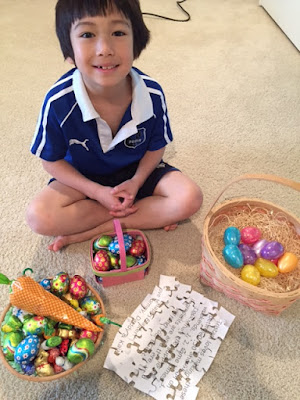 I cooked us a special meal consisting of a vegan Chinese tofurky,  stir fry broccoli, egg salad, and store bought fish sticks and sweet potato fries. I also baked us a carrot sheet cake. Easy peasy. It was a tiring day for me this past Easter Sunday but knowing that my son and family was happy made it all worth it. Hope you all had a nice Easter with a little yumminess too :)
Labels: chocolate Easter