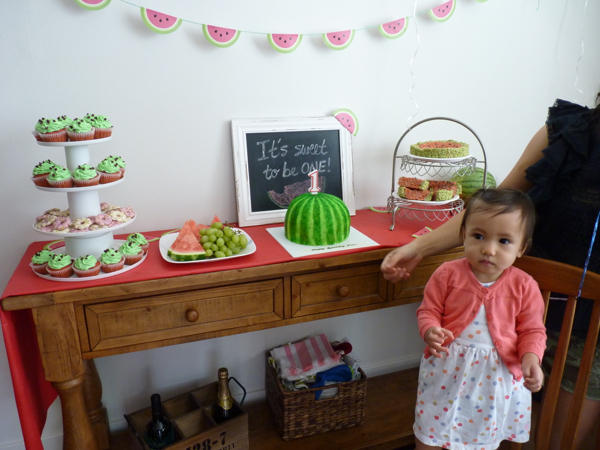 This past weekend was my daughter's first birthday. Crazy, I know! Originally, I wasn't planning to do much since I had no time with my 7 year old at home with us all summer. I only started thinking about this party two weeks ago and only decided on what I was going to do a week before. I'm so used to planning inside food since we're all Winter and Fall babies here but our daughter is actually a late summer baby. Woot! Barbecue, here we come!

We really haven't had many barbecues this summer and I have been wanting to invite some of our neighborhood friends over for one. This was the perfect opportunity to throw a barbecue and combine it with our daughter's birthday celebration. We normally go overboard with the food for barbecues so we could easily feed everyone. The watermelon and end of summer theme came to me since we have been eating a lot of watermelon lately. It was simple enough and in the end, it turned out pretty darn cute too. 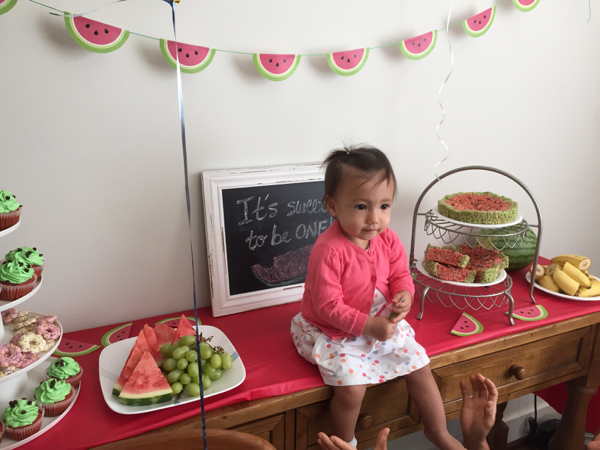 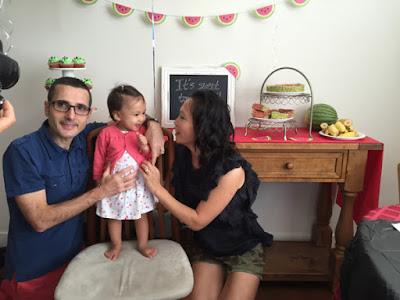 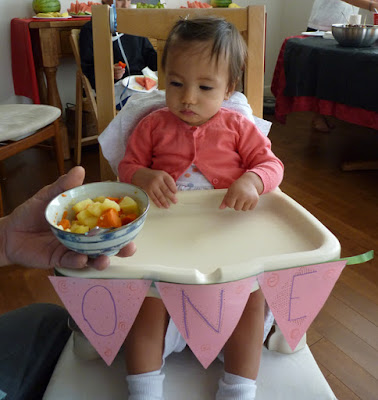 We had 23 people attend our party, three of them were babies though. The nice thing about these early birthdays is that we don't even have to think about games for entertainment since babies can't do much still. No loot bags to worry about either. This was just going to be about the food. And a few decorations. Yay.

Here's the menu I had for the party:

The lunch food was great but it's the same stuff we always do. I wanted this party to be easy. Lol. Some of it was new for our guests though. I made almost everything from scratch, except for the pita bread, flower cookies, and chips. The chicken souvlaki was really popular. I should have made more of that since the kids liked it. The food we served wasn't really kid friendly but I figured there had to be something in there the kids would eat. Apparently, that was the chicken. 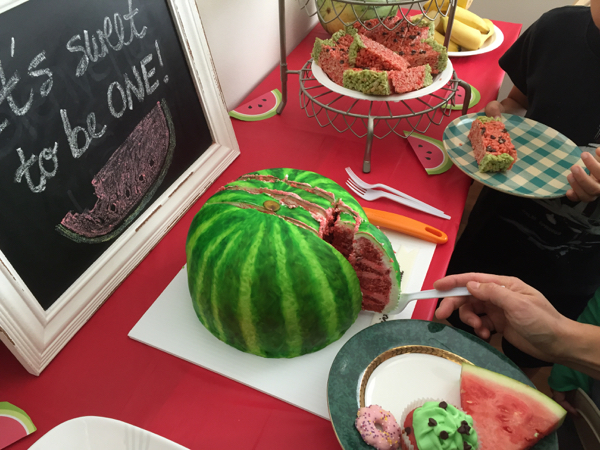 I was happy with how the cake turned out. It was my first painted fondant cake so I wasn't sure how it would turn out. I was careful to roll the fondant a bit thicker this time and I put the cake in the fridge before and after applying the fondant. Even with the imperfections here and there, the cake still looked good overall in the end. I was a bit worried because I ran out of red food coloring and I knew the cake was actually pinker than it should have been. No one seemed to mind. When you think about it though there is so much variation in how watermelons look inside and out that it was just fine. The cupcakes with the cream cheese icing were delicious. Ah, yes. Red velvet is still one of my favorite cakes. 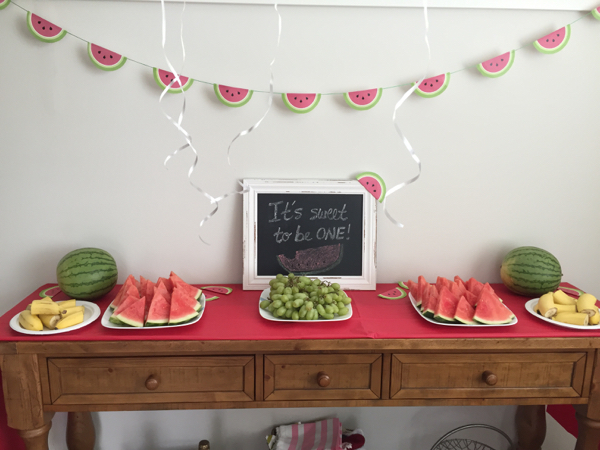 I loved the watermelon decorations! The weather had been strange lately so we were so lucky that the sun came out for us the day of the party. The day before, it just poured. I heard that buckets of rain fell and it halted traffic on the highway. Lucky us. The watermelon decorations and colorful fruit and desserts made it a pretty party theme for our girl. Especially, when the sun came out. I loved the gold ONE balloon we got as well. We had color balloons to match our watermelon theme and the house just looked so nice. The colors were very Christmas-like too but it worked well for the end of summer! 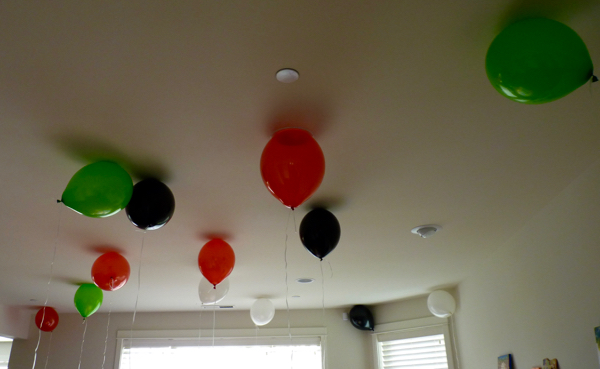 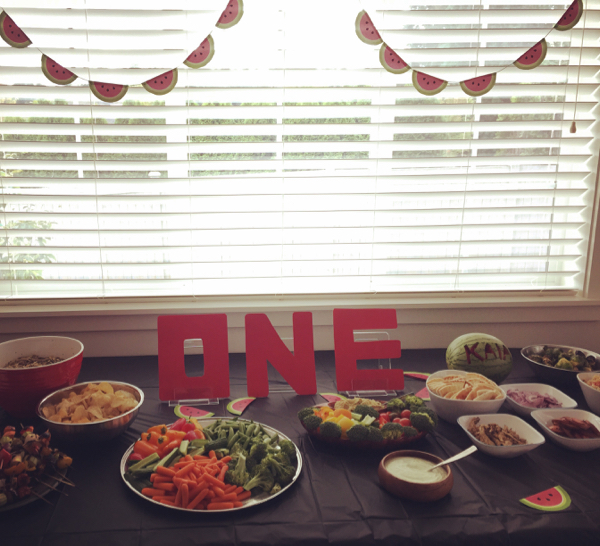 No one commented on it but I loved the food table display. I worked on the red ONE sign during the week. I spotted a gold version on Pinterest and loved the idea so I copied it with a version I created from what I could find from the dollar store, Daiso. It was hard to photograph the table with the sun behind it but I thought the sign and food looked great on top of the black and red tablecloth. 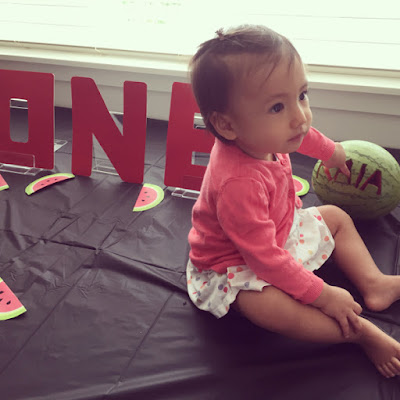 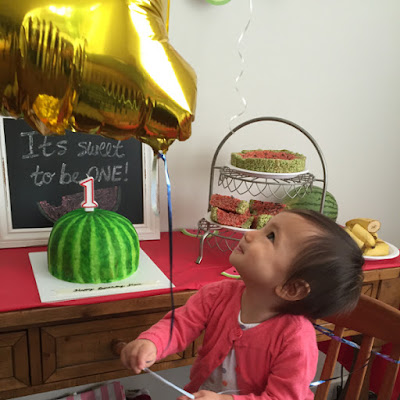 I used a red tablecloth for the fruit and dessert table since the watermelon and cakes were very green. The chalkboard had a sweet message, which I also copied from something I saw on Pinterest. Lol. I found a nice watermelon garland pattern online, printed it in color, and then got the kids to put it together. It was a nice and quiet craft to keep them busy :) I got my niece to carve our daughter's name on one of the small watermelons as decoration for the table. That looked great too. Everything just came together so I was happy. I kind of wished we took more pictures though. We don't even have a family picture. Boo. Guess we were enjoying ourselves way too much this time :) Happy 1st Birthday to our sweet baby girl! And happy 1 year parenting anniversary to us (again) for surviving the first year! Phew.
Labels: barbecue birthday cake cupcake rice krispies theme cake watermelon