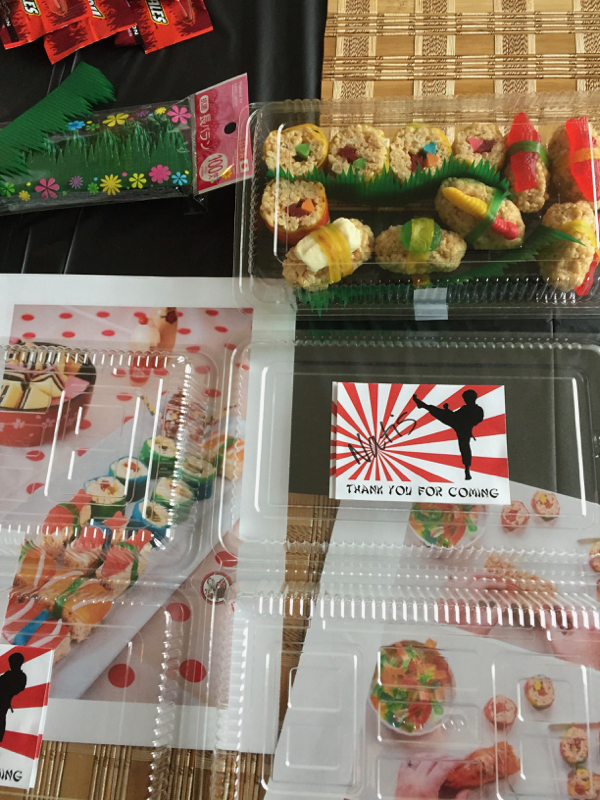 Our son is now 8 years old. We had a party for him but it wasn't crazy like the previous years. We barely did anything and we even ordered food. Right?! In fact, we almost didn't have a party at all because he's been naughty lately and my husband was scared his friends would trash our place. Lol. He's scared that every guest would trash our place but honestly, our son has wrecked our place more than anyone else. However, he does behave worse when there are guests over. After some negotiating, we decided to have a small party with just a few close friends of his. 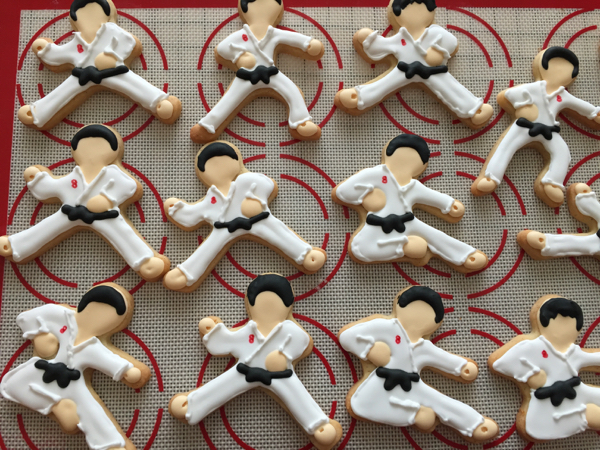 We signed our son up for martial arts lesson over the summer for a few months and he really enjoyed it. When we were brainstorming themes, I thought we could do something along those lines and have an Avatar party or Ninja party. I looked into a party lesson at our martial arts center but we didn't know enough kids to invite and it was just too expensive for what they offered. Every year, I find myself researching and toying with the idea of a party venue and every year, I decide it's not for us. I would rather spend that money on a nice gift for our son instead. He would have just as much fun at a party at home with his close friends. And nothing beats the convenience of staying home and customizing your own party without rules. Especially with his baby sister here too. On his actual birthday on November 20th, we had a martial arts party at home with five of his close friends. 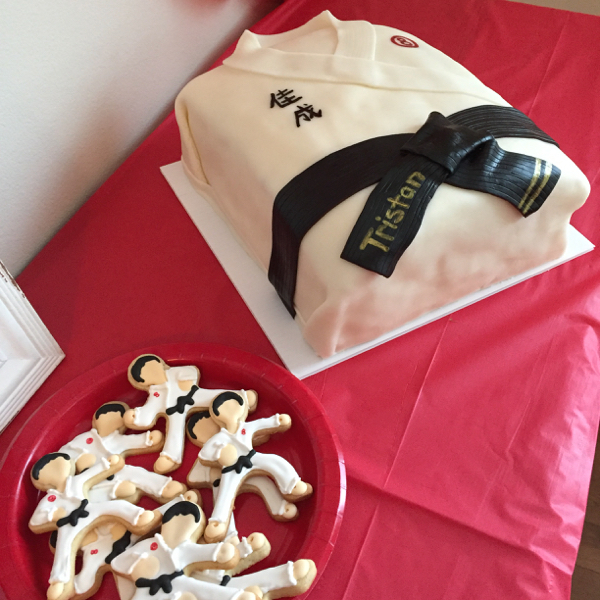 I made a theme cake and customized some cookies for the party. That's it! We ordered pizza for food and then I did a food craft with them. Boy, I would have loved to cook Chinese food and all but the kids probably wouldn't eat it. They must have their cheese pizzas and nothing else, right? For entertainment, we bought some sumo bumpers and a martial arts kickboxing game. We also had martial arts video games and if they really wanted we had the Kung Fu Panda movie too.


My husband said that the food craft was a great idea. Woot?! I agree! I found everything I needed at Daiso as well and we got to use up our Halloween candies :) I have always wanted to make candy sushi after seeing them on Pinterest. Nothing is prettier and cuter than candy sushi. The end results were just like the images I saw and the boys seemed to have fun. It was a bit messy but it was worth it! 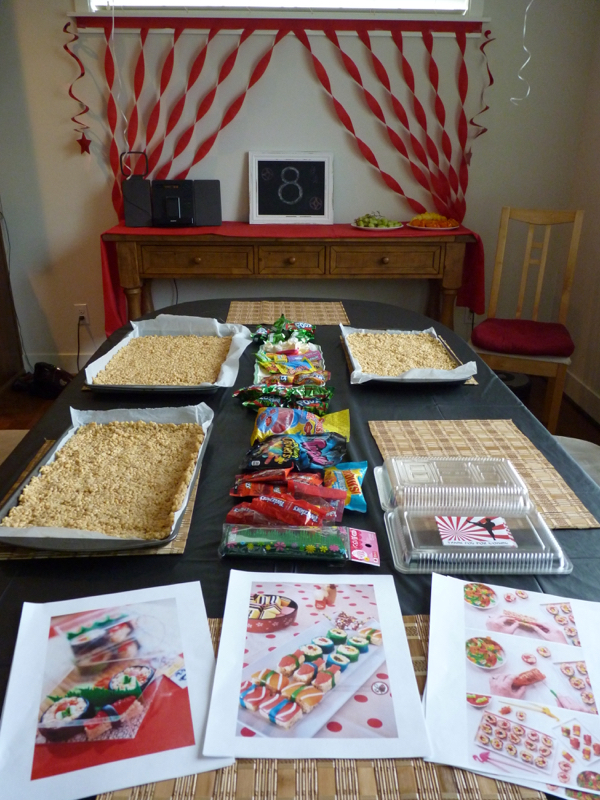 We printed out some nice color images I found online to give the kids some inspiration and ideas. I made two batches of rice krispies (with less rice krispies for a softer, chewier, and more workable version) right before the party started. I was able to press and fill three parchment lined cookie sheets with the rice krispies. We used scissors to cut them into rectangles with parchment paper hanging off of them so that they would be easy to remove. I set up the candy sushi bar with an assortment of fruit-roll ups, gummy worms, Swedish fish, Nerds candies, Starbursts, gummy bears, licorice etc. Minutes before the craft, we made a few pieces of sushi just to see how it would work and to showcase as demos. We cut up some of the fruit-roll ups to make it easier for the kids. I prepared a bit of chocolate fondant as well, in case anyone wanted to roll their sushi using that. They were fine with just the colored fruit-roll ups though. 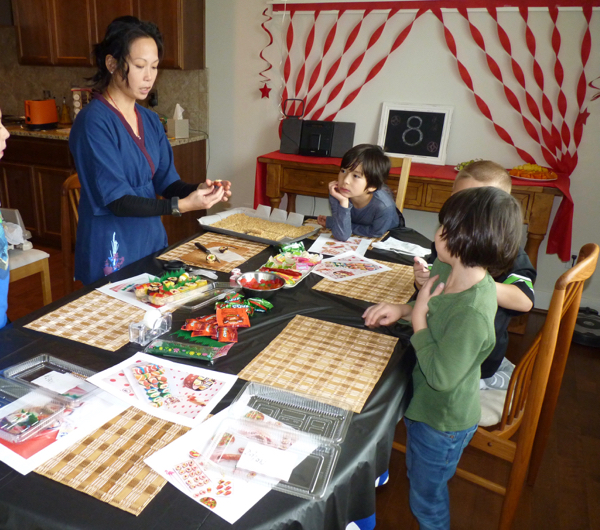 During the craft, I was there to demonstrate and help the kids make their sushi. I had a cutting board station and I assisted the kids with the slicing, if they needed help. When the kids were done they washed up and went to play. I offered to fill their sushi containers with more candy sushi, if they wanted. The containers were kind of big. Ahem. It was fun and we used up all the Halloween candy, which was awesome! Every kid got to take home the candy sushi container that they made. I also gave them each a bag of karate sugar cookies as part of their party loot.

The party wasn't too out of control. What I find is that if there is a structured activity and supervision, the kids listen and actually do very well. I supervised a friendly sumo bumper match and everyone played fair and had fun. It looked like fun and I wanted to try it too! It's when you let them go free range without adults interfering that they start trashing the place. Let's not forget they're 7 and 8 year old boys after all.
Labels: birthday candy loot bag marshmallow rice krispies sugar cookies theme cake