Touring Las Vegas with Kids and Eating at Buffets 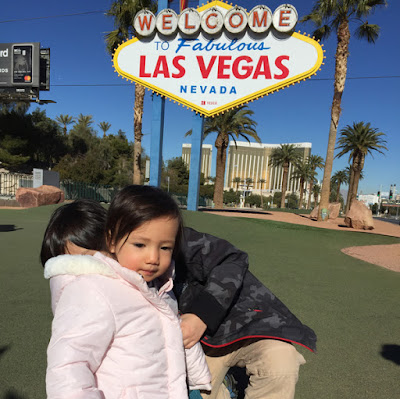 Just before Christmas and as an early celebration for my birthday, the four of us went to Las Vegas for a week. My husband and I haven't been back since 2007. We stayed right on the strip and although it was considered low season, it was still very busy. Las Vegas never sleeps too. There are shows even on December 25th. It's definitely a happening and exciting place. Giant billboards, ads on top of every taxi, and everywhere you look on buildings and all those lights! They really go all out there. Our 8 year old was super excited being there for the first time. It was quite different from his usual Hawaiian vacation. Lol.

It was our 16 month old's second flight. Like the first one we took with her back in May to Maui, it was alright. Not great and not that bad either. Although on the way back it was hell for us since my husband and I were both suffering from food poisoning. Oh god. That story probably deserves a separate post of its own. It was only a 2 hour flight back but it was pure hell.

Despite our rough journey back, going to Las Vegas with the kids was surprisingly great. I mean it could have been better but we got to do a lot and we pulled it off. As I often tell my husband, a lot of parents in our situation probably wouldn't even try because it's too hard. Traveling together is hard work but as long as we don't anger many others along the way, that's a win for me!

We rented a car for a few days so we could explore the nearby parks outside of the Vegas strip. We visited Ethel M Chocolate factory and the holiday lights at their cactus garden. We shopped at Costco and Trader Joe's. Boring but it saved us a lot of money. Initially, we wanted to go to the Grand Canyon but we decided it was too far to put our baby through the car ride. Instead, we hiked near Mead Lake and saw the Hoover Dam. We hiked in the Valley of Fire (totally awesome!) and Red Rock Canyon (meh). The four of us watched V The Ultimate Variety Show and then my 8 year old and I went to Paranormal: The Mind Reading Magic show. We all visited the Marvel Avengers STATION. We just watched Captain America Civil War on DVD so that was pretty cool to see all the costumes. It was more for kids than adults though.

Vegas may be known for its entertainment but their buffets really steal the show. Let's be serious. You cannot go to Vegas without experiencing one of their epic buffets. Just like how the strip tries to mimic the world with their fake mini cities, buffets offer food from around the world too. Something for everyone and it's brilliant. Were they expensive? Yes, they can be. But you would likely pay more if you were to eat at a good restaurant on the strip. Vegas is just expensive. At least on the strip, which was where we stayed. Over the course of the week, we ate out maybe five times and three of them were at buffets.

Our first buffet was the Garden Court Buffet at Main Street Station downtown. The only reason we went here was because Vegenation was closed early for a holiday party. We were tired from hiking and we just had to eat somewhere. Last time I went there back in 2007, I remembered I was impressed by the amount of food I saw and how cheap everything was. I wasn't an extreme foodie back then though. I have much higher expectations now and found myself rather picky about what I ate. There were a few things that were quite good so I just kept going for those things until I was full, instead of trying more things. When it came time for dessert, I shared a few things with my husband but I would have to say that none of the desserts were worth saving room for. This restaurant was actually the best of the three buffets that we tried for the kids because of the simple dishes they offered. Our 16mo was able to eat just plain steam vegetables, baked yams and other simple foods like that. She ate a lot too, which was awesome. Our 8yo ate quite well too but it was his first big buffet so he was ready. Lol. It was a weekday dinner and the bill for the four of us was $38.90. Our 16mo got to eat for free but our 8yo had to pay an adult fare. The meal was so cheap though so who cares! 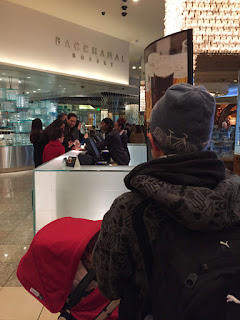 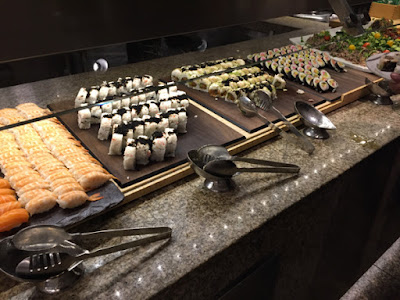 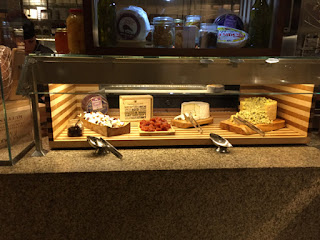 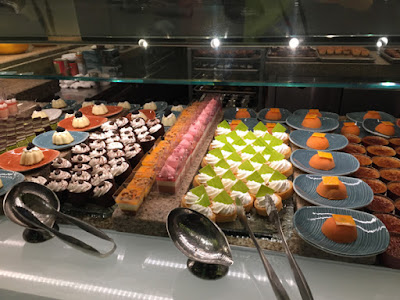 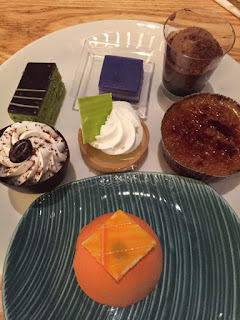 Our second buffet was a giant leap from the first buffet. This was massive in both quantity and price. What else would you expect from the great Bacchanal Buffet at Caesars Palace. It was a holiday weekday and we went for brunch and our bill came to $149.21, without any alcohol. Our baby was free and our 8yo had the kid's discount. Note that buffet restaurants, at least the good ones on the strip, raise their buffet prices during the holiday. The closer you get to Christmas and even New Year's, the higher the prices go up. We got admitted around 11AM and we didn't have to wait at all, which was nice.

Bacchanal Buffet must be the mother of all buffets. There were simply too many choices. Too many good choices, that is. This was as close to any fine dining buffet we have ever experienced. I read that there are sometimes 500 different offerings at this place. 500! Now for comparison, we visit our neighborhood Thai buffet on occasion and that place offers maybe a dozen things to eat. Crazy. In the two hour limit that we had to stuff ourselves, we pretty much ate for the entire day. And a part of the next day as well. Another bite, I probably would have puked. Lol. We taught our 8yo well because his first plate of food was a lot of seafood. Then for his second plate, he stacked it full of pancakes and waffles. Ugh. There wasn't much for our 16mo. Everything was just too fancy and had seasoning. She ended up chowing down on plain croissants, multigrain bread sticks, and fruit. Just carbs. Oh well. It's one of those famous places you just have to experience. If you don't go to this one, there are others like the ones at the Bellagio or the Wynn. I hear they are all epic. If you don't go during the holidays, it will be much cheaper too. 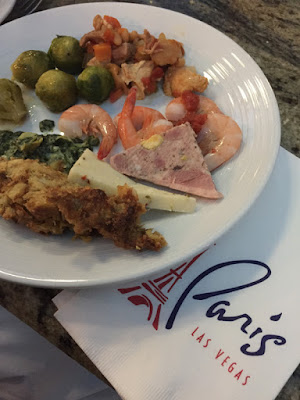 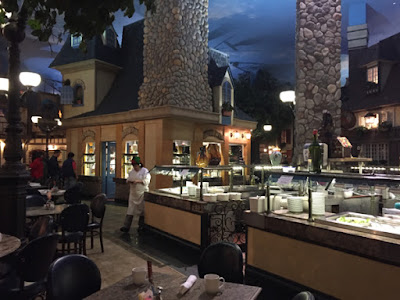 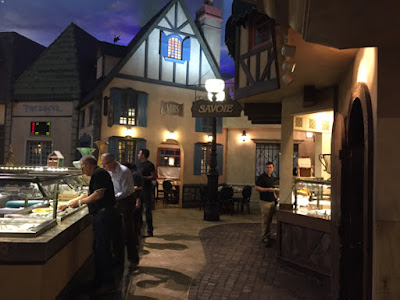 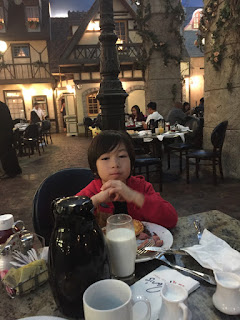 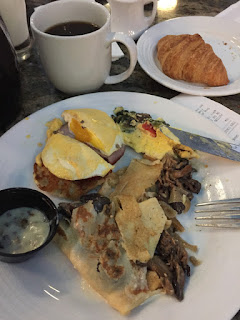 Our third and final buffet was somewhere in between the first and second in terms of quality and price. We went to Le Village Buffet at the Paris Hotel for a late breakfast. We were admitted at 10:30AM so were able to enjoy some of the lunch offerings that started at 11AM as well. If there is no break between breakfast/lunch or lunch/dinner, you can definitely do that and pay the lower price. There was an omelette and crepe station where you just order what you want and they make it in front of you. Anything you would expect to find at breakfast, they pretty much offered. There were quite a few different selections of sausages from France. The pastries were a bit disappointing, considering it was supposed to be French. They even had stuff that wasn't typically French like sushi. It was the best looking buffet we've been to. The restaurant was designed to look like you were sitting and eating outside in a small French village. The stations were split into different regions of France and it was just charming. The bill for the four of us came to $61.61. Our toddler was free and our 8yo had a discount. 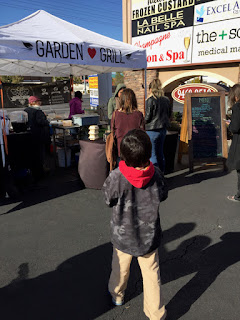 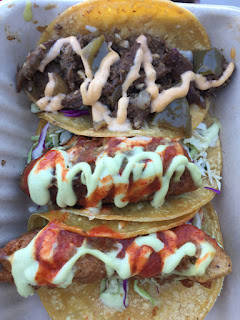 The two other times we ate out were at fast food places at the Garden Grill and at the Shake Shack. We had to chase the Garden Grill down since it was the last market day before they closed. We tried so many things and they were indeed delicious. Everything was plant based and vegan. The avocado tacos and California burrito were my favorite. The Shake Shack was tasty but after we were done, we had to visit a juice stand. Haha. I don't think I have eaten a cheeseburger in like 10 years. We had no idea the Shake Shack was a fast food restaurant. My husband, son, and I all had burgers and fries for dinner and there was nothing healthy on the menu. It was a last minute decision to go there since it was close by and I heard it was family friendly. I was surprised to see a lot of other families with small children there as well. I wondered if they were as surprised as I was to find the place was in fact a junk food restaurant.

Overall, we had a good time in Las Vegas with the kids. Las Vegas is so different than anywhere else you would travel to and it's exciting for both kids and adults. We would totally go again. Maybe next time, our kids could eat more. Lol. The nearby deserts were beautiful and I was surprised there weren't more people hiking and exploring the areas. If you don't believe me, check out some of our pictures below. Amazing! The strip is cool and all but you have to leave the strip and explore the Valley of Fire! It's a 1 hour drive but it's beautiful there and there are plenty of short hikes for family with small children. It reminded me of Mars and underwater caves. All those lovely rocks were just asking to be climbed on and I have never seen my 8yo so excited about any hike before. Seriously, it was pretty cool.


Alright. I bet you are dying to know about our food poisoning story, aren't you? No, I don't think we got poisoned at the buffets. You're safe. However, if you overeat, you may just puke. That's a different thing altogether. For us, I think we have narrowed it down to the fresh pasta we bought from Trader Joe's earlier in the week, which we tried to finish the night before our flight home. It was the roasted vegetable ravioli and porcini mushroom ravioli. My husband and I got super sick but our kids were fine. Our 8yo barely ate any of his pasta that night. I was the first one to vomit in the middle of the night. I felt crappy all night and couldn't sleep at all. After puking twice, I was just weak and nauseous for two days and didn't eat a thing. My husband started to vomit on the plane ride back. Hey, there is a first for everything! Yup, pure hell. Especially with a tired toddler jumping all over you. We made it back alive to tell the story at least.