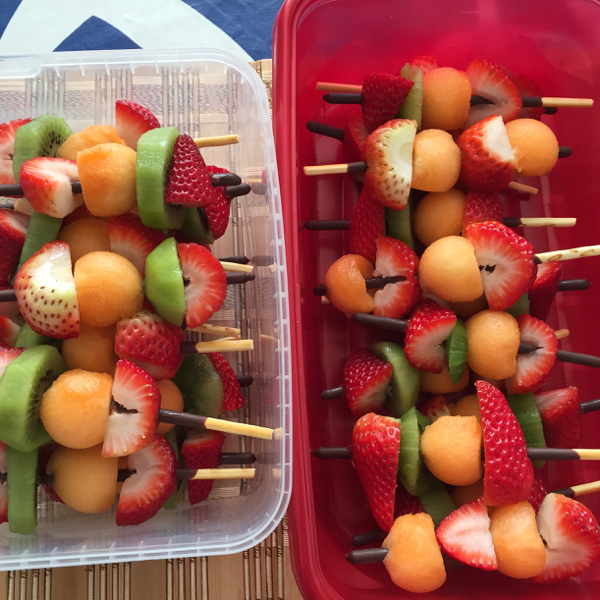 I volunteered to provide all the food for all 24 kids in my 8 year old's class this past Valentine's day. No one offered to make or buy anything so I just volunteered to do everything. Sadly, this year is the first year I am not able to attend any parties because I cannot bring my toddler along. Last year, we didn't have many parent volunteers to help at the party so I had to work out a schedule with my husband for him to temporarily leave work so I could host the parties at school. This year we have a good team of room parents. Thank goodness!

As long as I'm a room parent, I cannot allow the kids to eat store bought treats. Plus, it would cost so much more if we had to buy the cupcakes or cookies from the store. For the Valentine party, I provided two kinds of bakes and two kinds of fruit. Another parent went out and bought juice boxes. 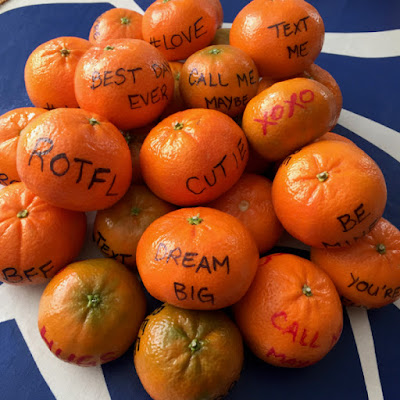 I knew I wanted to have mandarin oranges presented as "conversation cuties" and something else. Chocolate covered strawberries would have been nice but it seemed a bit small and I wasn't sure if everyone liked strawberries. I always like variety so there is something for everyone. Then I thought of just small fruit skewers with fruit cut up using small cookie cutters. That's simple enough but it turned out, I didn't have any small cookie cutters for Valentines. Crazy, I know. My husband then suggested I use pocky sticks. But I figured they wouldn't keep long since they would get soggy. He said they would if I just kept all the fruit on the chocolate side. Good point. So we bought some and I tried it out. It definitely had potential.

After the trial day, I knew what I had to do. The sticks were short so I didn't want to cut shapes out of the fruit using cookie cutters (besides, I didn't have any cutters!) or they would be hard to pierce or they would break. Yes, this was tested. I had to cut the fruit thick and they couldn't be very wide either or the whole thing would be unstable and awkward. Funny. What began as a simple idea was turning into a tricky task. 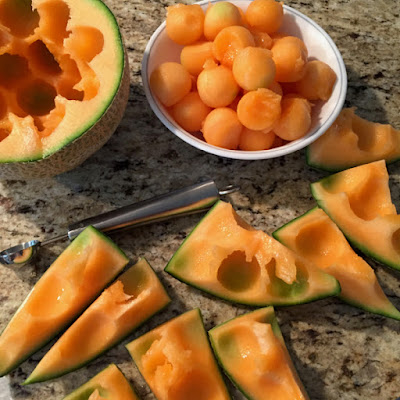 So I decided on these three colorful fruit: strawberry, kiwi, and cantaloupe. With the cantaloupe, I scooped out cantaloupe balls. Not only were the balls pretty, but they were also easy to pierce and held well on the sticks. The strawberries and kiwi were just sliced about the same size so everything would look balanced.

A few hours before the party, I precut everything and laid them on paper towels to dry. I wanted to keep the fruit as dry as possible. Then I pre-pierced everything using a metal skewer and chopstick. Yes, you need to do this! Don't even think about piercing the fruit directly with the pocky stick. I didn't even try because I knew what would happen. Every time I pierced through the fruit with my metal skewer and then chopstick, I would use more paper towels to dry off the fruit. Keep everything dry! Some of this then went to the fridge until I was ready to assemble. 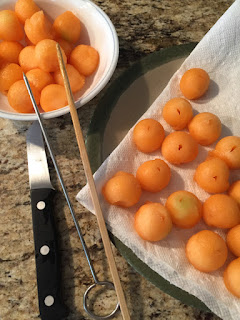 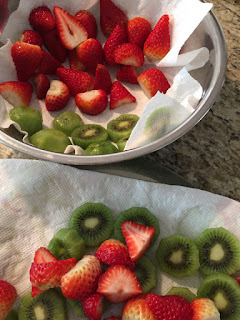 One pack of pocky sticks is not enough to make 24 skewers. I used 1 1/2 packages of pocky sticks to make roughly 27 fruit kebabs. In the process, I broke about 5 sticks. Of the three fruit that I chose, kiwi was the softest and wettest fruit so I wanted to sandwich that one in the middle. I had more strawberry than anything else so I used a piece of strawberry on either end. It worked out well and they were so colorful. I also had the nice side of the strawberry showing on top. Okay, that is such a detail but that's just me :)

When I was done assembling the sticks, I put them in the fridge for about 30 mins to 1 hour before I could leave the house. The fruit kebabs were dropped off school 1 1/2 hours before the party and I just told the teacher to keep it away from any heat. I also sent an email to the parent volunteers to use the food glove I provided to serve the fruit kebabs and to carry them by the fruit in the center, instead of grabbing at the end of the stick. 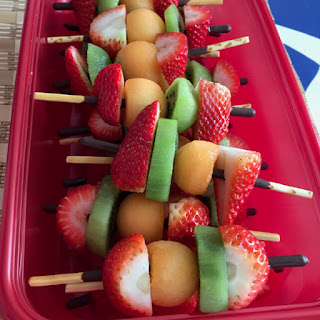 My fruit kebabs were so cute and of course they were delicious :) When I asked my son, he said that none of the sticks broke when they were passed out and everyone ate them. He also said that some of the kids didn't know they could eat the stick but he told them they could. Lol.

Of all the food I brought to the school, the fruit kebabs were the trickiest ones to make. But totally doable :) Here is the list of the ingredients that went into making these adorable fruit skewers.

It wasn't all healthy but everything was homemade. I also made rice krispie treats and cookie bars for the kids.