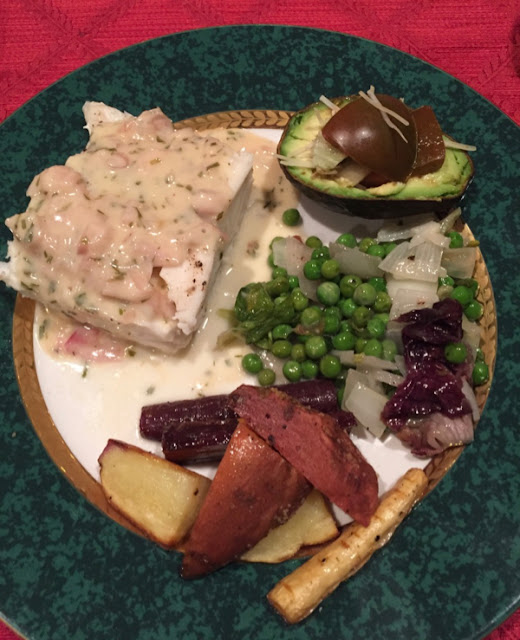 Over the holidays, my parents, my 14 year old niece and my 11 year old nephew stayed with us for over a week. During their stay, the kids cooked breakfast one day and then planned and made a three course meal for us on New Year's Day. Which also happened to be my birthday meal. But my niece, nephew and 10 year old son are inexperienced chefs in the kitchen. Like really inexperienced.

A day off for me in the kitchen on my birthday sounded so nice but supervising them turned out to be a lot of work. The boys even made their own panic button in case they needed rescuing. Lol. The thing is I'm the only one on the planet that knows the kitchen and pantry. I know what we have, where everything can be found and apparently the only one that can operate every appliance and machinery at home. So sad. So no such nice break for me.

I'm embarrassed to say that my 10 year old does not share my desire and passion to learn the craft of cooking and baking. He helps here and there when he is bored and feels like it but that is rare. I often invite him but he would rather read or play on his Switch. Another turn off is that he doesn't enjoy the cleaning part. I tell him that cleaning up afterwards is part of the cooking process. Obviously, it would be much less work for me and much faster if I were to do everything myself in the kitchen but then the kids would never ever learn a thing. It's sort of like potty training. It has been a pain to potty train my 3 year old and it almost seemed easier for us to just keep changing her diapers forever. But after a few painful months of running her to the toilet every 5 minutes and washing up accidents, she learned to potty herself and all that work WAS worth it. Thank goodness.

The kids must learn their way around the kitchen and know a few basics of cooking before they become adults! They must. Seriously. We don't want them to become Nailed-It contestants when they start their careers in life. Especially when they come from families that can cook well. So the kitchen will be dirty and good ingredients will be spoiled a bit but that is all part of their learning adventure and I just have to deal with it. I told the kids my only rule is that they have to leave the kitchen the way they found it. Normally, you should leave things better than how you found it but I'm not going to ask that much from these kids just yet. Ha!

I gave them a few of my cookbooks to look at for inspiration and ideas. I told them to get ideas but they didn't have to use anything in the books and they could search online for materials as well. I told them they couldn't do pasta (since I was planning to do plenty of that already) and the meal had to be well balanced and not include any mammals. Poultry or seafood would be fine. Over a few days, in between hours of lounging in front of the tv watching shows and playing video games, they decided on a three course meal. They made an ingredient list and I took two of them grocery shopping. I ended up shopping for everything myself at the store since they just wanted to run around. Not surprising.

On cooking day, they were each responsible for a dish and worked together to create the dessert. They were really keen on making a cake so instead of letting them pick a bad cake recipe, I just gave them my trusted chocolate cake recipe and Swiss meringue buttercream. My 10 year and 11 year old nephew made and decorated the cake. They each had a go at separating egg whites and yolks and had trouble. Even 14 year old had trouble. I had to step in and do most of the frosting after that since I knew it was going to be too tricky for them to nail. And I really didn't want to waste too many eggs and butter. Lol. This was the only time I really interfered. My 14 year old niece made chocolate bark that was going to be included as decoration for the cake. They all had a good laugh in the end because the cake was nothing like how they imagined it to be. As you can see below.

My niece made the main dish and roasted root vegetables. My 10 year old prepared a side dish of peas and onions. My 11 year old nephew did an appetizer out of avocados and tomatos. Together, it tasted good and exceeded my expectations! We ate everything that was served but probably could have eaten more. I told them when you spend hours cooking a meal, it's good to cook enough for leftovers because it's so exhausting and you don't want to have to repeat the work. But to be fair, I really didn't want to buy that much halibut. That stuff is so expensive! It took the three of them over 4 hours with a bit of help from my parents and myself to delivery this dinner.

The kids set the table, cleaned up, took turns hand washing dishes at the sink and cleaned the floor. However, I had to clean a bit more after them because it wasn't done well and I couldn't stand the mess in the kitchen. Lol. Overall, I think it was a good experience for them to go at it with minimal help and be proud of what they created. Great job kids! And I think this experience along with all the cooking and baking shows we have been watching on TV has sort of spearheaded my 10 year olds desire to be more involved and learn more from me in the kitchen.
Labels: birthday cake fish kids cooking