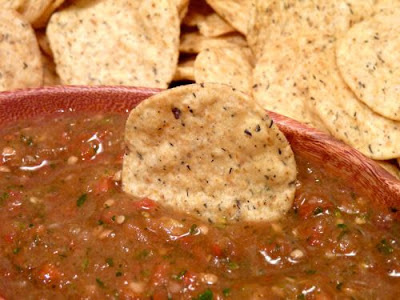 When I was living in Paris, I met this really nice American couple who shared their salsa recipe with me. It was delicious! It was chunky, thick, and just full of flavor. It was my first time making salsa and it was so easy. You had to cook it until it thickened, much like homemade pasta sauce. It was so good I thought I was done. Why try any other recipe when this one totally rocked, right? Well it turns out that I just discovered an even easier recipe that is also awesome. Easier definitely wins! Yeah, I can be lazy like that.

Over the summer, my mom and dad brought us a ton of their home grown tomatoes from Victoria. I don't know the name of the tomatoes my parents grew but they don't sell them at the stores. They bought their plants at some flea market near Victoria and they are very tasty. You can snack on them just like plain fruit, which is how my mom usually eats them. We tried planting tomato plants from Walmart one year ourselves but they didn't taste very good. They were somewhat tasteless but we were new at gardening and we did a crappy job too. The store bought tomatoes tasted much better. Lol. My parents, on the other hand, take great care of their garden and every year, we get free organic produce from them :) They do live in Victoria so we don't get produce often but it's always nice when they come over to visit us! This year I made a lot of salads with their tomatoes but then I got sick of salads. We still had a lot of tomatoes left and they were all getting super ripe. I had to throw them into the fridge while I thought of something else I could do with them.

One night I made quesadillas and I wanted a quick and easy salsa to go with it. I found a restaurant-style salsa that didn't involve any cooking so I tried it out. Like with so many of my recipes, I improvised my way through it since I didn't have exactly what it was asking for. Instead of using canned tomatoes, I used my parent's fresh tomatoes. It was perfect since it used up A LOT of tomatoes! Since the tomatoes were small, I used nearly 35 of them for the recipe. I know! I actually had enough to make this recipe a second time. Lol. Guess what? I still have a few more tomatoes left. 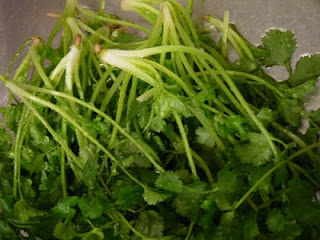 This salsa recipe is raw and therefore healthier than the cooked salsas. What's also great is that you don't really have to pre-cut anything before throwing the ingredients into the food processor. If you don't have a food processor, you need to get one! A big blender could work as well. I quickly washed my tomatoes and threw them in whole. So easy. Remove the skins and tips of the garlic and throw them in whole. Same with the onion. You get the picture. Another important ingredient this salsa has that many others don't have are cilantro roots. I never cared for cilantro roots until I read how awesome and flavorful cilantro roots were :) Thanks Chef Heidi for the tip ;) Now when I buy cilantro, I always search for the bunches that have the roots attached. Wash them well and then throw them into the food processor.

This salsa is fresh and will taste even better the next day, once all the ingredients have time to soak together. Using the best of each ingredient will also make a difference. 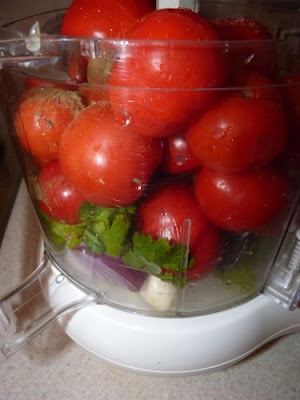 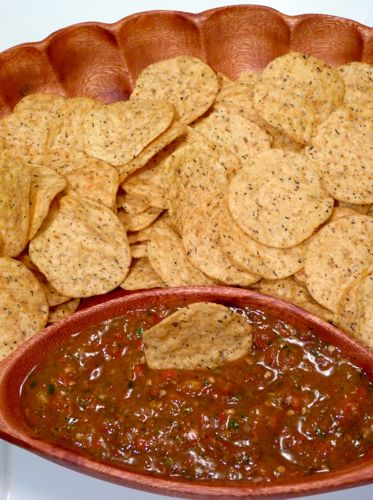 Throw everything above into a food processor and turn it on for 2-3 minutes until all pureed. Store in fridge for at least a couple of hours before serving. Serve with tortilla chips or along with any Mexican dish that involves dip.
Labels: appetizer dip garlic tomato vegan