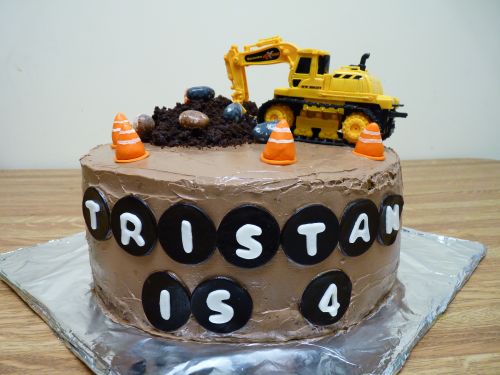 My little boy is turning 4 years old tomorrow! This past weekend, we threw him a construction themed birthday party and invited all his friends from daycare. It was pretty cool, fun to plan and super tiring to implement. But we did it so hooray for us! :)

Over a year ago, I saw this amazing construction cake on Pinterest. It looked super easy to do since it was a big construction mess on top and the inside was the coolest thing I have ever seen inside a cake. I knew I had to do it and I just couldn't wait until the day I would throw a construction party for my boy. So yes, I settled on a construction theme just so I could make this cake! Ahem. Luckily for me, I have a typical little boy who loves everything construction as well :)

I made two 10 inch round cakes: one in chocolate and one in white. I dyed the white one a bit yellow. I was running very low on yellow food coloring. Oh boy. I used Bake Even Cake Strips

around each cake when I baked them so I could get maximum height out of them and so they would cook somewhat flat on top. Those baking bands really do work! The downside was that the cakes took an extra long time to bake. Between the cakes and cookies I made that day as well, I think my oven was on pretty much all day. It felt like that anyway.

I used a cake leveler

to completely level off the tops of the cake and to ensure they were both at the same height. The chocolate cake that I leveled off was saved for "dirt" crumbs for decoration. The leftover white cake was frozen for another time. Maybe I'll make cake pops out of them later. For the "dirt," I spread the chocolate cake pieces on a tray and baked them for about 15 minutes. After removing them, I left them on the counter to cool and dry a bit more. Then it was just a matter of breaking them apart and crushing some pieces to make it look more like "dirt." 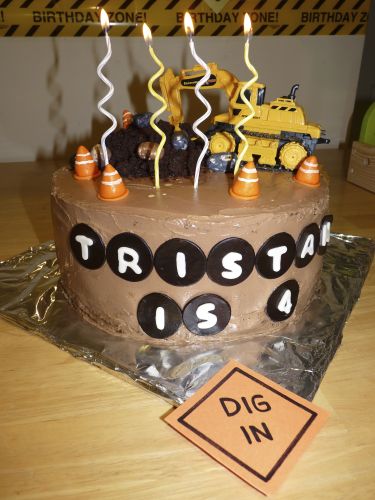 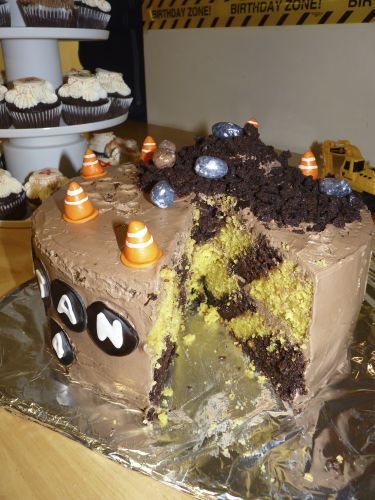 A couple of days before baking the cakes, I made myself some caramel. The really delicious caramel from the Tartine book :) When it came time to assemble the cakes, instead of icing between the angle layers of the cake and having it ooze out, I brushed caramel in between the layers. The assumption was that the caramel would just get absorbed and keep the cake moist. Besides I only had enough icing for in between the two horizontal layers and the outside of the cake. It turns out that a 10 inch cake is HUGE! And two of them together is very heavy.

The site that inspired me to make this cake has a great description and photos on how to get the cool slanted construction look inside the cake. I probably should have followed the instructions more carefully myself! Basically, you need to make the cakes beforehand so that they can be cut and assembled without breaking apart. Cut at a 45 degree angle all the way around. It was hard to measure so I just eyeballed it and hoped for the best. Now that I see the picture again, I should have cut closer to the edge as well. Big oops. The lines didn't exactly line up for me but depending where you did cut the cake, some of the lines did line up. Lol. Hopefully people got the idea and they appreciated the fact that I "tried" to get the cool construction look inside the cake. 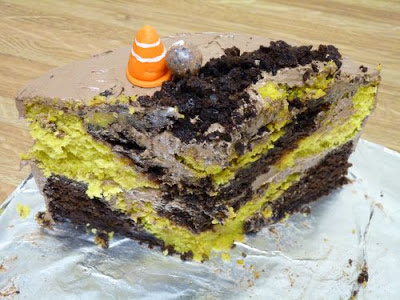 I scooped out a bit of the top of the cake and dumped it off to the side on the top, then I finished icing the cake. I forgot to photograph on the side where you actually see a hole in the cake. The digger really was digging people! I should have taken a picture from directly above too. Oops. It's funny though because I found myself already taking a lot of pictures of food at the party. Probably more than the party itself. I wonder what my adult guests were thinking :)

The cake was delicious. All the flavors came together beautifully and it just tasted great. It was super moist and fluffy and it ended up feeding a lot of people. Each slice was very tall. At room temperature I was cutting them fairly big so that they would not break apart but from the fridge, you can slice them thinner and they will still hold up. It actually tastes good cold as well.


Some people like cake but some people prefer cupcakes. I always end up making both now. At the party only five cupcakes were eaten. Cake definitely won. Cupcakes are nice though because they are individual servings and they always look pretty stacked up. They make a beautiful decorative piece for the table too. Don't you agree? :) My little guy and me had fun making the cupcakes. The toppers were fondant and since I was running really low on yellow food coloring, I had to resort to painting to stretch my colors a bit more. I had to paint some of my sugar cookies for the same reason. Painting is a lot faster than cutting more fondant or icing in each separate color too. 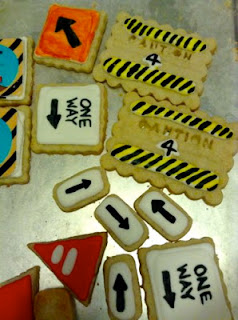 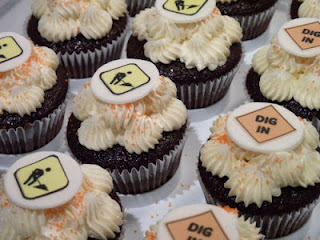 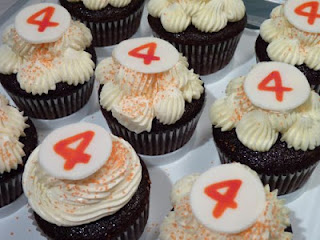 In addition to the cake, I ended up making 32 chocolate cupcakes and around 100 lemon vanilla sugar cookies. The cookies were favors too but we still had plenty for the party. There were construction and road signs, arrows, and "caution" cookies. I chose easy designs since I knew I would be pressed for time. They all turned out pretty nice anyway. When it came time to present the dessert, I was running so late that I got my parents and brother to lay them out on the table for me. I told them to please put them "nicely" on the plates and cupcake stand. When I came back, I saw that the cookies were sorted like playing cards and then stacked in piles on two small plates. I gave them four plates to lay them out. I was horrified! Some of the cookies weren't even oriented to face the audience. What the heck?! Ok, if you are a foodie too, you would totally understand why I flipped out a bit. The cupcakes were smudged a bit too when they were moved over. Aw man. I quickly adjusted things and all was good after that :) See what a stay-at-home-mom has turned me into? I was not like this before. Seriously. 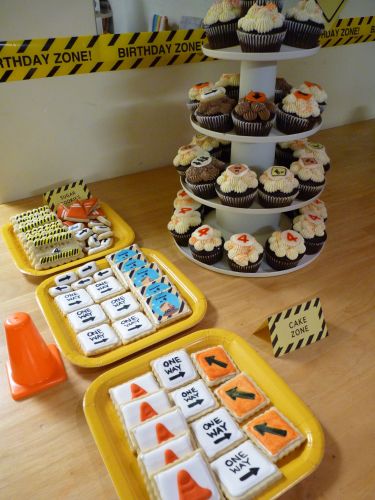 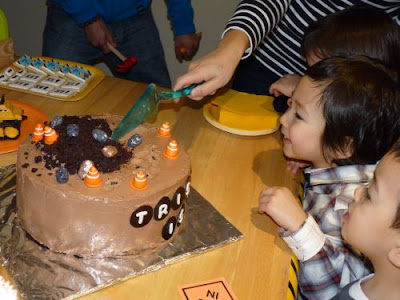 The "cake zone" at the party totally rocked. I thought it looked so cool with all the decorations together. It's just too bad the light by the table was burned out :( When it came time to cut the cake, all the little kiddies were hunched up close to the table. The anticipation in those adorable 3 year old and 4 year old little faces while they waited for their piece of cake made all the hard work worthwhile. I loved it! It was another party success :)
Labels: birthday cake chocolate cookies cupcake decoration dessert fondant painted cookies sugar cookies theme cake vanilla