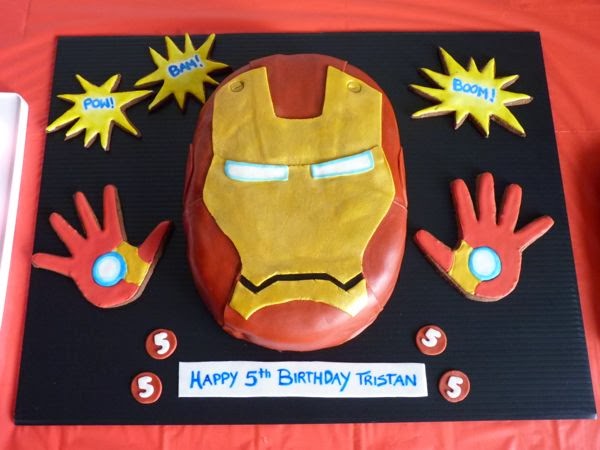 My little boy turns five this week so this past weekend we threw him a birthday party. FIVE is a huge milestone and it seemed like a good time to have a superhero party. Since his favorite superhero is Ironman, I decided just to focus on Ironman. 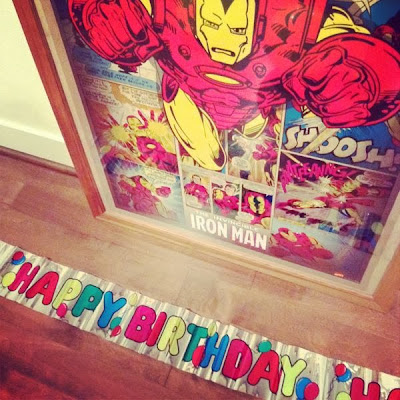 We're in Redmond now so this year we had a completely new group of people attend his birthday party. We invited everyone in his new daycare class but only one person accepted the invitation. This was quite the change from last year, where everyone but one accepted the invitation. In comparison, this year's party was very calm and relaxing. I actually got to socialize a lot, which was a luxury :)

We decorated the house with lots of balloons and focused on using gold, red, yellow, and black for colors. We bought a helium tank to inflate the balloons too so that was a lot of fun. Thanks to Pinterest, we decided to surprise our birthday boy by filling his bedroom with balloons before he woke up that morning. However, we missed his reaction when he actually woke up. I couldn't believe it! Dang.

The balloons and decorations were great but we didn't exactly do what I had in mind. We totally toned it down because we didn't want to tire ourselves and we didn't want our new friends to think we're too crazy. Lol. I bought all the stuff for the decorations but when I described what I had in mind to my husband, he just laughed and said "no wonder people never want to invite us to any of their parties!" Yeah, okay. It was just a cool idea. I have a whole board of cool birthday ideas from Pinterest! But yeah, okay. 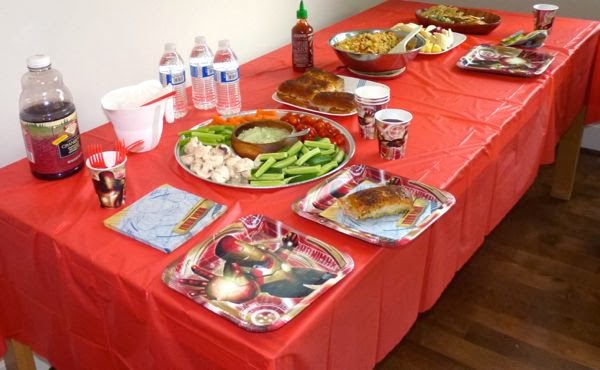 In fact, we had just the right amount of food. For once I didn't go overboard. The table wasn't even filled with food. Shocking, right?! Everyone seemed to have liked the food.

After eating lunch, we played some games. We had three games initially but then we decided just to do two. In the first game, kids had to attack the Ironman villains with their weapon of choice. I printed out six Ironman villains and taped them onto empty water bottles. We had a nerf gun, bow and arrow and small bouncy balls. We placed the bottles throughout the room and the kids had to take turns trying to hit over the villains. At least that was the idea. It just didn't happen. For the game to work, ALL the kids had to cooperate and take turns to attack. But they all wanted to attack right away and at the same time. Fail. It's too bad since I spent quite a bit of time preparing for the game. I even got my boy to dress up in costume and do some target practice days leading up to the party. Oh well. We ended up just drawing for a prize. 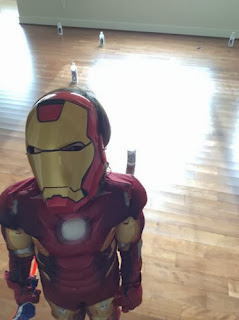 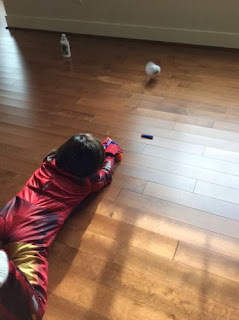 In the second game, we tested their super senses. We placed four objects in a paper bag and got each of them to feel the objects and guess what they were. We used lego, crayon, toilet paper, and a sticker. We also tested their sense of smell. We blindfolded them and let them smell four things and again, they had to guess what they were. We used lemon, banana, chocolate, and cheddar cheese. This game went along better and we only involved the bigger kids. Partial success and we got to give away another prize!

Then came the desserts. I had fun making the bakes. My boy had fun baking along side me too.  He used to only have patience for about 30 minutes when it came to rolling, cutting or decorating cookies. Now that he's a bit older, his attention span is longer. He was at it for over an hour. Maybe even a couple of hours. How exciting! 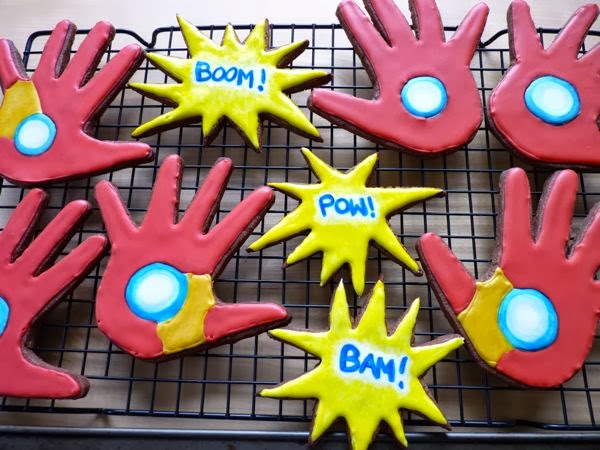 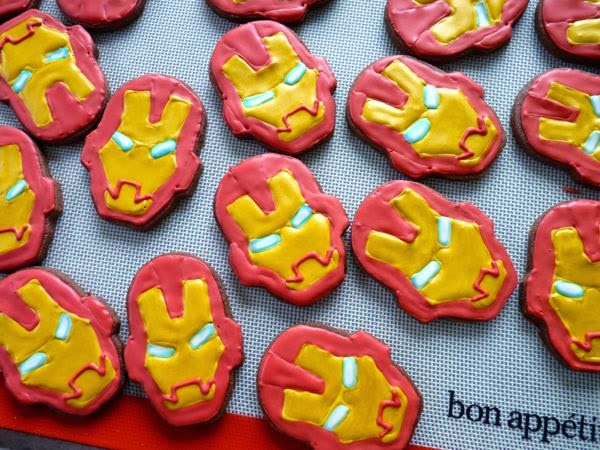 My Ironman cake turned out alright. I should have shaped him more but I got lazy and I didn't want to waste more cake. I say "more cake" because I miscalculated how much cake I needed and made WAY too much. Oops. My husband called the cake a "chubby" Ironman. Lol. I totally agree! The cake I pictured looked better of course but in the end, it was the best I could do. I was a bit worried about things turning out since I haven't baked much for awhile and I was using a new kitchen and all. I did screw up here and there and things took me longer than I expected. There were plenty of imperfections but the taste of the cake made up for it, I think. It was my standard chocolate cake with chocolate swiss meringue buttercream, covered with marshmallow fondant. The best compliment I received was from one of the moms who said the cake tasted "awesome!" She was like "this is just chocolate cake? Nothing more? Wow." I don't think she ever ate a homemade cake made from scratch before. Lol. That totally made my day :) 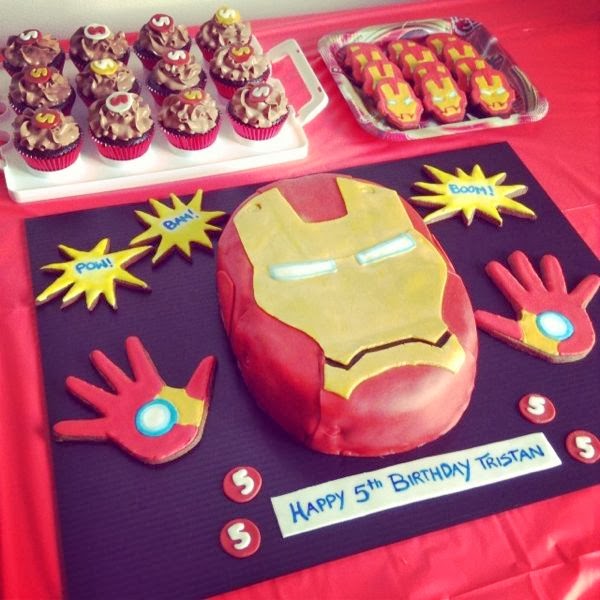 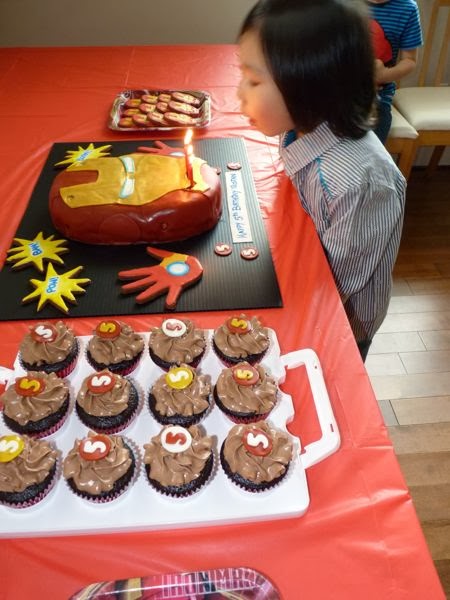 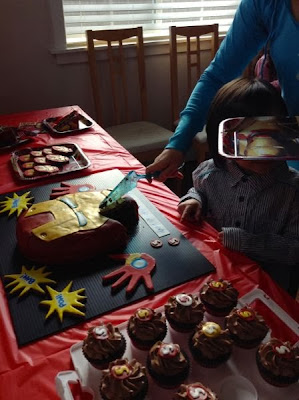 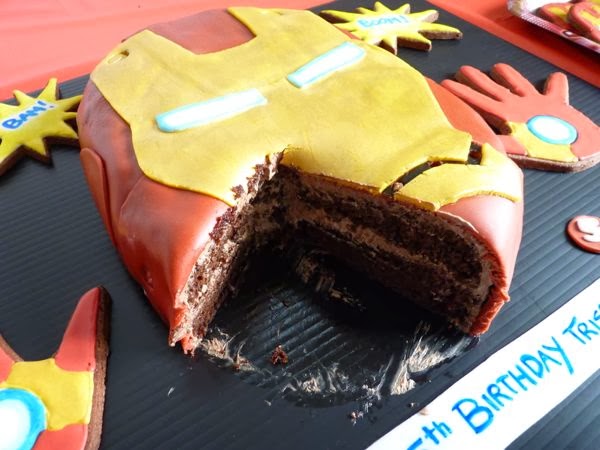 Thanks to the Ironman cake, I now know how to color food gold :) I love the gold color I achieved on it. I started by adding yellow to my fondant. Then I added just a tiny bit of brown. That alone made a pretty nice gold. I took it further by spraying it with gold Wilton color mist. After that dried a bit, I painted it with Americolor gold sheen airbrush. I used the Americolor gold sheen airbrush on my chocolate sugar cookies as well and that turned out nice too. I'm looking forward to using it again next month to make my Christmas cookies shine with gold and pearl glitter! 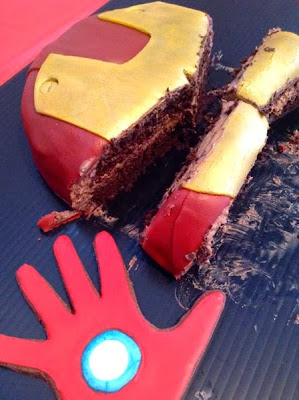 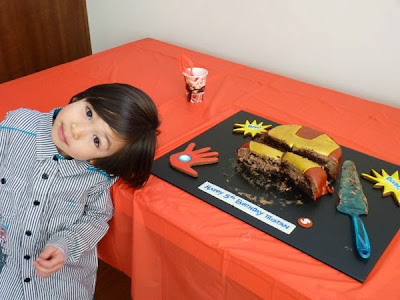 I can't believe my boy is turning five. He's growing up way too fast! I want him to grow big and independent but at the same time I miss the little baby him. He's no baby anymore. Turning five is such a milestone because it's also the start of school. That, of course, also makes me sad because he is not in school right now:( All because we moved from BC. Had we known he couldn't start school here because of his birthday, we probably wouldn't have moved honestly. I personally feel bad having made this mistake but we can only move forward and concentrate on the positive things. I have to believe that things will get much better. Speaking of positive things, it was SUPER nice to be able to throw him a birthday party in a bigger living space. A bigger house definitely eases the pain of relocating here :) 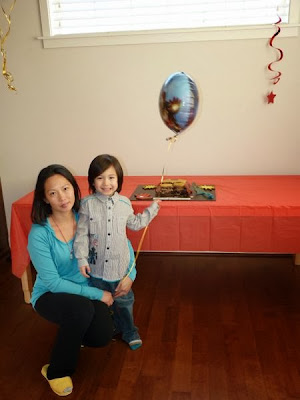