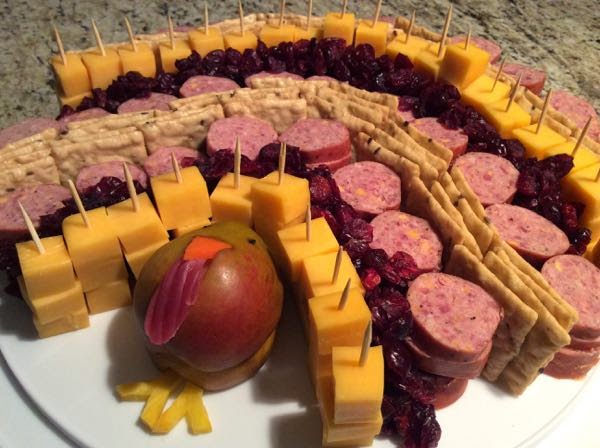 Now that we live in the USA, we get to celebrate American Thanksgiving in November as well as the usual Canadian Thanksgiving in October. Today, the kids are having their Thanksgiving feast at school. The teachers asked parents to bring in a snack to share with the class.

Most people that know me would expect me to bring in a dessert. I figured a lot of people would bring in dessert so I decided to bring in something else. Unfortunately, it's processed food but it is finger food material and I know the kids will eat it. I also wasn't in the mood to prepare anything that would take a long time. Yup, I was lazy!

I found tons of turkey shaped platters on Pinterest and thought they were adorable. The veggie platters are colorful and awesome but I think I could only serve them at home. I know for a fact that there are some pretty picky kids at school who just wouldn't eat that. I hate to waste food so I decided on a cheese, sausage, and cracker platter. Almost every kid will eat that, right? Except for the one vegan kid in my son's class.

I was inspired by this photo of a cheese and fruit platter I found on Pinterest. I thought it was well presented and it had good colors to represent the wings of the turkey. I didn't want to use fresh fruit because I wanted to assemble it the night before and I didn't want the platter to be wet and soggy. I did use a fresh pear for the turkey though since it was a great idea :) As I was slicing up the pear, I tried to keep it as dry as I could with paper towels.


For the turkey, I bought the smallest pear I could find since I didn't want it to take up that much space on my platter. I ended up buying a tiny seckel pear. I cut out turkey legs out of a yellow carrot and the turkey beak out of an orange carrot. The red thing that hangs under the turkey's mouth (snood and wattle) was made out of soft strawberry licorice. I cut and banged it into shape :) I carved off a part of the pear so that the beak could sit securely in the pear. It worked out great too because the licorice was sticky and stayed on well. You can use anything similar like red fruit roll ups. I only had licorice at home. I made tiny slits in the upper left and right of the pear and carefully stuffed it with black sesame seeds for the eyes. My finished pear turkey was so cute :) 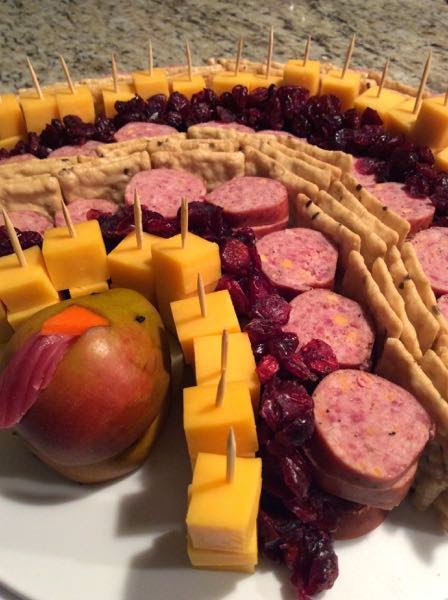 The platter consisted of Tillamook medium cheddar cheese, craisins, beef and cheddar sausage, and brown rice and flax seed crackers. I stacked up three chunks of cheese and secured it with a toothpick. I also stacked up 3-4 slices of sausage. I wanted to fit quite a bit on the platter so I had to make everything slightly high. The only way I could secure the craisins were to pour them in between the sausages and cheese. The crackers were lined upright so that they would be high and secure. Because of the unexpected height, I had to raise the turkey as well. I used the other half of the pear that I had saved and I cut off a bit of the bulge so that it could sit flat on the platter. I placed my pear turkey on top. Done! Although it was a little uneven here and there, I thought the whole turkey shaped appetizer platter looked pretty darn cool. And seriously, I don't think I could have packed more stuff onto this platter. For a cheese and sausage platter, it was getting pretty heavy! Lol.

Here was the finished product. Hope the kids love it! 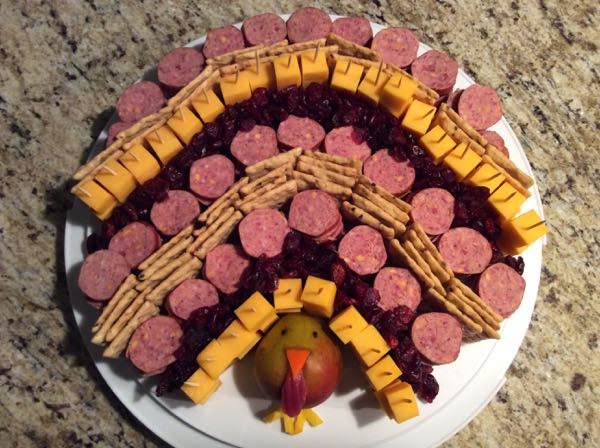