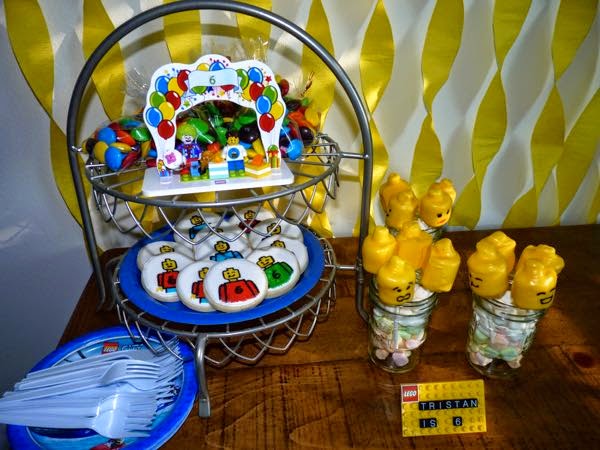 Happy 6th Birthday to my little boy! Today is his birthday :)

This past weekend, we celebrated our son's 6th birthday with a Lego-themed party. It reminded me a lot of the construction party we had when he turned 4. There are so many cool ideas for these themes in terms of decorations, fun foods, and games. Because of this, we decided on another home based party so that we could customize it the way we liked. One of the moms commented on how brave I was for hosting so many kids at home! There's nothing easy about it but I think we pulled it off just fine. Now we have six years of hosting home birthday parties under our belt! :) We're practically experts. Lol.

Every time we throw one of these parties, we want to tell ourselves "never again!" Although super fun for the kids, it's exhausting and stressful for the host parents. Kind of like camping really. Ha ha, it's so true :) We did look into several birthday venues but they were so limited for times, number of kids, what they could do, and their no food policies were a big bummer. Plus, they're terribly expensive and some just didn't seem appropriate for a Lego-themed party. Of course there are perks to having a party outside of the home but a Lego party just seemed like it should be held at home. Our son has been playing with Lego since he was 2 or 3 years old and now just felt like a good time to have a Lego themed party with his friends.

I started thinking about the Lego party after Halloween. Halloween was crazy because this year I joined the Room Parents at school to plan the Kindergarten's class Halloween party. I had no idea what to expect since it was my first year but it turned out that I had to do way too much. It just ended up that way because other parents were busy but it kind of taught me a lesson in volunteering. Lol. After that, planning another party was the last thing on my mind. But I forced myself to work on the Lego party. Oh, the things moms have to do for their children! 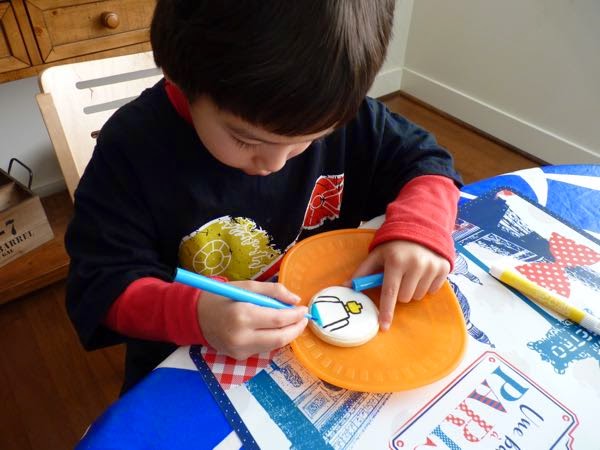 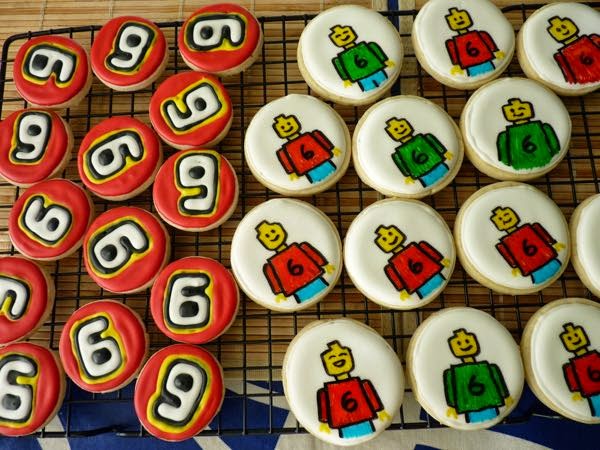 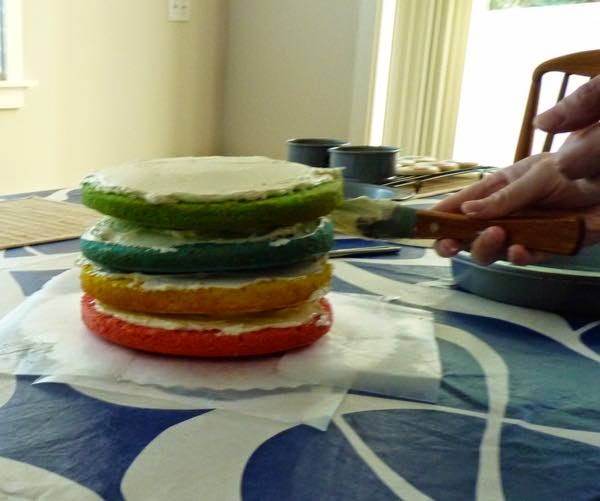 We were a little uncertain about the whole party since only two kids had accepted their invitations a week before the party. My husband even suggested we cancel the party since there weren't enough kids. In the end, everyone we invited came to the party. This was what happened at our construction party too! Luckily, we only invited 8 kids, plus my out of town niece and nephew who didn't come. Nine kids between the ages of 5-7 in total. Totally manageable :)

I had so many ideas for decorations and we made the house so nice that we're going to keep the decorations up for at least another week. We cut out lego people on construction paper and made a couple of banners. My son suggested we also use them for the back of chairs with names on them so that the kids could find where they were sitting. Brilliant! 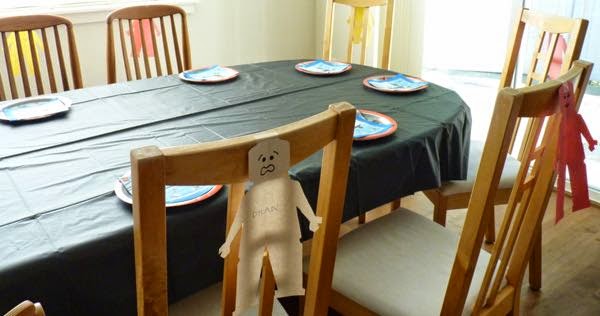 We had tons of color balloons everywhere. Half of them were filled with helium the morning of the party. The helium tank was leftover from our Ironman party last year and it still worked! Woohoo :)  I had a blue table cloth for the party but I was saving it for another table, which we ended up not using at all. Doh! We built a Lego wall out of colored construction paper. We printed a bunch of free graphics off the Internet and only had to photoshop a few things that were missing. Let's just say there is no shortage of resources out there for a Lego themed party. The Lego water labels were the most adorable things I found. 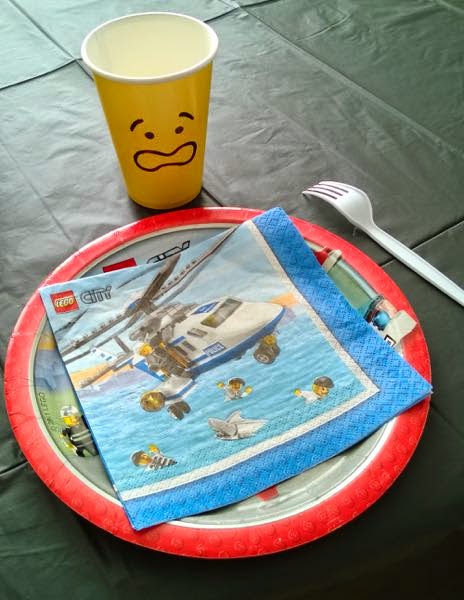 I bought yellow cups and drew Lego faces on them. Classic. We had Lego City lunch and dessert plates and napkins I bought from last year. I felt silly buying them so early but it was a good thing because they discontinued Lego party supplies all together shortly before the Lego Movie came out. What the heck?! Can you believe that? 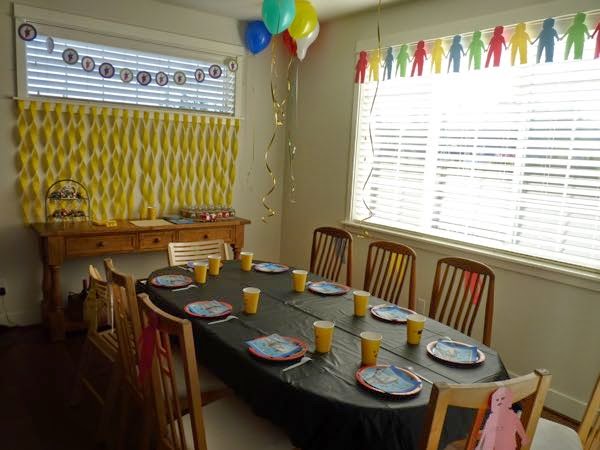 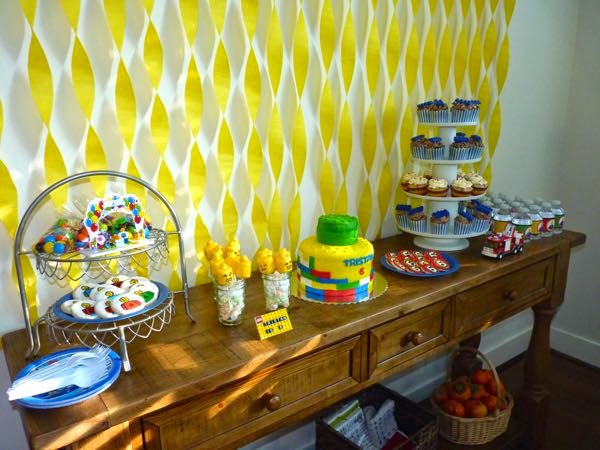 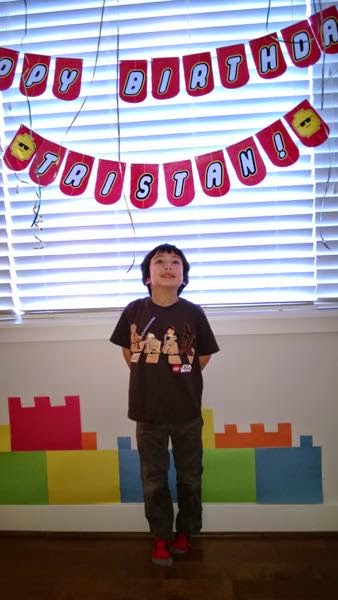 When the kids arrived, I had them color Lego Movie coloring pages while they waited for the others to arrive. They were actually really into this. When enough people arrived, which was around 20 minutes after the party started, we played Twister! I thought of Twister because it looked a lot like Lego and I knew it would be a fun game to start the party with. It turned out it was a good game to teach the kids the difference between their left and right. They are Kindergarteners after all:) The kids paired up and the last pair to be eliminated from the game were declared winners. For every game, we made Lego certificates for the winners. Every winner got a Lego certificate and a bag of mega M&Ms. Easy peasy. 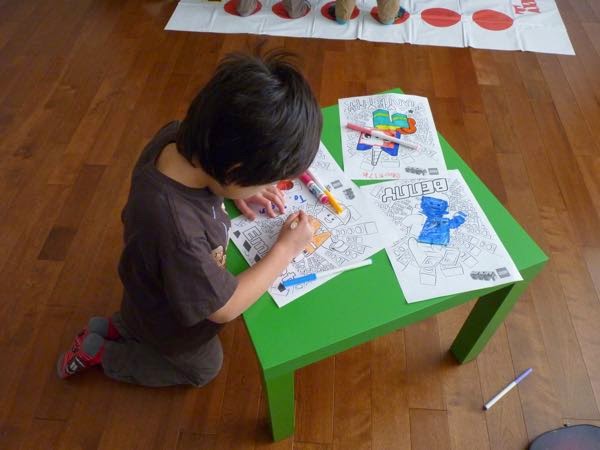 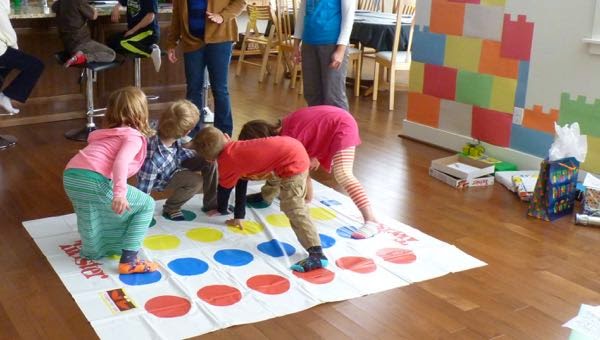 The second game we played was the Lego memory game. We had 16 pairs of identical Lego pieces all randomly dispersed in rows on a couple of square tables. Each piece was covered by a muffin cup. I didn't have anything else that would work but I had a gazillion muffin cups. It turned out they were the perfect size and you can't see through them :) Each player uncovers two muffin cups. If they Lego pieces match, they remove and take them. If they don't match, they cover them back. Whoever ends up with the most matching pairs in the end, wins the Lego memory game. I actually really liked this game. The kids were very quiet but then cheered every time someone made a match. My birthday boy said that this was his favorite game of the party :) 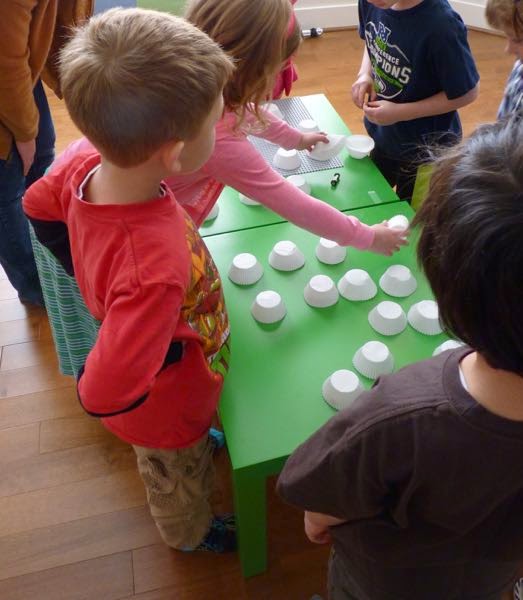 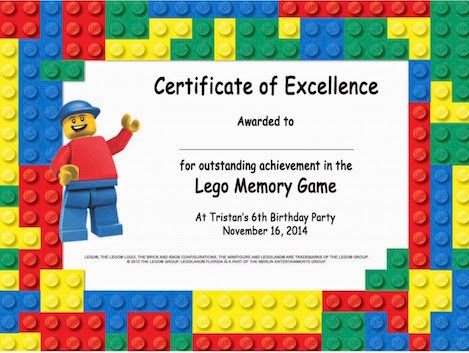 The third game was the Lego building competition. The kids were each given a bag of Lego with identical pieces in them. They had to build four things. We had four certificates to give out for the building competition. I helped him a bit but my good husband was the one responsible for getting the building competition ready :) He came up with most of the games and assembled all the Lego bags. I photoshopped the award certificates. The first thing the kids all had to build was a race car. Then we would test their cars on a ramp my husband put together out of some Amazon cardboard box we kept. He wanted to buy a plank of wood and I told him to use that and it worked out just fine:) All the kids took part in this game. 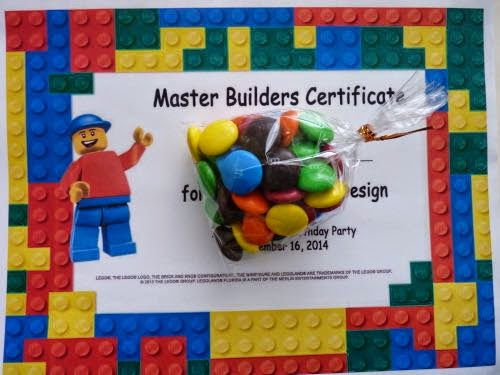 The second thing the kids had to build was a dinosaur. Only about half the kids participated in this game. Maybe they were getting tired by this point or they just weren't really into the task. Oh well.

Then we had lunch. This year, I decided to serve macaroni casserole. It's one of Tristan's favorites and it's similar to mac & cheese, except it has vegetables, ground beef, and potato chips. We had some picky kids that didn't want to eat it but that was expected. I also served pesto naan pizza. Apparently it was a bit too sophisticated for a couple of kids as well. No worries. We had veggies and homemade tzatziki dip, chips and lots of fruit so the kids could at least eat something for lunch. But it's a good thing we compost here! For drinks, we had cute Lego water and Honeycrisp apple juice.

After lunch, we continued with our Lego building games. Next up was the tallest tower. Using as many pieces as they wanted, they had to build the tallest tower that would stand at least 5 minutes on its own. Most of the kids were into this game. 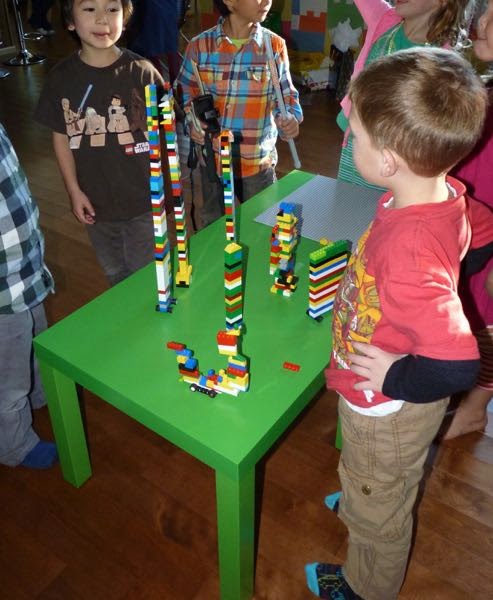 The final thing the kids had to build was a chair. BUT they were going to be blindfolded. Muahahaha. They had to do their best to find the pieces they needed to build a simple chair without using their sight. There were a couple of cheaters but most of the kids were good. Overall, I think this was a great game and it was awesome and funny to watch for the parents :)

Then we had dessert. Or more like a dessert buffet. We had the usual theme cake, cupcakes, and decorative sugar cookies. But we also had marshmallow Lego man pops. We had two kinds of cupcakes: white vanilla and nutella almond. Our boy went from loving chocolate cakes more to loving vanilla cakes more so the main cake was vanilla this year. I would have made everything vanilla except that it required way too many egg whites and I didn't want to deal with so many leftover egg yolks. I already made a batch of ice cream but I still have like 10 egg yolks to deal with. Ugh. 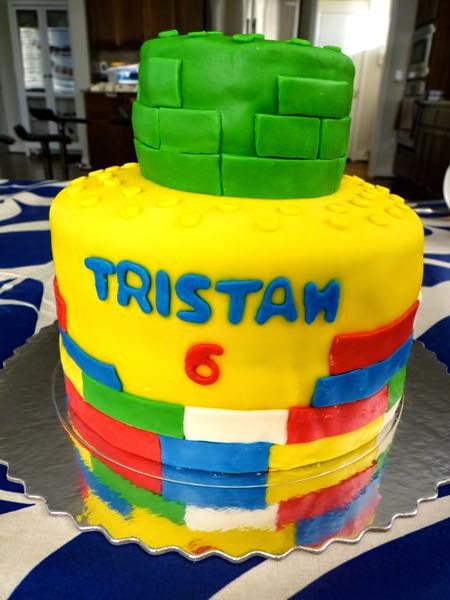 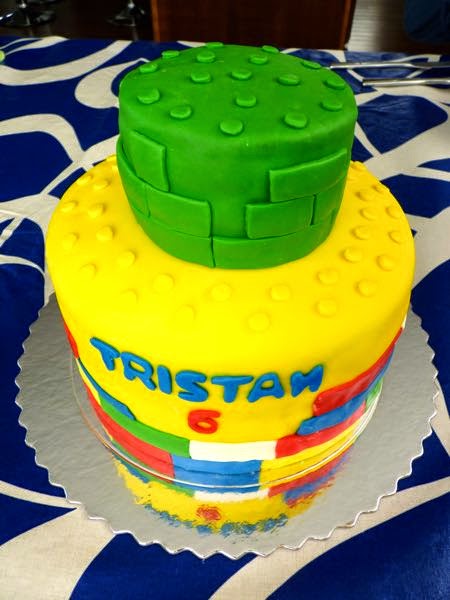 I love the "6" cookies in the Lego font and logo. The Lego man coloring cookie was nice and easy too. The theme cake was awesome! Lego themed parties are like rainbow parties. We had so much color around the house, I just had to do a rainbow cake too. I used red, yellow, green and blue for the cake layers and then iced everything in between with lemon swiss meringue buttercream. Then the cake was covered in homemade marshmallow fondant in the same colors. Boy, did it take me a long time to cover the cake, brick by brick. But it turned out great in the end and it was delicious. It was very moist and the combination just blended well together. I might just use the same recipe for my Christmas cake this year. 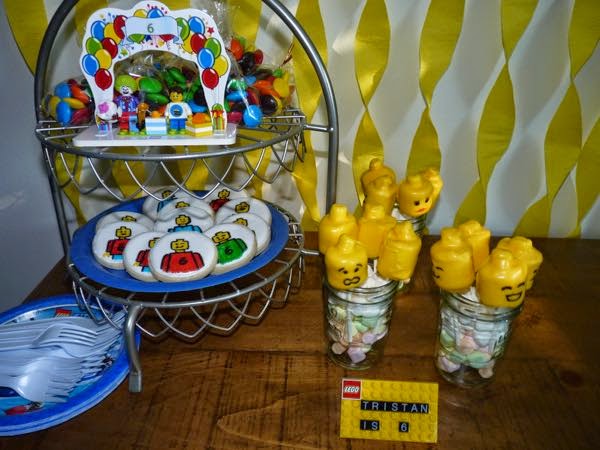 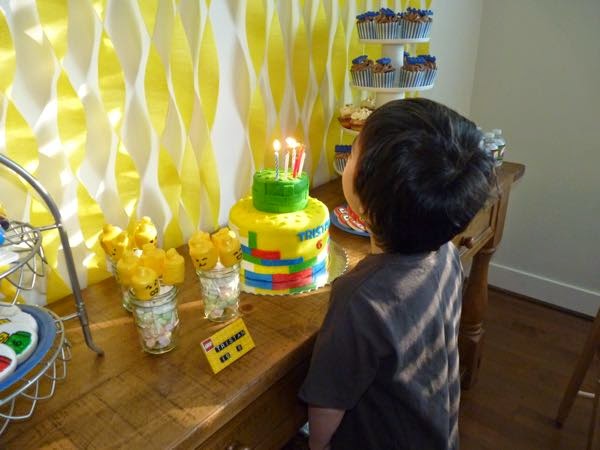 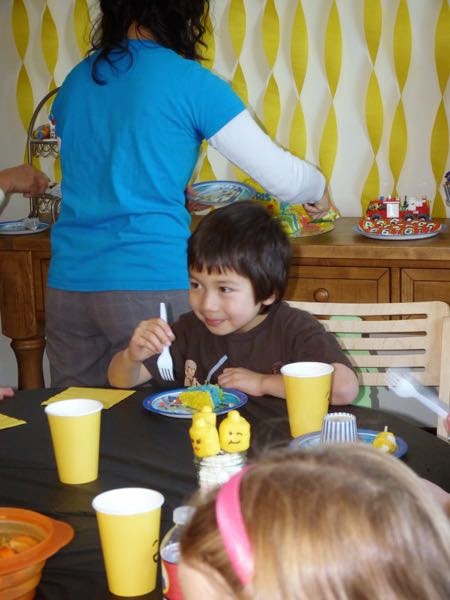 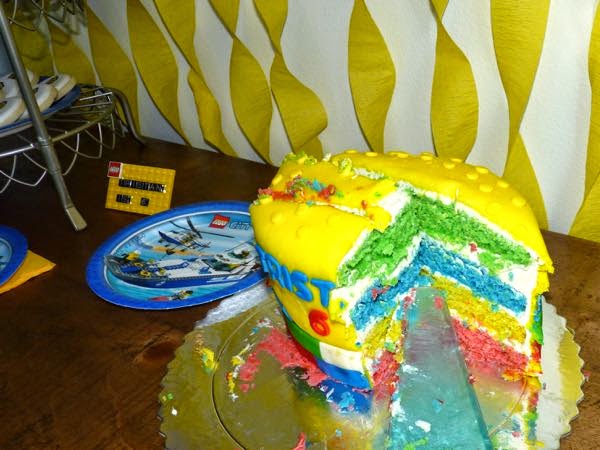 For the party favors, I had a few ideas. I didn't want to give out minifigures because that would have been too predictable. I actually planned to buy everyone Lego Movie t-shirts but that was a fail. Then I ordered Lego books for everyone but it arrived one day late :( Doh. Another fail. However, I don't think they missed out on anything and I think the kids had enough stuff and enough fun at the party anyway. We ended up giving out Lego brick and Lego minfigure candies of all colors. Some of the candies had chocolate rice cereal inside. We also gave each person a silicone Lego mold so they could make their own candy or whatever in the future. Plus a big colored Lego sugar cookie. Enough food, you think? 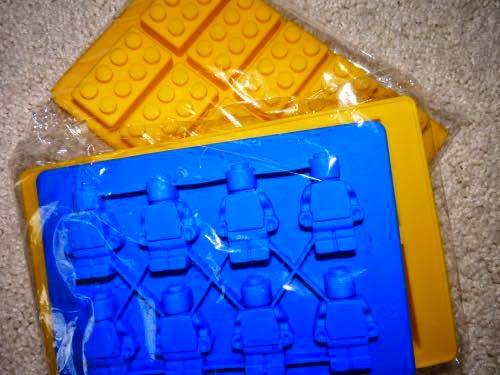 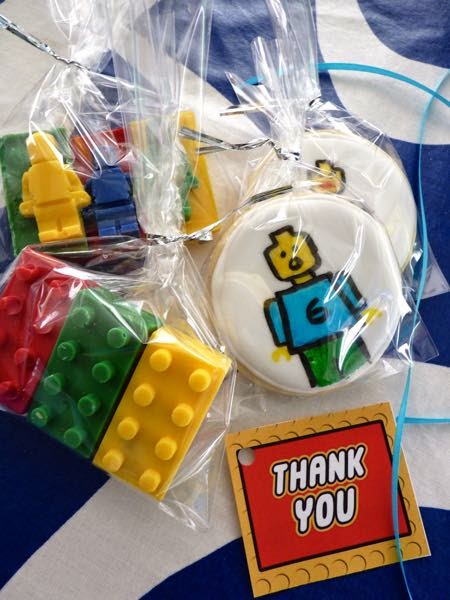 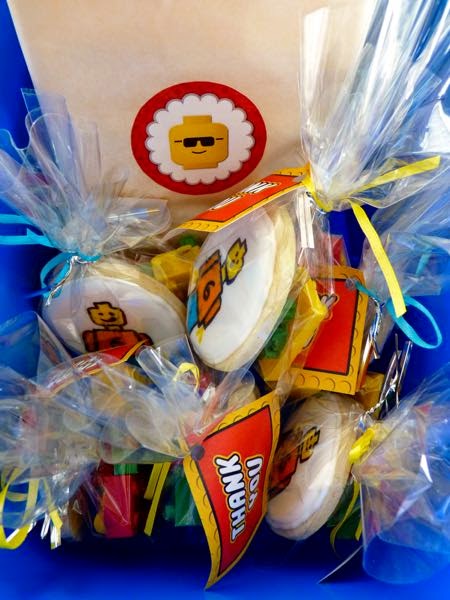 Phew! We're so relieved to have survived another epic party. Thanks to the fact that I can do everything myself and I'm so good at bargain shopping (ha ha:), I estimate the cost of our party to be around $115. That includes the party favors as well. Plus we had so much leftover food I didn't even have to cook for a few days! It took two weeks of planning here and there to put this party together. Most of the work was done two days before the party. The night before the party I was up until 1AM finishing off the cake, making the last colored Lego candy using the molds and even cutting my husband's hair. All these things that had to be done before the party day!

My parents came over from Victoria for the party and helped a bit the morning of the party, which was a nice treat for me.  Now that they are gone, I finally have time to recover and organize my thoughts about it :) Overall, I'm happy with how it turned out and I think it was well received. The kids seemed happy too so pretty much everything was awesome! :)
Labels: birthday cake cupcake dessert fondant loot bag nutella sugar cookies theme cake vanilla