Like I mentioned in my last post, one of the room parents LOVED the idea of doing rice krispie treats that looked like pumpkin pie. I admit I was a bit disappointed I couldn't do Frankenstein marshmallow pops for the kids at school but at the same time, I knew these rice krispie treats would be so much easier to make. This was a breeze since I had already made watermelon themed rice krispie treats for my daughter's 1st birthday party. Same thing except for color and flavor.

I had to double my rice krispies recipe since I had to make enough for 30+ people. The pumpkin pie portion of the treat was tinted orange and I added a couple of teaspoons of pumpkin pie spice. No actual pumpkin in there. I didn't want any wetness and I didn't think the taste of pumpkin puree would come through anyway if I only added a bit. Instead of topping the slices with actual whipping cream, I piped on firm royal icing. This way I was able to make these the day before and have them all ready in a tin container. 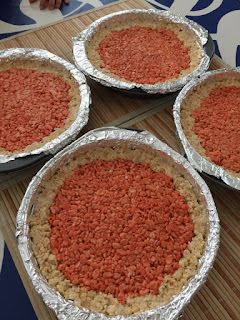 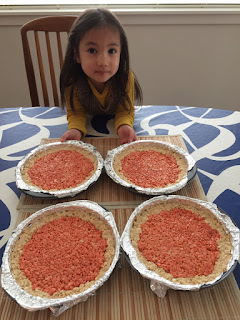 I used four 8-inch round pans and got ten slices out of each pan for a total of 40 slices. I was going to slice them into eights, but decided they were too large. Along with these treats, the kids were expected to have four other items to snack on. Plus, that also meant that we could taste and keep some for ourselves. Lol. 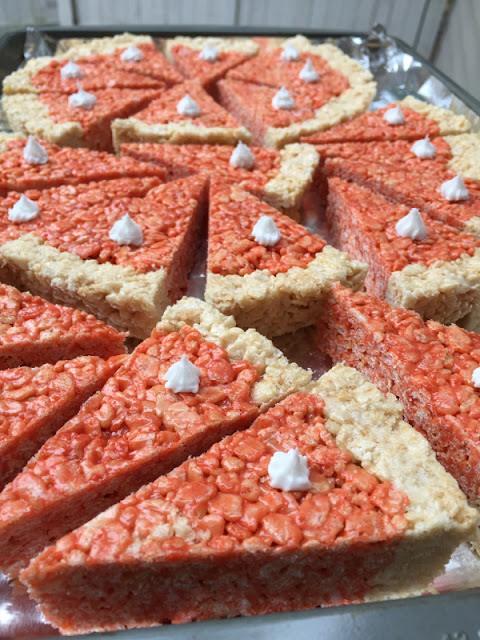 The pumpkin pie rice krispie slices looked festive and I'm quite happy with how they turned out. They tasted as great as they looked too! You could smell and taste some of the pumpkin spice in them but just a tad, which was what I was going for.

The kids at the party snatched them up. One was disappointed when the last one was taken but I told him there was another layer underneath. Haha. 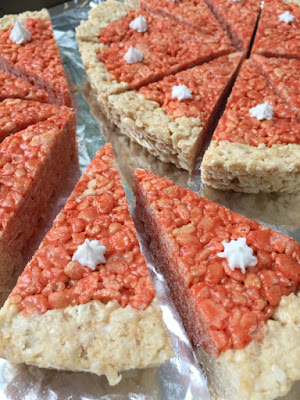