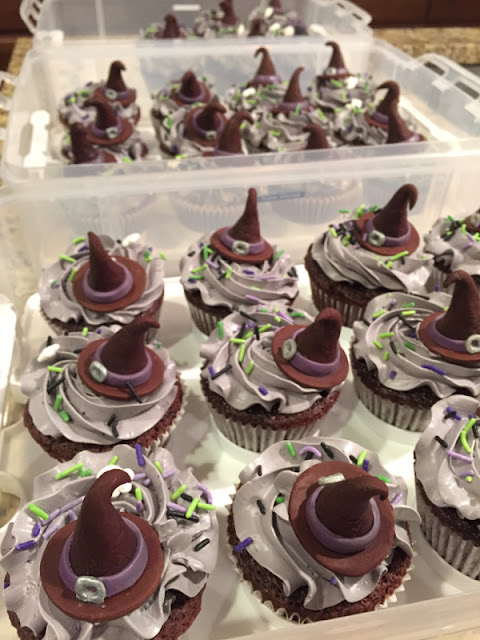 I made myself molding chocolate for the first time ever out of chocolate and corn syrup and it worked so well. They were so delicious too thanks to my Lindt chocolates:) So much tastier than fondant but sadly it's not really something you can use to cover cakes with. There isn't enough stretch in them like fondant. Molding chocolates work great for cupcake toppers and little embellishments though. But molding chocolates weren't my first choice. I would have totally used my dark chocolate satin ice fondant for the witch hats but I noticed mine had expired too long ago:( Too bad because that stuff tastes really good too. So I really have to thank my expired dark fondant for pushing me to make my own molding chocolate. Lol. 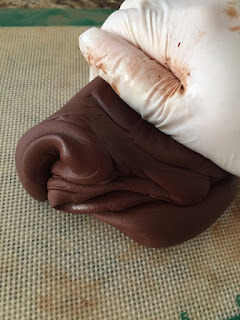 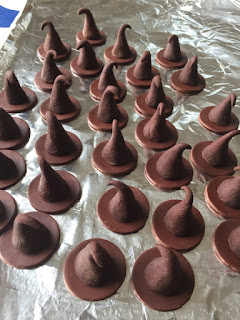 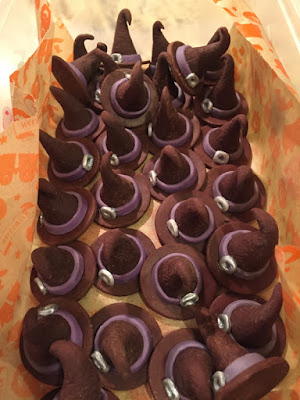 I started shaping parts of my witch hats a week in advance and kept them in the fridge. A day or two before I made my cupcakes, I attached my witch hats using melted chocolate. Then I rolled and cut out rims and buckles for my hat. Oh my gosh. That part took forever. Everything was so tiny and I didn't have square cutters that small. I started doing them manually but they turned out inconsistent and ugly and took way too long! So I decided to use a tiny circle cutter and then another tiny circle cutter using a size 4 round piping tip to create a tiny donut. From there, I just had to shape them into square edges using the side of my butter knife. Totally worked. Things started to move much faster at that point. Phew! And I only had to make 30 of them. Ha! After the buckles were on, I painted them with edible silver metallic food coloring. You're probably wondering why the hell did I go through so much trouble making the buckle square. I could have just left them round, right? Well, I looked at a lot of witch hat images online and the buckle is square! Plus, they look much better square:) Yes, it's worth the trouble.

Making the actual cupcakes and frosting was a breeze compared to the little individual witch hats. I still can't believe I spent that much time obsessing over and perfecting those cupcakes. Thank goodness they turned out fabulous in the end. I went with a dark and purple theme for the hats. I was going to do bright orange but since my rice krispies were already orange, I wanted to go with a different color. Now that I think about it, purple was the best color for a halloween witch hat :) Starbucks actually had a witch's brew frappuccino and it was purple and black. 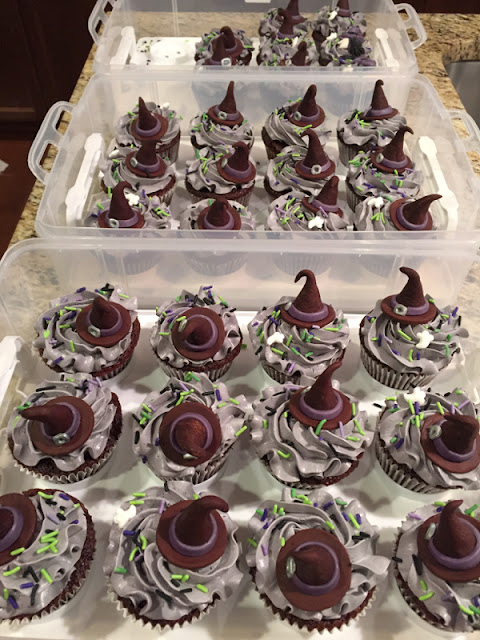 I was told at the party that the cupcakes were a hit. One of the students asked if they could take another cupcake for her sister and I said yeah! I'm so glad people love them as much as I did. Well, maybe not as much but they liked them a lot. Lol.