Recently this week, I pulled off another impossible "mommy must please and will do anything to do so" mission. I don't know what to call it but I'm crazy and once again, nothing can stop me when I decide to do something. I seriously thought I was going to pass out or vomit at the end of the night. Well, maybe not that bad but I was definitely questioning my judgement and capability there.

The kids finally went back to school last week after a couple of strange weeks where a lot of snow happened and school was canceled and then mid-winter break took place. There was barely any school and barely anything to do since we were sort of snowed in. My kids were driving me a bit nuts at home. And I was still sick with a cold and seemed to have gotten worst from all the snow shovelling. Running nose, coughing, medications etc. Ugh.

One of those missed school days was the school's Valentine's day party. That's never happened before. So what now? I was ready to keep the craft I prepared for the next school year. Everything I had planned to bake for the party was thrown in the freezer. I thought maybe the kids could have a different kind of party later in the year to make up for the party they lost on Valentines. I mean it doesn't really make sense to celebrate Valentine's when it's over, right? Nope.

So on the day the kids returned to school, the teachers told them they would have their Valentines party the VERY NEXT DAY. To be fair, the teachers did ask the Room Parents first to make sure it was okay. And of course, I said yes. Why do I always do that?! I was already so tired and sick. I hadn't been getting much sleep lately and I just felt awful. It felt more like jet lag with a runny nose. I was ready to lie down for a little snooze with my daughter. Then I checked my email.


For several hours after that, it was party planning madness! With less than 24 hours notice, I knew I had to go on hyperdrive and get everything done. I brought out my frozen lemon sugar cookie dough to thaw. Thank goodness I had dough! Then went back in my office to print and cut out more things for the class' craft. Then back in the kitchen, with my face mask on, to roll like 100 cookies. I had small and medium sized hearts. I had to make fondant from marshmallows, then molding chocolate from candy melts. Then there was more rolling, more stamping, glueing, painting etc. I didn't take a single break to pee or drink for hours and it was just dumb. I skipped dinner to continue to work on the cookies because I wanted to go straight to bed afterwards. My kids had to fend for themselves that night. Luckily, my 10 year took the initiative to make his own salad and share it with his sister. All I wanted was sleep. I even made my husband help a bit. He helped clean up my cookie making mess, helped dab the cookies with paper towels and he cut out the holes in the mason jars that I printed out. I needed to regain my energy for the next day so I went straight to bed around 9:30PM. But of course I didn't fall asleep until 1AM or so. I actually just laid in bed most of the night awake but I'm sure I dozed off at some points. Weird, right? Insomnia sucks. 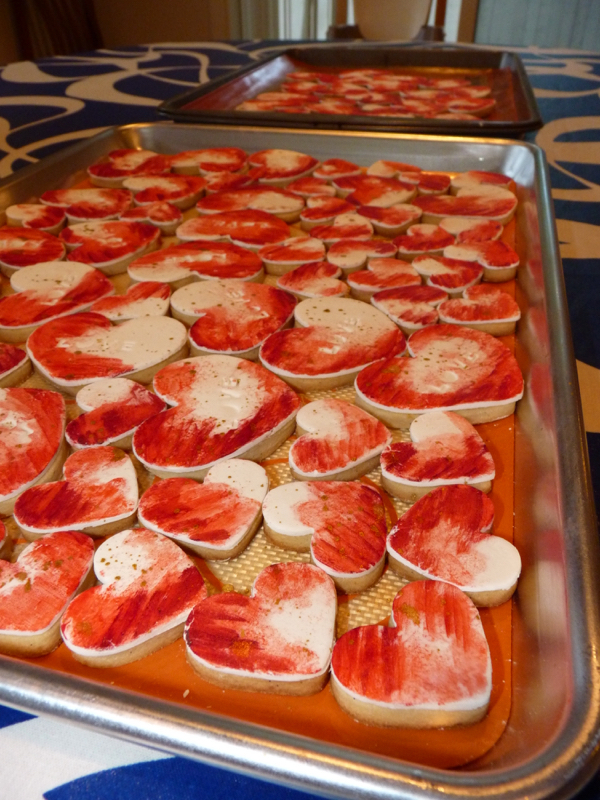 So the cookies were done and considering how they were rushed, I'm surprised they turned out as well as they did. I never tasted them at the time due to nausea but everyone said they were delicious. At least! They were my favorite lemon vanilla bean sugar cookies. I combined half fondant with half molding chocolate and used that to cover the cookies. I stamped the larger cookies with the letters "love." I painted the cookies with red food coloring, strawberry extract and water. They smelled so good! Then I finished them off by splattering them with gold food coloring. They turned into little pieces of art:)

I had planned on making these for the party for awhile but when school was canceled, I decided to just make a few anyway for Valentine's at home. That's when I found out that the very large heart was too big. There were 30 kids in the class so I wasn't sure there would have been enough dough. 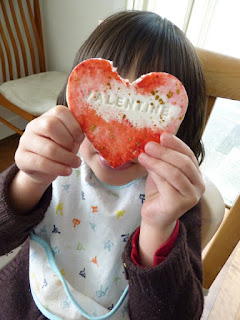 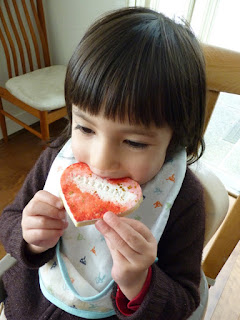 So I survived the cookie marathon but the next day I had to do my little savoury pies. Good thing the party was after lunch so I had time to do those. To be continued.
Labels: fondant lemon molding chocolate school strawberry sugar cookies Valentines