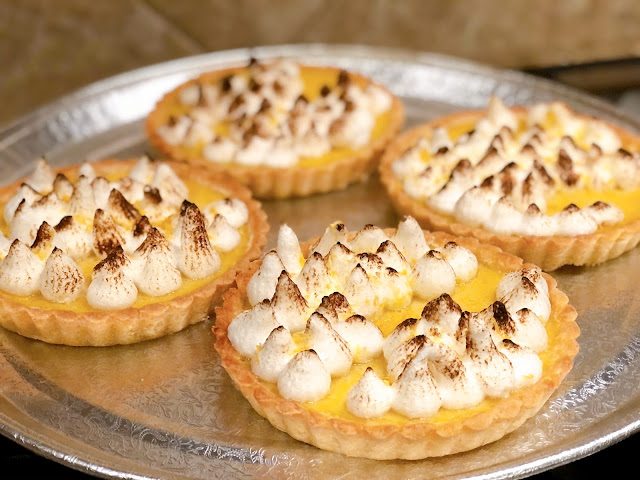 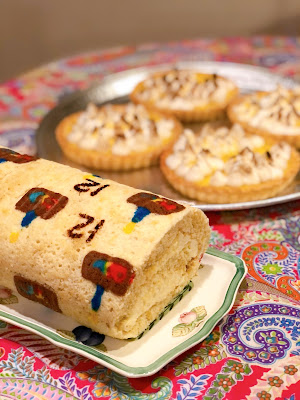 Normally, November is a busy month for me. We would have a birthday party or host a get together for my son's birthday and then there's Thanksgiving right after that. Then Black Friday shopping right after that, which is something I wait all year for. But with the pandemic, it wasn't as big a deal. We didn't even put up birthday decorations. We still had our Halloween decorations up. Lol. In the end, it was still a lot of work for me.

Just like my daughter's 5th birthday, I wanted it to be a week long celebration for my son's birthday by cooking all his favorite foods and meals. He's 12 now and more sophisticated so instead of cake, he requested for tarte au citron (or lemon tart), just like in the patisseries in France. Instead of one large tart, he wanted smaller individual ones and the meringues on top needed to be torched. In other words, this dessert had to be exactly how he pictured it from France or the big boy would be disappointed. No pressure.

I've never made tarte au citron like that before but I wasn't worried. I knew the tarte au citron wasn't going to take as much time as a cake so I decided to make him a roll cake as well. It's something I have always wanted to try and I wanted us to have a variety of desserts. It was a birthday after all and we cannot have just one dessert. Can we?? That's never happened before. 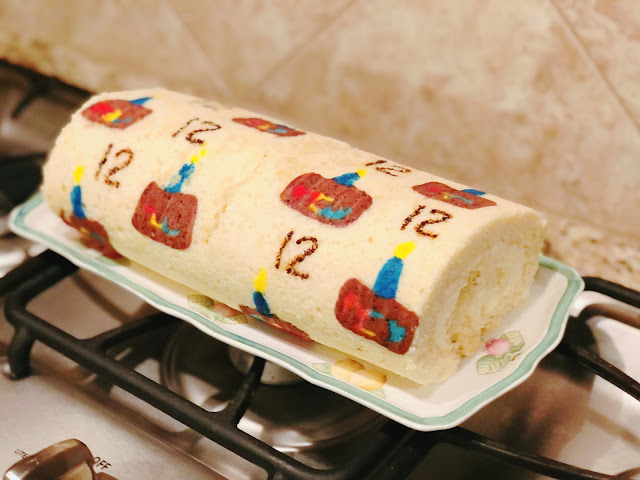 My son loves lemon. For the roll cake, I decided to keep things lemony as well. I made the cake using a lemon chiffon cake and lemon cream cheese buttercream frosting. I tinted a little bit of the cake batter and piped designs resembling cakes onto the cake pan. I baked this for 15 seconds to set it a bit before pouring the rest of the cake batter over top. It baked perfectly and when rolled, you could see the designs on the outside. Once everything was done, I food painted a few number 12s in between the cake designs on the outside of the roll. It looked pretty cool! It did crack a bit so next time I will use a bigger sheet pan and the cake might roll better if it wasn't so thick. And my frosting can be spread out more and look thinner when it's rolled up. It definitely had potential. Overall, I was happy with my first attempt at a roll cake. Even though its appearance was flawed, it tasted great. Chiffon cakes are so light and airy and not so sweet so I love them. 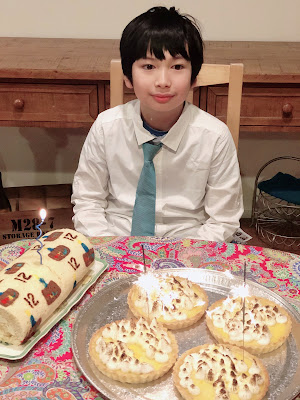 I have a 12 year old now and next year I will have a teenager. That's totally nuts. His taste buds are getting more sophisticated but he's still very much a kid. He still like mac and cheese, grilled cheese sandwiches, and ham and cheese sliders. Plus, he has a long way to go before he is independent. His room is a mess, he skips showers, he's lazy when it comes to chores and he just wants to play online games all the time. Sadly, he is less and less interested in playing legos and is bored of playing with his 5 year old sister. He is responsible when it comes to school though so I can't ask for too much.