Cupcakes for Sale at a Garage Sale 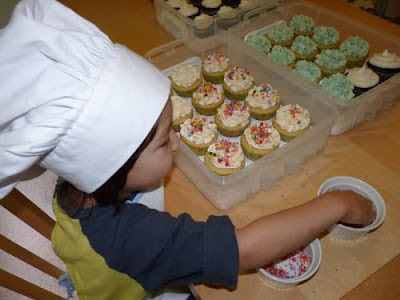 Have you ever sold home baked goods or food at a garage sale? I heard of people doing it and having a lot of success so I thought I would try as well. Cupcakes seem to be a big attraction, as well as lemonade. If you could provide both, that would be even better!

This past weekend, I had a garage sale. My table was one of many tables and parking stalls at a community garage sale held at a shopping center near my home. The host was Save-On Foods, a popular local supermarket in the Vancouver area. Not only was this my first ever garage sale but it was also the first time I was going to sell home baked goods for myself. The only times I have sold home baked goods in the past were for fundraising. I donated bakes such as brownies, peanut butter rice krispies, carrot cake, and apricot bars to non-profit organizations to raise money for their programs. It's funny because back then I wasn't even interested in baking much. I was present each time to help sell the goods as well. In fact, I organized a successful bake sale for an AIDS organization when I was living in Paris, which raised over 362 Euros in the one day. Clearly, people love sweets and baked goods :)

For my first garage sale this weekend, I made cupcakes. Lemonade seemed like too much work since it would have had to be kept cool and we didn't have a big jug. If people were really thirsty, they could have just grabbed a drink at Save-On Foods or the nearby Starbucks. My master plan was to use pretty cupcakes to lure people to our table and have them buy other things we were also selling. In particular, we wanted to attract the parents with the babies and small children since we were selling baby things like shoes, books, and toys. It just seemed like a brilliant idea. Right? 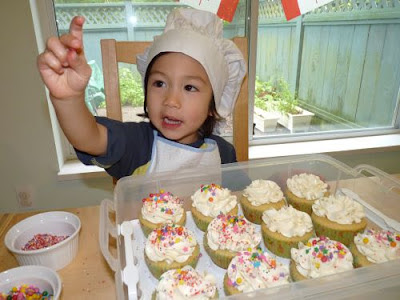 After taking a poll on Twitter, I decided to make both vanilla and chocolate cupcakes. I wanted to go with a basic kind to minimize work for myself and also to avoid allergy problems with nuts. Initially I was only going to make vanilla cupcakes but my Twitter friends ended up convincing me to make both. If you offer both, people might be tempted to get one of each. Interesting :) It also turns out that some people really like one over the other. My family prefers chocolate for sure! Some people are allergic to chocolate and I have friends who don't like the taste of chocolate cake at all. We actually encountered one or two people who only wanted the vanilla cupcakes. They said they didn't like chocolate. Another raved about the swiss meringue buttercream I used on the vanilla cupcakes and only wanted that. However in the end, the chocolate cupcakes sold better than the vanilla cupcakes.


I took another Twitter poll and decided to price the cupcakes at $1.50. Initially I wanted to price the cupcakes at $1 since I didn't think anyone at a garage sale would want to spend anything more than that. I wanted to make the cupcakes as cheaply as I could using (God forbid) cheap margarine and cheap eggs. However, when it came time to making them I couldn't find anything cheap and ended up just using my good butter, good eggs, and the good chocolate I bought from my recent France trip. *big swallow* $1.50 then!!! I made sure I advertised "real butter" and "French chocolate" on the signs. If this was a baker's market or a bake sale for fundraising, I think the cupcakes could sell for $2.50 or even $3 each. If I was a shopper, I would have thought $1.50 was a complete bargain myself. I'm frugal too! 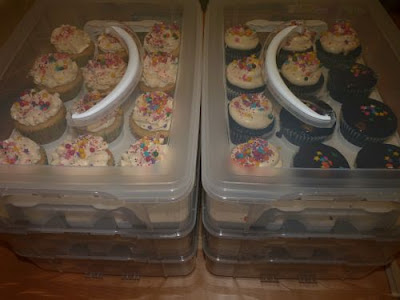 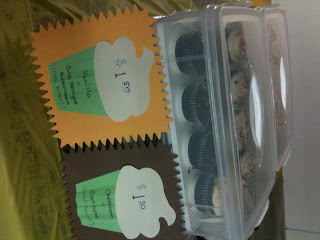 How did we do at the garage sale? Due to a few unfortunate circumstances, which were out of our control, we didn't do very well :( For instance the lack of organization resulted in very few people coming by at the community garage sale. However, the cupcakes sales did make up more than 50% of our profit. I can now confirm that making cupcakes and selling them at a garage sale is in fact a brilliant idea :)
Labels: cupcake dessert sprinkles