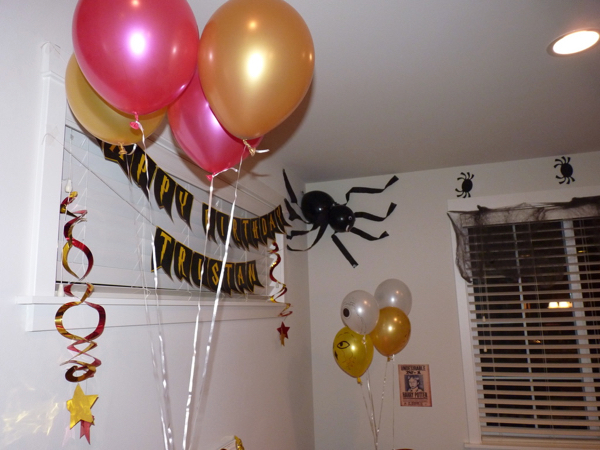 Now that I have had some time to recover, I'm ready to start sharing all the craziness that went into preparing for and hosting our Harry Potter themed-party. My parents were in town for the party and then stayed an extra week with us so I'm sort of recovering from that as well. Lol.

Like I mentioned in one of my earlier Harry Potter Halloween post, there are tons of ideas online for a Harry Potter party. Plus, there are tons of books and movies to draw ideas from. It's just insane so I basically picked my favorites and went with those. I've only watched a few of the movies and I never read the books but I did do a lot of research for the party. And I'm good at research. Hehe. My son is the only one that read all the books so he was my party consultant :)

I started planning this party on and off for two weeks. If my parties look like work, it's because they are! These things don't get put together like magic, although it sure does look that way. I have to plan early too because the craft store, Michaels, is sort of out of the way and I would prefer my husband to drive me there to shop and that can only happen on the weekends. 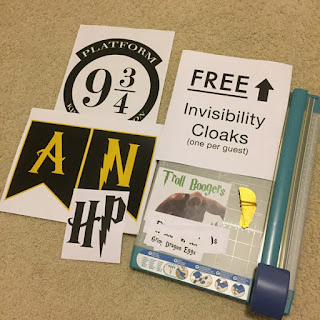 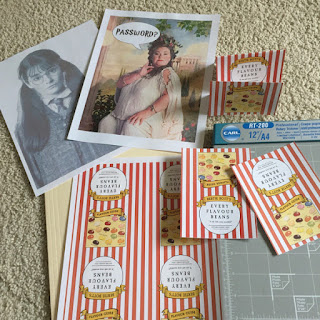 My local party store didn't have a lot of Harry Potter dinnerware and I just didn't like the wizard party stuff they had. I was told that Harry Potter discontinued their party stuff years ago. I guess around the time the last movie came out. My son was too young to have a Harry Potter party then but he's a total nerd now that he's 9 years old. I ended up buying napkins with the four house banner logos on it but the rest of the decorations were sort of home made. Well, I bought the red brick wall plastic cover too for Platform 9 3/4 but I'm hoping to reuse that for Christmas decorations. The plastic cover was HUGE so we cut it into three pieces and then only used two pieces for the party. It was plenty. I think the red brick wall was the best decoration piece we had. It was so nice, we picked that as the backdrop for our big family photo at the end of the day as well :) 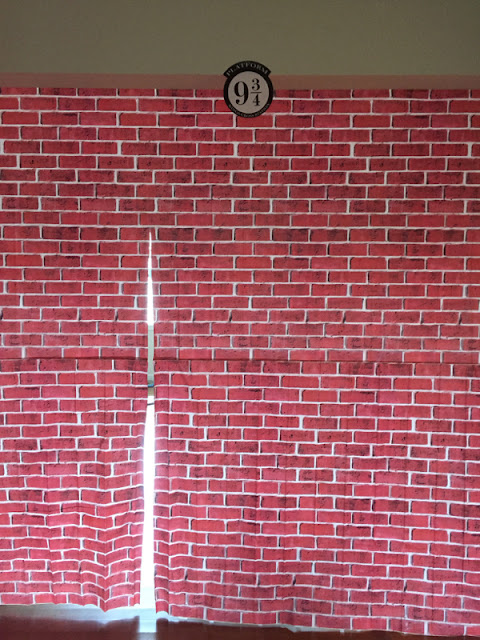 Each guest was greeted with the "password" lady at the front door. Then they would step in, take off their coats and shoes and then go through the red brick wall to get to the party area. We had the Harry Potter soundtrack streaming all day long in the house. All the music is available via Amazon Prime Music so that was awesome! 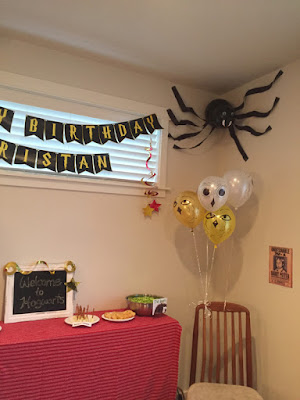 I picked balloons that could be colors of owls like white, gold and gray, filled them with helium, and then got my family to draw owl faces on them with a black sharpie. They did a really good job actually. I took the string of each floating balloon and attached a wand to the end so that they would sit lower to the ground. The wands were homemade and were gifts for each of the kids. We bunched all the owl balloons in a corner to greet the kids when they arrived. I made all the wands different and had my son assign each one to his friends. They looked so cool in the corner but we have no picture of it! It was as though the owls were delivering wands to each kid. I'm bummed that no one at the party took a picture of that. It was so rush rush that I shouldn't be surprised either.

For the rest of the signs, posters, and banner, I photoshopped what I could and we just printed it off. I was able to find everything online and so I just had to make minor modifications. It's for personal use after all :) Thank you Internet! So. Much. Good. Stuff. As payment, I'm going to document all my work here so that others like me can grab ideas or copy from it. And I want to make my Bertie Bott's every flavor beans label a free downloadable for you to use for your own party! :) 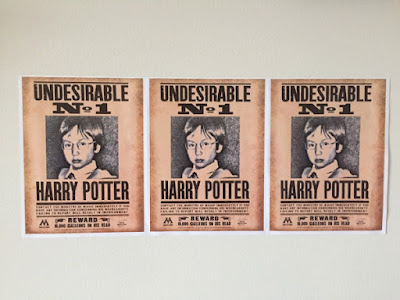 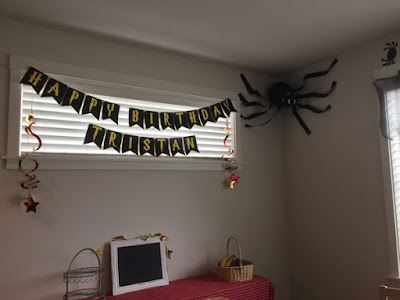 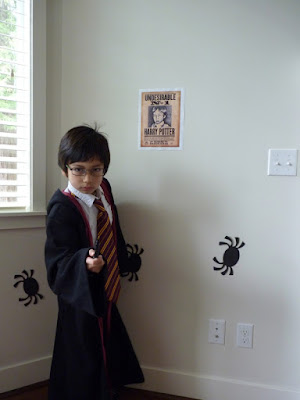 We had so much food. Some carried a Harry Potter theme and some were there just to feed us. My family came down from Canada too and with the kids, there were a lot of people to feed. There were a few things I missed at the party because I forgot to put them out as well. I had Gringotts Gold and Dragon Eggs too but I forgot and I think I lost their labels. Oops! 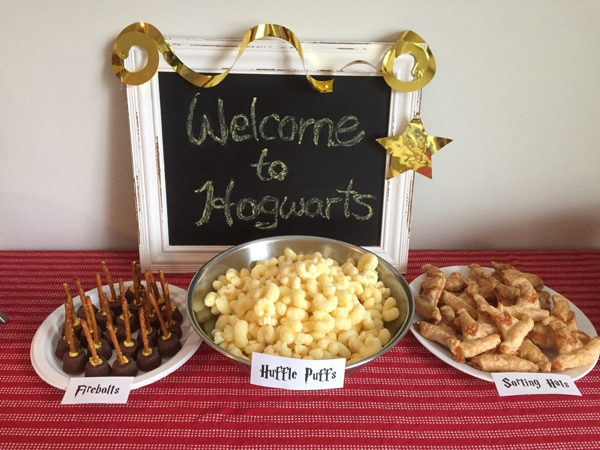 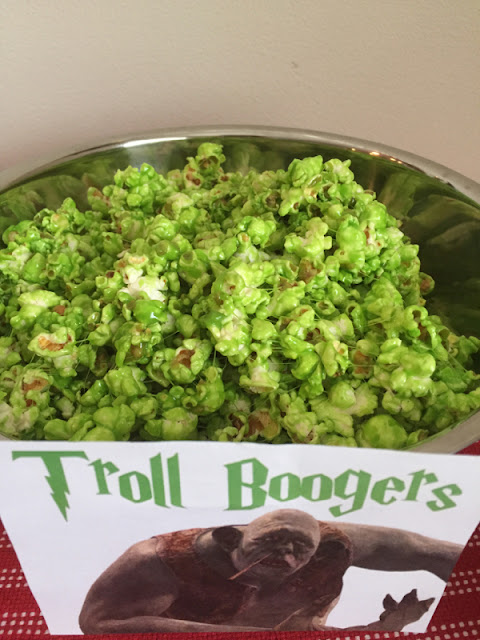 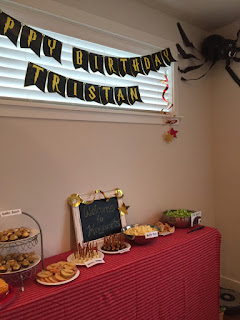 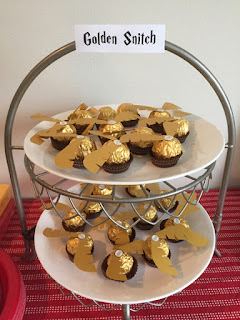 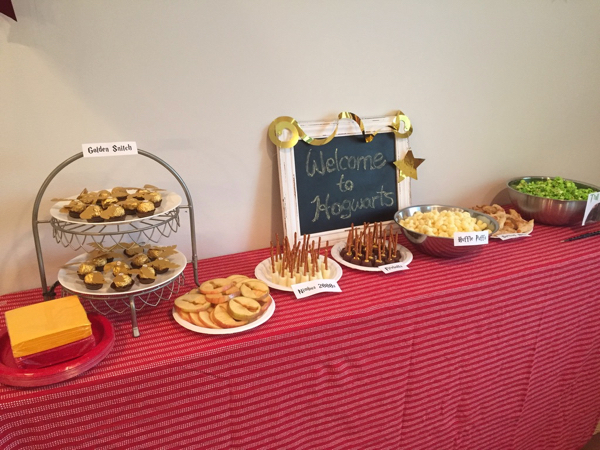 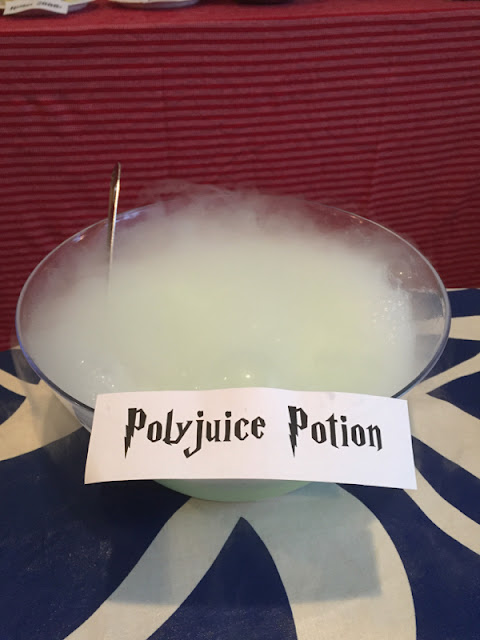 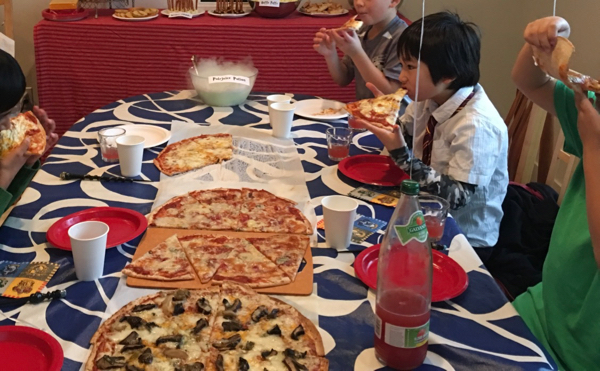 The pizzas and chicken wings were devoured. There was a huge demand for the Poly Juice Potion. The unicorn blood was popular too but my son tells me that unicorn blood is actually white so not totally accurate. Ah, who cares! I loved that the kids got into the naming of the food too :)

My two brothers and one of their girlfriend came over with my parents from Canada so I had a large party crew to help with decorations the morning of the party. Knowing that, I actually wasn't too stressed out. Thank you family! But I did have to cook a complete new meal for everyone the night before the party, on top of making cake and doing some of the food prep for the party the next day so that was a bit stressful. But after dinner, I got to relax a bit and just focus on completing my cake. 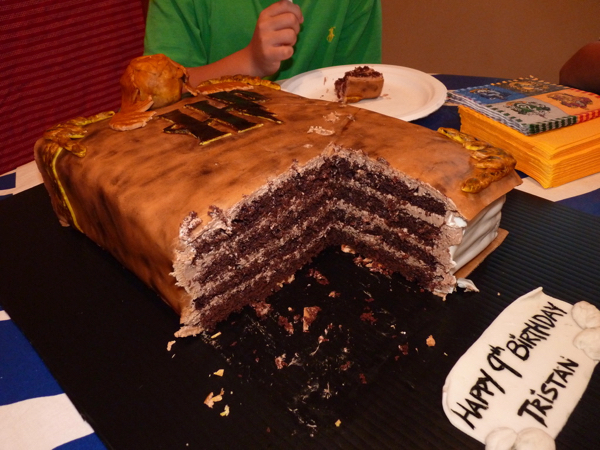 All the kids ate well so I'll call the food a success. But heck, there's no going wrong with lots of fat and carbohydrates! There were only two things that I remembered that weren't flying off the shelf though. Only a few people wanted to try the Troll Boogers because they sounded gross. My husband raved about how good they were and couldn't get enough of them. I agreed! I used extra marshmallows to make them gooey like booger too. I wanted them stringy and slimy! The apple cut outs weren't that popular too because by the time we got to eating them, they were a bit discolored. But the kids weren't into anything healthy for the party anyway. That was fine because I just wanted them to eat something. When it was cake time, everyone had some except for the one kid that I knew did not like chocolate cake. I tried to offer him just a bite but he just woudn't budge. But everyone else loved it :)
Labels: birthday chicken chocolate decoration Harry Potter pizza theme cake