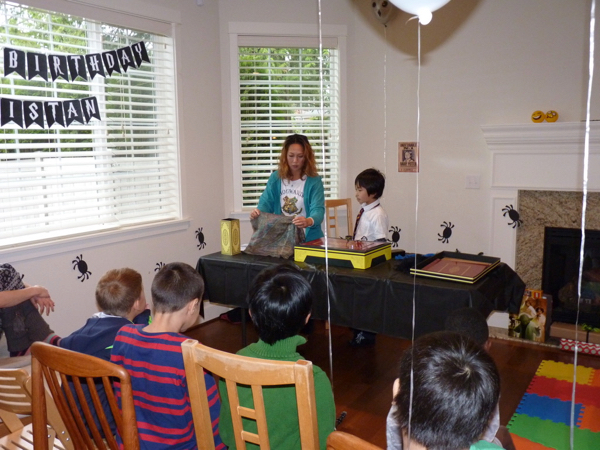 Our Harry Potter party was from 1-4PM. We had plenty of games and activities lined up for the kids in between all the eating and picture taking. In my experience, if you don't give the kids an organized activity, they create their own and that usually means they watch crap on youtube or they goof off and destroy our house. Both bad.

Not every kid at the party knew a lot about Harry Potter. Some of them watched all the movies or read all the books like my son, or a bit of both. So I wanted them to watch a bit of Harry Potter just to remind them about the wizard world. I found a good quality super trailer online composed of all 8 movies in just 20 minutes. It was perfect. After allowing everyone to arrive in the first 15 minutes, we played the super trailer.

While that was going on, I had my husband and brother prep the pizzas and chicken wings. I wanted everything cooked and ready. We could always warm things up a bit later. I took this chance to set up the table for our magic show. Yes, we indeed did magic for the party!

It was a Harry Potter party so it was the perfect time for us to do magic! It's embarrassing but we bought a magic set over 10 years ago in Vegas and never got to learning a single thing from it. Until now. Our show was actually a combination of two magic sets and some stuff I learned from watching magic tutorials online. Ha!

To tie the magic show to Harry Potter, I had my son dress up in his Harry Potter costume and assist in the acts. He would point his wand at the act and call out an appropriate spell like one to disappear, reappear, repair etc. When he didn't we took his wand and made up a spell. Whatever. It was a hack job.

It was a total family effort. I performed most of the magic tricks but I got my son and husband to do a few as well. My son was happy to learn a few things but I had to force my husband. Lol. I told him it's a bit of a pain to learn all this in such a short time and under stress but it's good because it's actually forcing us to finally crack open our magic sets and do it. I would say we're somewhere between magicians and a bunch of guys who can perform a few tricks. 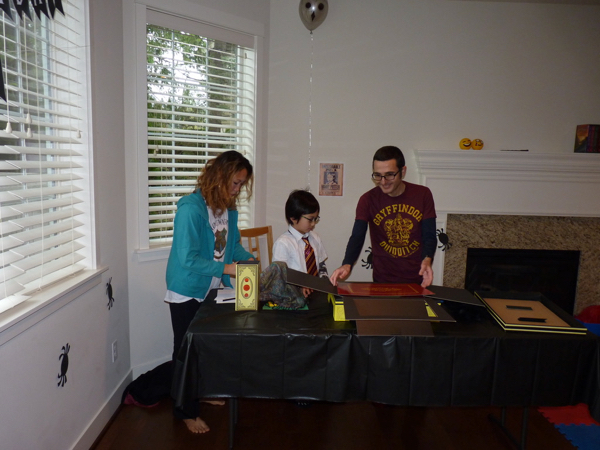 We practiced magic for the very first time and we did it on and off for about one week. In the end, we weren't ready for it but had to do it anyway. Lol. We messed up on a few tricks and in doing so gave away some of the secrets. Whoops! We had a few laughs and we had a few wows. Some of the kids would be like "I know how you did that!" or "you have an extendable wand!" (which was not true but I kept quiet). The kids kept wanting to stand and inch closer so I had to repeatedly tell them to step back and sit down.

I think a magic show for 5 year olds would have been met with more applause and awe than for our crowd of 8 and 9 year old nerds. Overall, I think it was entertaining for everyone and best of all, it took up about 40 minutes of the party. And that was with skipping a few of our acts in our performance schedule too. Because of the magic show, this party was definitely the most time consuming party we have ever prepared for. 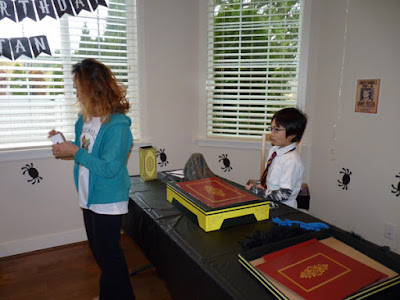 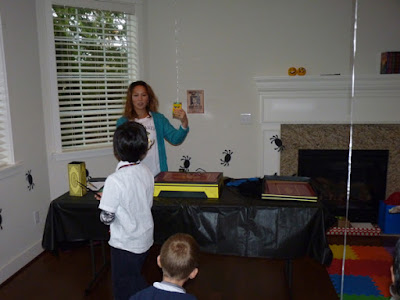 I wanted to spend a bit of time teaching the kids one of the tricks too but since the show was so long, I decided we had to move along. Lunch was ready!

One of my son's friend, who was coming to the party, requested a wizard battle at our party. It was an interesting idea and it involved wands, not swords, so there wouldn't be any direct contact so I went with it. I got my son to come up with five spells we could teach everyone at the party and we had them use and act them out during the battle. We came up with funny ones that would make the other person dance, laugh, shake with electricity and just blast and block. We typed this out (in the LUMOS font) and even included the print out in their loot bag as souvenirs. Also part of their loot was a homemade wand and they each got to use their own wand for the wizard battle. The battle was a blast but the house got super loud. You could tell they had a lot of fun! This activity lasted about 15 to 20 minutes, including a review of the spells. 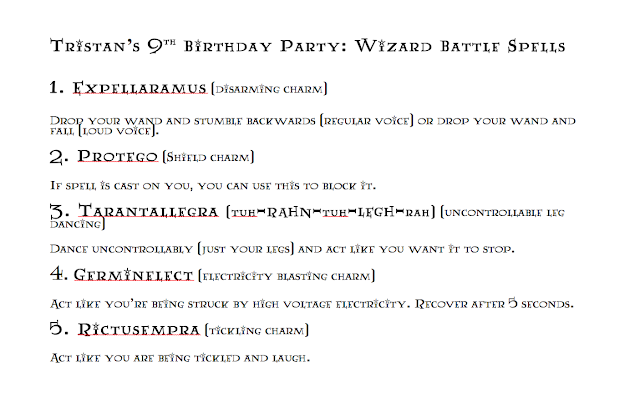 I gave each kid a balloon and asked them to blow it up. Only half of the kids were able to do this. Lol. My son actually only started blowing balloons when he was 7 years old. And then I believe my son was the only one able to tie up his blown up balloon. I helped one of the boys blow their first balloon ever so that was exciting.

Once we all had balloons, I lined them up in a straight line and we had a friendly balloon race. Using their wand and calling out the spell, "Wingardium Leviosa," each kid had to balance and juggle their balloon across the room and back a few times without it falling to the ground. It was chaotic but fun. This activity lasted around 15 minutes.

That's it! At this point I had to help clear the lunch table, although my family had done most of the work already so I had to set up the cake area. The kids just wanted to take a break from everything and sit on the couch and watch more Harry Potter trailers. There were plenty on the recommended feed from the previous one they watched so that was fine. It gave us about 5-10 minutes of quiet time to set up dessert. 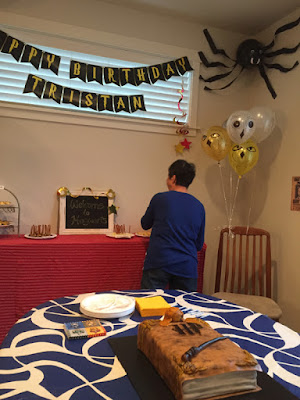 All the activities were a success and time just flew by. I'm so thankful that my family pitched in to help. I basically only had to supervise and give them directions on what to do and they were able to take over while I led all the kid's activities. We had a backup activity as well in case things went south. Lol. We were somewhat prepared to throw in a game of Taboo. Harry Potter themed Taboo but it wasn't necessary at all. Phew! :)
Labels: birthday Harry Potter