Dining in Florence and Tuscany

Antipasti, pasta (every type, color, and shape), wood oven pizza, gelato, olives, and Chianti wine. These are just some of the foods you will find in Tuscany. I got to experience the food there while on a family vacation for a week. We stayed in a farmhouse in the countryside close to Florence. We dined out wherever our road trips took us in around Tuscany and I got the chance to cook a couple of times at the farmhouse as well. It was great!

I noted down a few restaurants to visit from my vacation planning but we also went into random restaurants and coffee shops as well. We had to go to random places when the restaurants we visited on my list were closed for lunch or were too far to walk to. Every day we would make it home before dark for a light dinner. Our farmhouse had a nice outside patio to dine in and most days were hot and sunny during the day and warm in the evenings. Spring weather in Tuscany was much like summer weather in Vancouver. 23-29 Celsius every day with sun and clouds.

Italian food is a bit like French food, except it's also common to have pasta as an appetizer and then another different pasta for the main dish. There are salads but the most interesting and probably best starter to the meal is antipasti consisting of ham, and things such as olives, marinated artichokes, roasted color peppers, and I've seen side salad in some as well. The region is known for their hams so a plate of assorted hams is a must try dish. I know just one kind of prosciutto but in Tuscany there are different varieties of prosciutto. In fact they are quite heavy on the meat and cheese dishes in general so vegans be warned!


When you order a meat dish in France you normally receive something else with it like rice or vegetables. The meat portion is usually quite small. In Tuscany, you just get the meat. It's very fresh and tasty meat though:) I found myself stuffing myself with bread just to eat the meat with something. Tuscan bread is good and big, but nothing too special. The breads in general are just not nearly as great as breads found in France. When we shopped at the grocery store, my Mother-in-law refused to buy the fresh bread. I guess you can say we are all somewhat bread snobs:)

Pizzas in Tuscany are awesome. Every place cooks it in a wood fired oven. In Vancouver, you need to specifically look for advertised wood oven pizzas but in Tuscany, they just call it a pizzeria. Even the cheap frozen pizzas at the grocery stores are wood oven and taste good. Pizzas in France are similar too but some are cooked in conventional ovens.


Pasta was both interesting and delicious. I think they use various specialty flours to make them and I wish I had the space in our suitcases to buy some cool pasta flour to bring home:( I was surprised to discover that traditional lasagna did not contain any meat. It was basically fresh lasagna noodles with a blended creamy tomato-like sauce in between. It was so good!


We drank wine with every meal. We often requested for Chianti or other local wine. Chianti Classico is a popular one. You can buy some for as cheap as 3 Euros in grocery stores or some that are more than ten times more expensive.


Dessert was often just gelato. I read that Florence has some of the best gelato in Italy. My favorite flavor is pistachio. We were experiencing summery weather so some days we were having gelato more than once. Omg. My 3 year son was in ice cream paradise :) 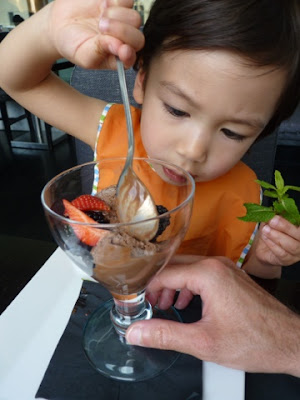 A few months ago, I tried ricotta cannoli for the first time at an Italian bakery in Vancouver. It was so good! I had to try some in Italy. I also couldn't resist trying a couple of other nice sweets I saw in a bakery:) The cannoli I bought in Florence were delicious too. 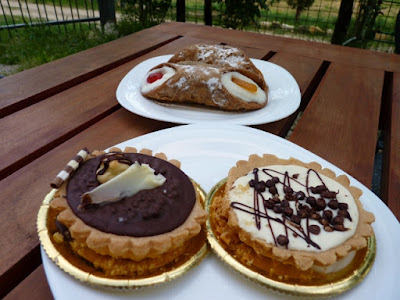 We were in Tuscany for 7 nights and we pretty much ate the above Italian foods every day. As delicious as it was, I am so sick of eating the same thing! Well it wasn't the exact same thing but you know what I mean :)
Labels: dining out Italian pasta pizza travel