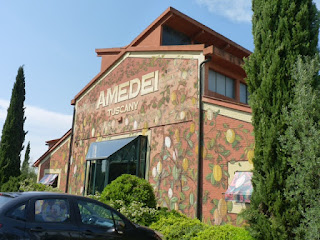 I first heard about Amedei chocolates at the chocolate tasting at Xoxolat in Vancouver about a month ago. Our host showed the class a bar of Amedei chocolate called the "9" (or maybe it was the Chuao?) and told us that this $20 bar of chocolate is also known as the best chocolate in the world. $20 for just 50 grams! Depending on the year of competition, different Amedei bars won the Gold award. In 2011, it was the "9." Our host at Xoxolat also said not to buy it since the average chocolate lover would not appreciate the greatness in such a fine bar of chocolate. At that price, I wouldn't have dared anyway! When she mentioned Amedei was Italian and that its factory was in Tuscany, I was thrilled! I had plans to visit Tuscany soon :)

On the day we had plans to visit Pisa, we also visited the Amedei chocolate factory. It was located very close to La Rotta in Pontedera, about 30 minutes east of Pisa. We made it there in a much longer time since we got lost again and we were navigating based on just highway signs and general direction. We had no GPS:( What a nightmare. We even tried activating our very expensive 3G just for directions but it wouldn't pick up any signal where we were. I think we all deserve medals for making it there the way we did. Amedei is not very well known to the general public and we didn't see any signs on the street for it until we got down to the narrow countryside road. When we arrived, the gates were all closed and we thought they were not even opened. It was 4PM and I had no appointment. I heard it wasn't a tourist destination so I didn't think I needed an appointment. There were cars in the parking lot so I went up to the gate and buzzed the intercom. I asked if we could go inside and visit the factory and the lady that answered told me we normally needed an appointment. Oh dear:( Shortly after, she buzzed the gate open for us. Hooray! 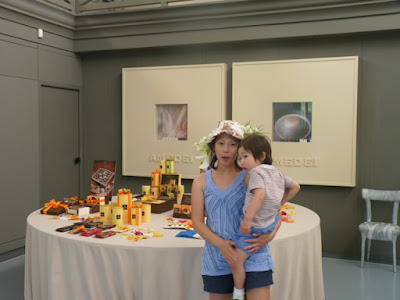 After a bit of inquiring about and waiting, we got our chocolate tour :) We had the 1 1/2 hour tour for 50 Euros a person. It was too late for the 2 1/2 hour tour, which would have included a trip to the production area. If I was by myself, I would have loved to have done the production tour since it was 120 Euros a person. The rest of my family wouldn't have appreciated that tour. We were told the factory does not sell chocolate to the public but if we did a tour, we could buy chocolates afterwards. However if you live in Europe, you could order directly from Amedei and they will ship it out to you. I'm not sure if the prices will be the same though. When I asked about buying online, our host said that they may open up online shopping on their site in the future.


I for one was happy to tour Amedei with such short notice. They were so gracious to fit us in at the last minute! Our host led us to what looked like a fancy board room with displays of chocolate. We watched slides as she presented and explained how they made chocolate at Amedei. Then in between slides, she showed us cocoa fruit, cocoa seeds, and we got to try chocolate. We tried lots of chocolate! My 3 year son sure ate well :) Lol. We started out eating roasted cocoa seeds and my 3 year old liked them. Our host was impressed by him :) I thought they were excellent too! They were so fragrant and weren't bitter like what you would have expected. The seeds were from Venezuela and then later we tried some from Madagascar. These two locations grow some of the best cocoa trees in the world. 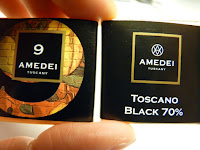 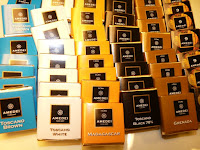 The tour was good and the chocolate tasting was delicious. After the tour was over, we received a nicely designed pamphlet describing the chocolate creation process at Amedei and a little gift from their factory. We were told that we are now ambassadors of Amedei :) 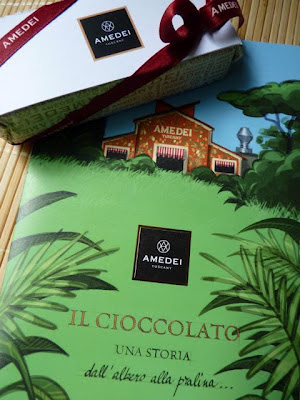 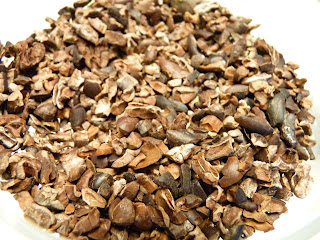 - Taken from the Amedei booklet

Amedei only uses the best cocoa in the world. They own their plantations and know everything there is to know about the cocoa they use. This sets them apart from most other chocolate producers in the world. Their plantation workers are very well compensated to ensure that only the best quality seeds are sent to Amedei. There is a lot of quality control by Cecilia herself. Cecilia is the Italian lady behind all the chocolate making. There are no shortcuts and individual chocolates are decorated by hand and wrapping is all done manually as well by the 25 factory workers at Amedei. They use German roasting machines that are over 100 years old. Other chocolate makers think Amedei is a bit too "manual" for the 21st century. Maybe but it looks like all their hard work has paid off since they are kicking butt at chocolate competitions :) 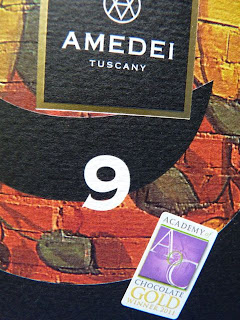 Amedei chocolates are not well known and are also hard to find. There is only one importer in Canada for it and they are located in Ontario. A small shop like Xoxolat must get their chocolates from these guys. The "9" won the best chocolate in the world in 2009 and 2011 but the Amedei chocolate "Toscano Black 63%" and "Toscano Black 70%" won awards too. In previous years, "Chuao" and "Porcelana" won Gold awards. "Porcelana" is known as the most expensive chocolate in the world. Only 20 000 are produced each year and each bar is numbered. I loved the "9" bar because it was sweet and delicious, not only because I knew it won the best bar award :) It is a 75% cocoa bar but it tastes a bit sweeter than their Toscano Black 70% bar. My husband and I also liked the Grenada and Madagascar bars. Amedei dark chocolates are rich in cocoa but they taste extremely creamy. 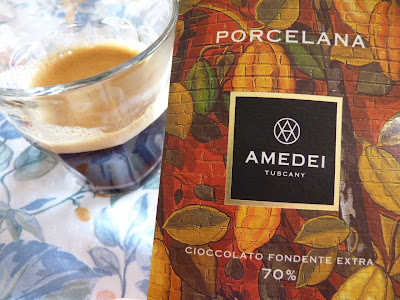 If you are ever in Florence and are fortunate enough to come across Amedei chocolates, buy some! I believe they sell Amedei chocolates for around the same price as their factory in around Tuscany. We bought the "9" bar for 6.70 Euros at the factory. Compare this to $20 a bar in Vancouver Canada. Wow. I bought a few kilograms of Amedei chocolates and hauled that all back to Canada. I may be an amateur foodie but I still appreciate and want the best. Sorry Xoxolat - I didn't listen! I'm smiling ear to ear knowing that I have in my possession the best chocolates in the world :)