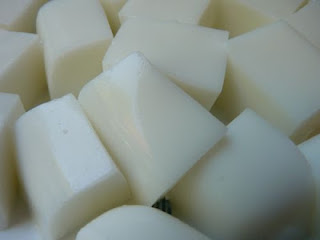 Haupia is probably my favorite simple dessert to make. If you love coconut, you will most likely love haupia too. The first time I had haupia was when I was living in Hawaii as a co-op student in 1998. It was so good I could have just eaten that for my meal. When my roommate, who was also a local, told me what it was I almost immediately went out to buy a cookbook and started looking for coconut to make haupia.

It's funny because they probably served it here in Vancouver as part of dim sum too but I just never ordered it. When I finally knew what it was and ordered it here later, it just didn't taste like the awesome haupia I had in Hawaii.

I just couldn't believe haupia was so simple to make. In Hawaii, you could purchase frozen coconut milk and use that. The result was fabulous! When I came back to Canada, I couldn't find frozen coconut milk so I tried with canned coconut milk. One greasy disaster. Yuck! I also tried with frozen grated coconut and it still wasn't great :( When I ran out of options, I considered grating a real coconut and making my own milk. Yeah right! If I had done that, my favorite simple dessert would have turned into a time consuming complicated dessert so it was a good thing I was lazy! I just couldn't reproduce the silky smooth texture of Hawaiian haupia without frozen coconut milk. Yes, it had to be frozen and yes, it had to be just milk! Then one day, I came across frozen coconut milk at a T&T Supermarket. Omg. I think I may have taken a picture of it on the shelf. I totally stocked up! I was so happy :) They don't always carry it either but recently, I came across another nearby small supermarket that carries the frozen milk too. Yes!

Whenever I need a quick dessert, I whip this up. You could even whip it up right before you sit down for your meal. By the time you are ready for dessert, it will be cold enough from the fridge to cut up and serve :) Not only is it delicious and simple to make, but it will also only cost you about $1.50 to make. Under $2 for sure! Enjoy :) 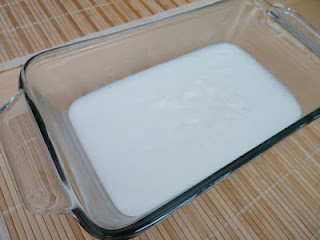 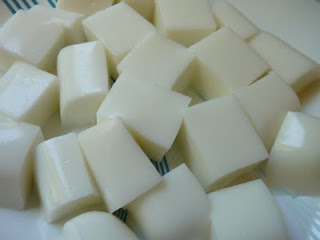 Defrost the coconut milk the night before, if you can. If not, you will need to quickly melt it over the stove top and watch over all the mixing a lot more carefully.

Combine coconut milk, sugar, and cornstarch in a pot and stir to mix well. Place over the stove top at medium heat and whisk until it has thickened. Don't cheat or else you will get clumps in the haupia! It will probably only take 1-2 minute from the moment it starts to thicken. Pour into a glass loaf pan and let it cool. Place in the fridge. Cut into cubes before serving.
Labels: coconut dessert vegan