I bought a new plate!

Well, it's just one plate but it's white. All white :) I bought it to take photographs of food. I guess I could have bought two or three but we actually have too many dishes at home as is. Everything we own has some kind of pattern on it and it's not really the kind of pattern that compliments food either. At least it hasn't so far. But now I own one white plate! Yay :)

Our home has really poor lighting so I was quite excited to get an all-white plate. Here is the first food picture I took on it: 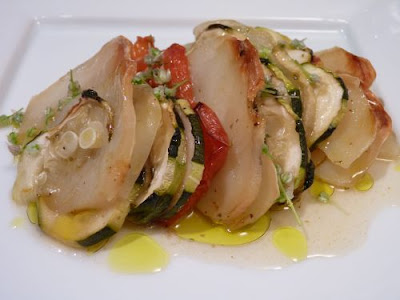 I'm impressed at how much brighter and clean the dish looks! Like many of my food pictures, it was taken in the evening just before dinner time. Sadly at that time the sun is already on its descent and we have to turn the lights on inside our house. I hear that using the flash is a total taboo in the food photography world so I stopped using it. As a comparison though, I did take it with this dish after moving it to an even dimmer area. What do you think? I think the one without the flash is better but the one with the flash isn't so bad either.


Now to the important stuff. The dish I made above! One Saturday morning at the Burnaby farmer's market, we came across these really cool looking flowers at one of our favorite organic vegetable stands. The vendor told us they were edible leek flowers. Edible? I was even more intrigued :) She ripped off a few petals and told us to try them. They tasted a bit spicy, kind of like garlic. Or raw leeks I suppose. Lol. She said you could throw them in salads and eat them. They were really pretty and I was sure they would make any dish prettier too. These organic leek flowers were selling for $0.50 each. I bought three. I felt pretty just carrying them around :)


The leek flowers had very long stems so I couldn't really store them in the fridge. Instead, I put them in a vase on our dining table. They actually looked really pretty in the vase. Darn. I should have bought more just for the decoration. I didn't think I needed more than three for cooking. It turns out they last quite a long time as flowers. They dried up a bit but I had them in the vase for at least two weeks. Every time I needed some leek flowers for salads or cooking, I would just pick from the bottom of them and rinse them a bit with water. As far as cooking went, one leek flower would have been plenty. They were really big flowers!

The day I bought those leek flowers, I was already playing around with the idea of using them with my ratatouille. Since my 3 1/2 year old has a bit of an allergy reaction with eggplant, I don't use that in my ratatouille at all. You can basically use whatever vegetables you like but it's good to go with ones that are round and it helps if they are roughly the same size. Having said that, zucchini and eggplant are commonly found in ratatouille. 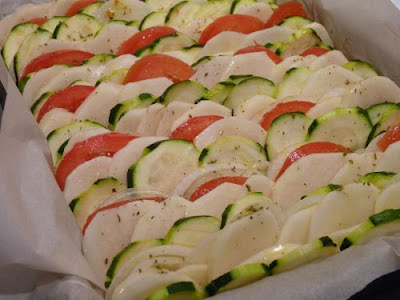 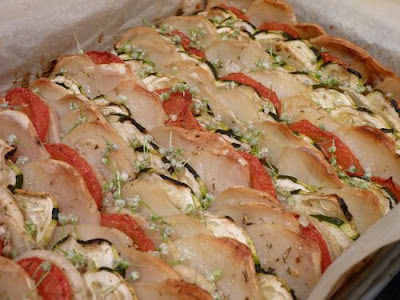 Awe :) Doesn't the ratatouille look prettier with the leek flower garnish? I must say my ratatouille has never looked this good before I became a food blogger. Lol. Now I am constantly thinking about food presentation and food styling. And I'm a complete newbie at all this! By the way, the ratatouille was delicious. Especially because I grilled the zucchinis a bit on the BBQ beforehand. It was just smoked and then I finished cooking them in the oven with all the other stuff. Bon appétit! 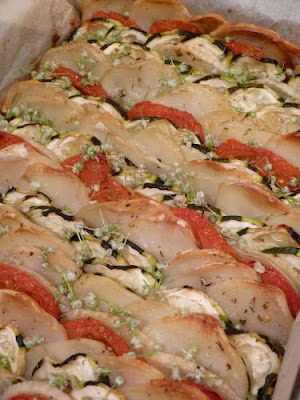 In a lasagna pan, layer them however you like. I stand them up so that I can fit more into the pan. I also layer tomatoes next to potatoes so that the liquid from the tomatoes keep the potatoes moist. It's probably not necessary but that's how I think! :)

Dissolve vegetable stock cube in the hot water. Add Provence herbs and salt to the stock. Spoon over the filled pan as evenly as possible. Drizzle olive oil over top. Reduce oven to 375 F after pan is in the oven. Bake for about 45 minutes to 1 hour. Before serving, sprinkle with leek flowers and drizzle with a bit of olive oil. 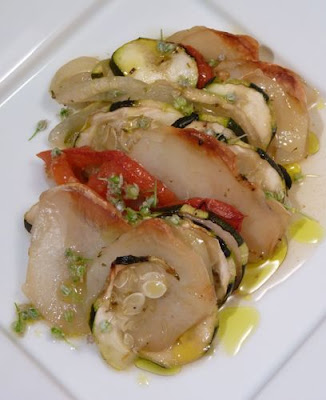