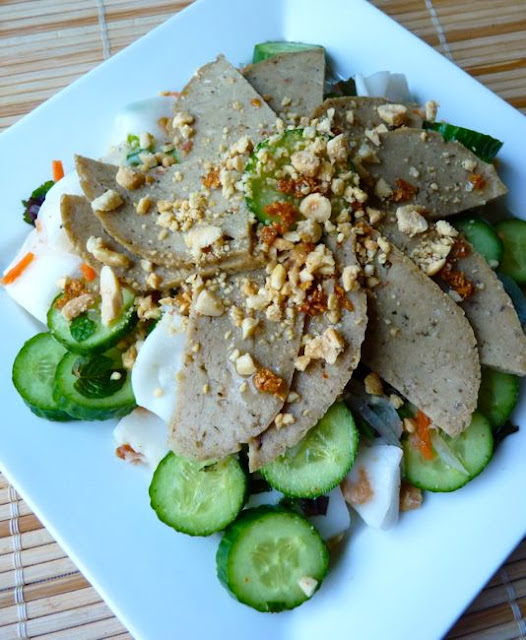 Rice roll salads are a lot like sandwiches because you don't really have to cook anything. You just need to get the right stuff and assemble it. It's definitely one of my favorite salads while growing up. My parents made it quite often at home and we would eat huge plates full. It's a lot of vegetables and light so it was easy to eat a lot of it. The most costly item in the salad is the Vietnamese deli ham. A roll of ham wrapped in banana leaf is around $5 or $6. Since we were a big family, we would all get a huge plate of mainly lettuce, bean sprouts, and other greens, some rice noodles, and a few slices of ham. Now for my small family of three, we basically eat like royalty. I have some vegetables and then I pile on the rice noodles and ham :) Every time I eat this salad, I think about how lucky and fortunate we are.


The rice roll salad I would like to share is adapted from the one my parents used to make for our family. Instead of using Vietnamese deli ham, which I absolutely love, I decided to use the vegan turkey deli that my husband made. The vegan deli meat doesn't make this dish vegan since the dressing is a fish sauce. The rice roll I used also had shrimp and green onions in them. If you are cool with seafood and still want to avoid meat, then this salad is something you could try. My husband is actually more of a Pescetarianism than a strict vegan. He doesn't want to eat animal flesh or animal products like dairy and eggs but he will seafood and honey without complaints.

Now, I still much prefer the real thing but the turkey deli we used still made the dish pretty good. In fact, I thought the homemade turkey deli meat was quite good and it had potential. My husband loved this Vietnamese rice roll salad a lot more than I did but I think he is quite biased. But let's face it, anything with fish sauce dressing is pretty darn good :) 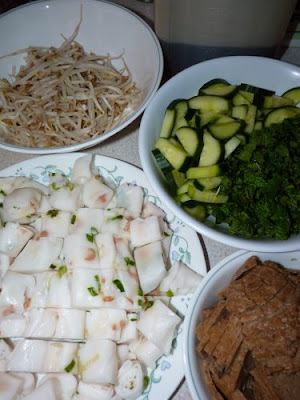 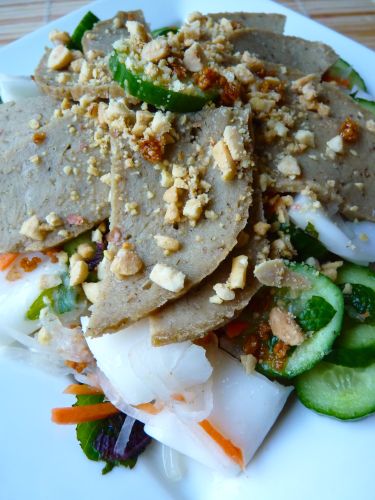 Microwave cook the bean sprouts. Microwave warm the rice roll chunks. Assemble each plate by splitting up all the ingredients, with the toppings going on last. Serve right away. 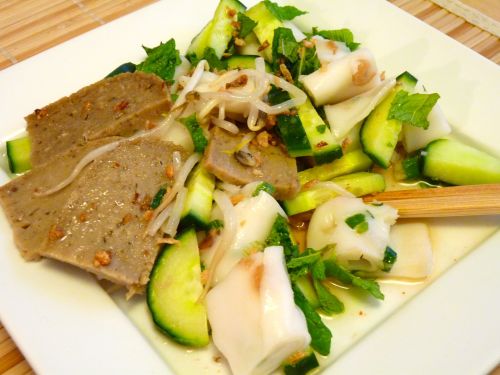