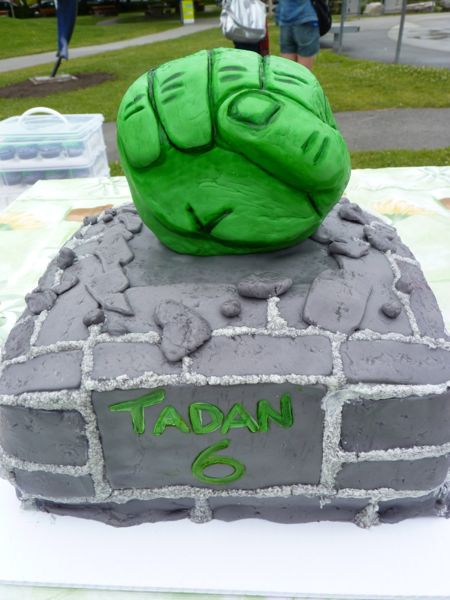 Yes, it's another Hulk cake. And it's for the same person. Haha. I know, right?! When my nephew turned five last year, I made him a Hulk cake at the request of his mom. I was told he was into the Hulk and that was his favorite Superhero. One year later, he still loves the Hulk. In fact, I think he has grown even more obsessed with the Hulk now. Seriously, I have never met a bigger Hulk fan!

Last year I was able to pull off a Hulk cake. I was scared at first since it was a hard theme to work with. You can imagine my disappointment this year when I was requested to make another Hulk birthday cake. Oh rats!! It would be super easy to make the same cake again since I had already done it once but who wants the exact same cake for two consecutive birthdays? Honestly, my nephew probably wouldn't have minded. Lol. But isn't it cake taboo to make the exact same theme cake more than once? It's got to be.

So I needed to create another Hulk themed cake but it had to be totally different from the one last year. Last year was already hard so how was I suppose to pull this off? Again? To make matters worst, I picked a hard design. Seriously, there aren't many great Hulk cake inspirations out there. I don't like about 95% of the cakes I found online. I think it's because the Hulk is just a hard one to do. Naturally, I fantasized about how amazing it could be by looking at a few jaw dropping photos online of professional Hulk cakes. I am nowhere close to that level of cake making and probably will never be. Who am I kidding?! 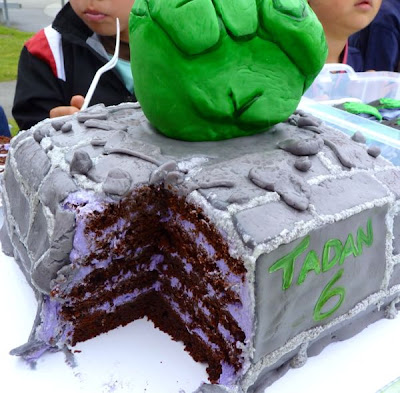 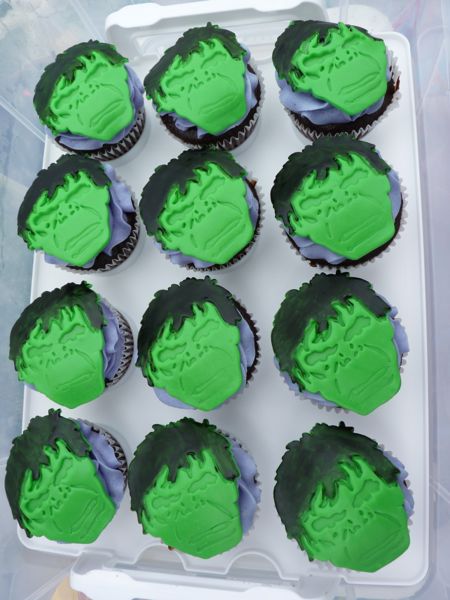 After many tiring hours with a few mess ups here and there, the final cake turned out just okay. I certainly liked last year's cake more. Lol. But it was a simpler cake. I think I should just stick to simpler cakes from now on :) For this cake, I started out with a vision of something AWESOME! Then, I settled for something "recognizable." Lol. It's a lot harder than it looks people! I had to learn a new skill to make the Hulk fist. It started out well but then it went down hill after that. The shape of the fist eventually got lost with every extra layer I had to add. Sadly, I had to make the best of it :( I also messed up on the icing after rushing to do it and had to make the best of that too. There was just no time to redo anything. Even though I spent hours on the cake and made fresh fondant, I still felt rushed. This Hulk smash cake was actually the second theme cake I made this past weekend. I have never made that much cake before in such a short period of time. I was totally caked-out! I cannot imagine making cakes for a living. Kudos to those of you who do!

This cake project was an adventure. It didn't turn out like I had imagined it but everyone seemed to like it anyway. I think I'm the most disappointed one. Now that I'm blogging about it, it's going to end up in that 95% inventory online of hulk cakes I don't like. Lol. The best part about making this cake was that I got to learn how to make an object out of rice krispies and use chocolate molding to shape it. That was neat. Hard but neat.

The cake may not look big but it was and it was really heavy! It easily fed around 30 people. And it was so hard holding it in the car! We had to transport it far in our car and I was holding it on my lap uncovered, while balancing it as my husband sped to the party. We were late. Ahem. The thing was, I was tired. It was the first time I ever stayed up late to finish off a cake. I only finished the cake though. The morning of the party, I had to finish off the cupcakes. I even got my husband to help paint the fondant Hulks while I made the frosting. That's what marriage is for, right? :) So we were late to the party. I know every caker says that transporting cakes if one of the hardest and most stressful jobs. I can totally agree. I'm so glad it got to the party in one piece!

Happy 6th Birthday to my nephew! I know he was really happy with his birthday cake :) 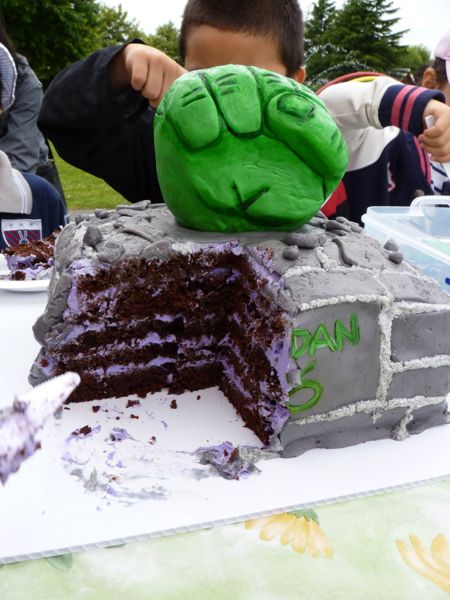