What a Foodie Eats While Vacationing in Oahu, Hawaii 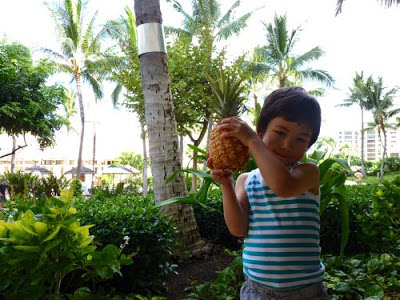 We got back from our family vacation in Oahu, Hawaii a couple of weeks ago. It has taken me this long to get out of vacation mode and actually find the energy to write about it. The three of us had such a fun and relaxing week on Oahu. We were outside a lot! We swam in the ocean and pool, played with sand at the beach, visited friends, hiked, and of course ate out and cooked :)

We stayed in Ko Olina on the west side at a lovely resort, which had a very well equipped full kitchen. We didn't know at the time since every kitchen tends to be a bit different. My husband was thrilled there was a blender so he could make his super smoothies. He brought crushed chia, flax, and hemp seeds from home hoping he could make fresh fruit smoothies. He used soy milk and tropical fruits and made smoothies every day. After a long run in the morning, he would make a smoothie to accompany his breakfast and would be happy as a clown :) As for me, I was thrilled we had a rice cooker in the kitchen! We also had plenty of Tupperware with lids, which was awesome for storing food in the fridge. In the past, we had to buy saran wrap or use paper towels to cover up food in the fridge. The dish rack was great too because we didn't always want to use the dishwasher. In fact, my husband can't stand dishwashers because they are so loud and take too long. He likes to wash dishes by hand but I think it's just a habit of his :) 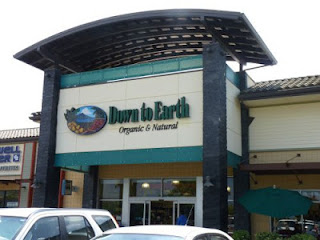 We grocery shopped at Walmart first, then Foodland for things we couldn't find at Walmart. No matter where you are in the world, Walmart always has the best deals. However, when things are expensive at Walmart, you can't help but think about the poor locals who have to shop in Hawaii all the time for every day things. I just balked at the high prices of so many things. I have forgotten how expensive it was to live in Hawaii and I know for a fact that people there make much less than people on the mainland. I know prices are all relative but we're Vancouverites and food and every day things for us is quite affordable. For instance, green onions are as much as 6 times more expensive in Hawaii. Many things are 2 to 3 times more. A few things were cheaper such as pineapple, papaya, macadamia nuts, mahi mahi, and wine. We focused on buying things that were local or that were cheaper and worked our food menu around that. When the farmer's market in our area opened on Thursday, we went there and grabbed some produce. We also visited an organic and natural food store call Down to Earth and grabbed a few vegan things there for my husband. We bought a few cold dishes for lunch to take out to the beach. At $10/lb, we didn't buy much. The tofu poke, mock chicken salad, and macaroni salad all tasted quite good but was way too pricey. I mean unless they used organic quinoa, rice, or special multi-grain pasta for their macaroni salad, which I'm sure they didn't, charging customers $10/lb is a lot for simple food.


We had breakfast at the hotel every day. We ate poi English muffins, whole wheat English muffins and bagels we brought over from Vancouver. My 4 year old likes eggs so I would fry an egg or two for us as well. I actually got to cook more on this trip than most of our past trips. Like I said, the kitchen was well equipped and we even had access to nice BBQs at the resort. Walmart, Foodland and Down to Earth were only a 10 minute drive away so it was easy to get groceries. I enjoy cooking, no matter where I am, and it's just so much easier and simpler to eat at home with a small child compared to going to a restaurant. Groceries were expensive but eating in was still much cheaper and healthier than if we dined out every day. 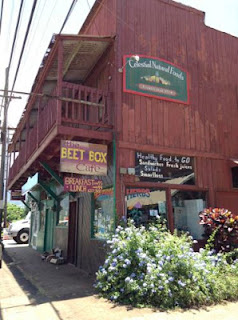 Yes, we did go out to eat a few times! As always, I researched and selected a few restaurants all over the island for us to try out. Our first stop was Beet Box Cafe in Haleiwa in the North Shore. It was a tiny vegetarian restaurant at the back of a natural food store. My husband ordered the Beirut burger (or falafel burger) and I ordered the Healthy Plate of Food. He also had the iced hibiscus mint tea. We gave our 4 year old a bit of both of our dishes. We all loved the food but I think the Beirut burger was the better dish. It was just full of unique tasty flavors and it was a good size. I make a really good falafel burger at home but this one tasted totally different, which I really liked. Why get something you can easily make yourself, right? :) The Healthy Plate of Food was nothing particularly special (i.e. I could probably mimic this at home :)) but it was nice to have the variety and we really needed to eat something healthy. This was our first real meal in the past 24 hours so it was perfect. The Beet Box Cafe was definitely a winner and affordable too.


We visited a friend of my dad's in Pearl City. In his backyard was a huge mango tree and it was mango season! He stuffed us silly with cut up deliciously ripe mango during our visit and then sent us on our way with a case of mangoes. We LOVE mangoes. We had no problem eating all of them during that week we were in Hawaii. In fact, our fruit count during one week was pretty impressive. Here was what the three of us ate just for fruits alone (I might be forgetting some): 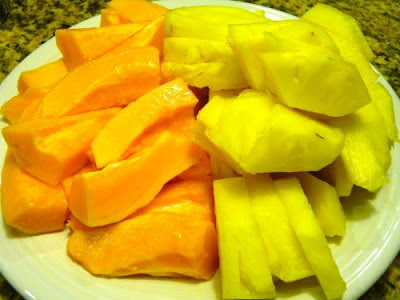 The next restaurant we tried was Side Street Inn in Honolulu. We ordered the special fried rice, the farmers salad, and the pan-fried pork chops. The fried rice was tasty but a bit too wet and sticky. Some pieces of the pork chops were a bit overcooked, dry, and chewy. It was nice that they cut it up for you and then give you the bones on the side too. Portions were big and we had to doggie bag our leftovers home. I can see why the locals liked it but since we were coming from Vancouver, we thought the food was good but not great. We are definitely spoiled with all the delicious Asian food in Vancouver. Plus, I can cook a lot of this myself. Lol.

An old friend of ours lives in Honolulu with his girlfriend. He invited us over one evening for dinner. It was nice to take a break from being tourists and enjoy some company. After the visit, we felt somewhat out of place there. Let's just say the experience sparked a few interesting conversations in the car between my husband and myself on our way back to the resort. Later in the week, they came over to our resort for a BBQ feast. Again, this experience intensified the interesting conversations my husband and I started. Lol. The truth is we enjoy each other's company but we realized even more than ever that we are just so different. They were being themselves and we were being ourselves. Nothing more, nothing less. I think this deserves a blog post of its own so I'll write more about it later. 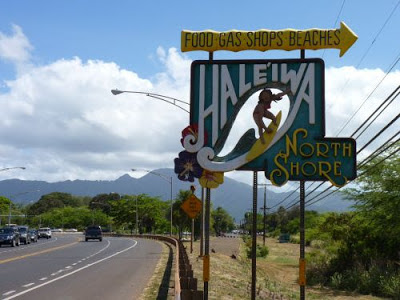 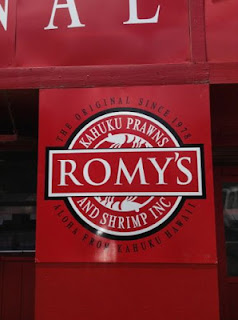 The third and final restaurant we tried was Romy's in the North Shore for shrimp. I knew nothing about this place because it wasn't on my list but we ended up here after the place we wanted to eat at was closed. Tita's Grill & Catering was closed on Sunday! I was so disappointed and I just wished I knew beforehand. In case you are wondering, they close early Saturday around 3PM and every Sunday. Unfortunately, it was our last day in Hawaii so we'll just have to try it next time. Even more disappointing was that we picked the wrong place to go for shrimp. There were a gazillion shrimp trucks in the North Shore but we ended up at Romy's since it looked big and there were shrimp farms just behind it. It was a 45 minute wait after ordering. I actually wanted to leave after I saw the prices but it was the second place we stopped at for shrimp and they all looked pretty similar. We ordered the garlic prawn plate for $14. Boy, were we disappointed:( The prawns had their heads on to make them look bigger. Some were medium, small, and maybe there was a large one in there. The garlic was over fried and tasted a bit bitter. The portion was small. We felt like we wasted our time and money. On top of that, the shrimp farms were so dirty we couldn't see a thing. Okay, that one wasn't their fault. 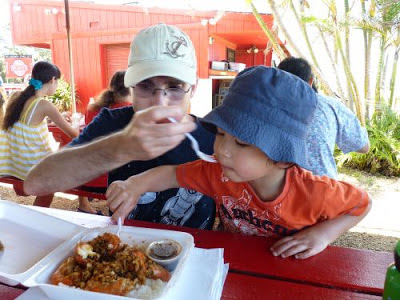 We ventured into the North Shore three separate times. Twice for meals and sightseeing and one time for shopping. We spotted the famous Matsumoto shaved ice shop while shopping in Haleiwa and we just had to try it. Every day in Hawaii is a shaved ice day! We got the Tropical and Hawaiian flavor shaved ice. The Hawaiian one had guava, lilikoi, and papaya and looked like a rainbow. I preferred the Tropical one, which had pineapple, coconut, and banana. It was $2.75 for each large cone and they were yummy. Nothing can cool you down more on a hot day :) After shaved ice and before heading back to our resort, we went to Ted's Bakery and bought a whole chocolate haupia cream pie. Yup, a whole pie! We were initially planning to get 3 slices but we figured a whole pie was cheaper at $12 a pie and was just a bit more food. Also, we were pigs. Oink, oink! :) The pie was good and it might actually be something I may want to mimic in the future. After all, I already figured out how to make delicious haupia and I have plenty of good pie crust recipes :) Stay tune people! Stay tune ;) 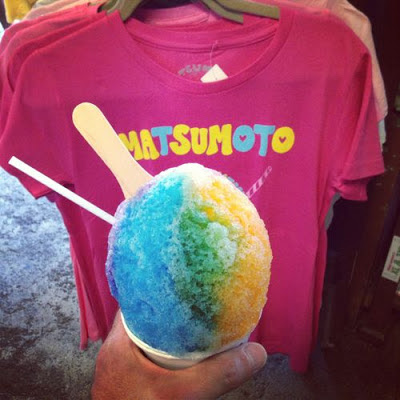 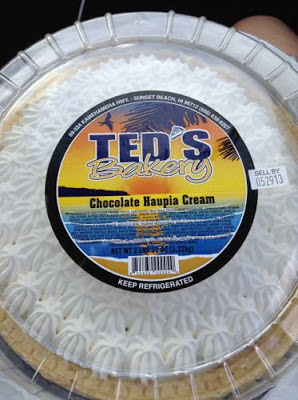 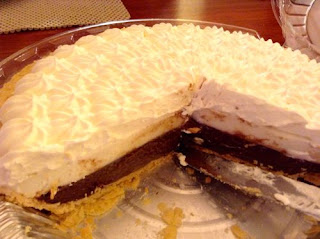