What a Foodie Eats While Camping 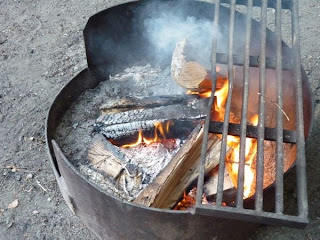 A few weeks ago, we went on a camping trip to Porpoise Bay on the Sunshine Coast. It was our first time camping with our 4 year old and our first time over on the Sunshine Coast. It was so much work preparing and planning for this camping trip that we made it a three night and four day trip. That's a lot of camping for people who don't like to camp! I mean I loved camping as a kid but back then my only responsibility was to have fun and discomfort didn't bother me nearly as much. As an adult and especially as a parent now, camping is just a heck of a lot of work. Too much work. 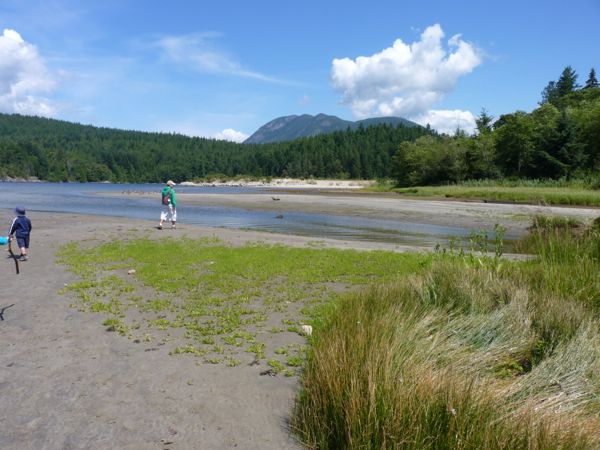 We actually had a great trip :) From Vancouver, it was just a short ferry ride over to the Sunshine Coast and then a short drive to the provincial park. Large campgrounds, hot showers, flush toilets, playing fields, and just a few minutes to walk to the picnic areas, playground, and beach. The weather was 22-23C the entire time we were there. We went with my sister and her family so our 4 year old had his little cousins to play with. We hiked, played at the beach, had a scavenger hunt, roasted marshmallows and made s'mores, and drank hot chocolate. We even watched bats fly by the field at dusk. Overall, I thought it was a good first camping experience with the kids. My husband would probably agree but then tell you that he's done with camping! Lol. He really doesn't like camping. I don't mind it and I know my 4yo loved it! 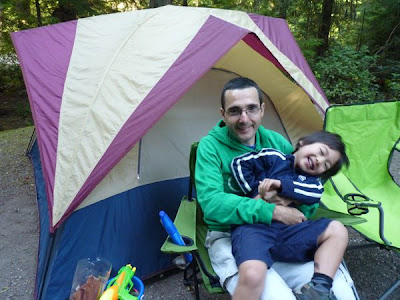 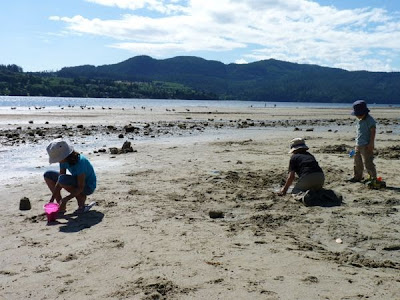 When it came to dining at the campsite, we ate like Royalty. Honestly, it was more glamping, than camping. When we first decided to go camping, I thought we could just survive on Kraft dinner, Hamburger Helper, Lipton noodle soup, Campbell soup, Quaker instant oatmeal etc. Then I realized it would mean three days of eating processed food. Um. One or two meals I'm okay with but three days worth of food?! I just couldn't do it. If I ate like that, I might actually get sick. For the past several years in particular, my body has adapted to eating more nutritious homemade foods. Okay and I'm a huge food snob too! So what? :)

A couple of days before the camping trip, I started to prepare food. I baked graham crackers and then dipped them in chocolate, I baked and sliced bread, I chopped various vegetables and put them in individual Ziploc bags, I prepared a flour mix for vegan omelets, I boiled quail eggs, I made tomato sauce, pistou soup and so on. I kind of went crazy. I even made haupia at my husband's request. I made mint chocolate truffles the night before and rolled and dipped just a dozen balls to bring to camp to try. We bought the most amazing chocolate mint at a local farm here and I just couldn't resist making truffles with them. It had to be done since I wasn't sure the mint would have survived after I returned from camp. As you can see, it was quite urgent :) 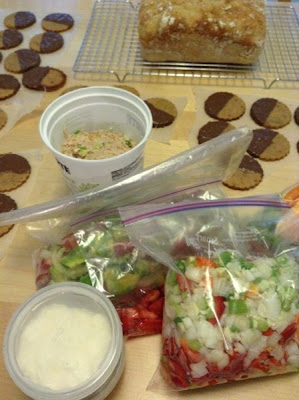 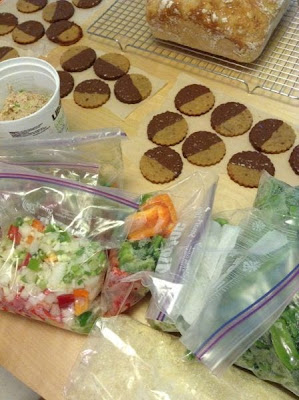 We had to come up with breakfast, lunch, and dinner for seven people for three days. My brother-in-law is a foodie too so I was coordinating with him using Google Docs. I stuck with the list but he brought extra stuff and and as a result we probably had enough food for an entire week. Lol.

Some of the dishes and food I contributed:
All the meals that I contributed were homemade from scratch and had plenty of vegetables, protein, and fiber. My sister and brother-in-law bought most of their food but it wasn't of the camping sort either. They brought mahi-mahi filets, salmon and chicken burgers, turkey sausages, smoked salmon etc. They bought a portable barbecue grill for the trip so we were able to barbecue food every day. We even barbecued our french toast and regular toast when we had eggs for breakfast. Well, we didn't have a toaster! And eating plain room temperature bread was dull. Hahaha. My sister would be like "what kind of camping is this?!" I told her it's glamorous camping or glamping! :) 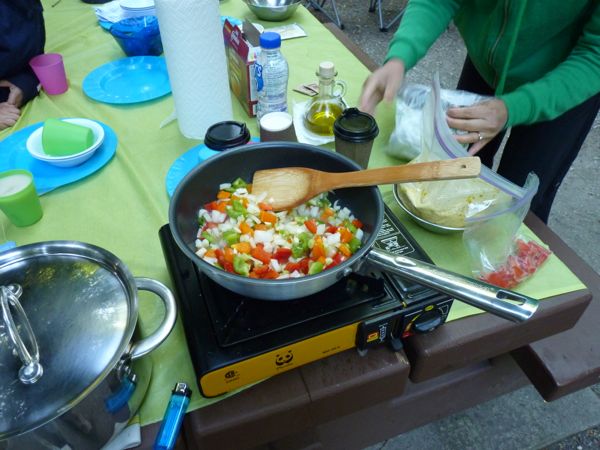 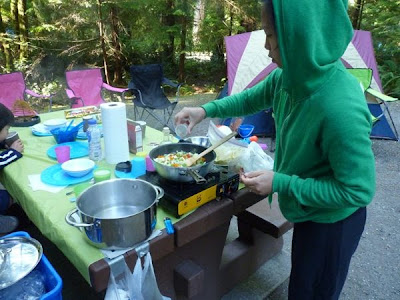 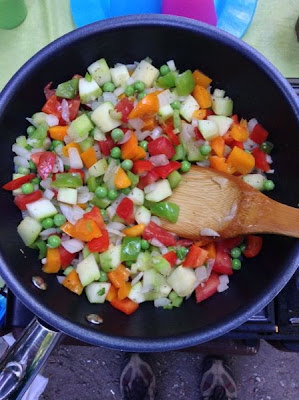 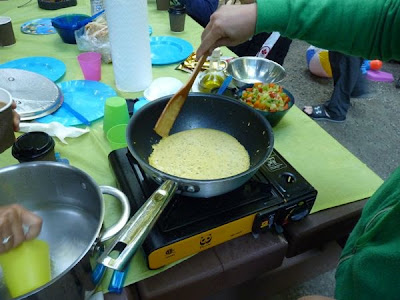 The last half of the trip we started to realize that we had way too much food left and we had to eat more so we did. Yikes! It felt like Thanksgiving. It was the same story at every meal. We were so stuffed it was actually hilarious. We would eat so much at lunch only to find ourselves having to cook again just a couple of hours later. Lol. After lunch one day, my husband and I both fell into a food coma in our camping chairs at the beach and seized to be parents for an hour or so. Our 4 year old was off playing with his 6 year old cousin and when we saw them later, they were both soaked in water and covered in sand from tip to toe. Oops. We're totally blaming the food for this!

We ate too well and we totally over did it but it was all delicious. The best camping meals I have ever had! Glamping actually made me feel sorry for the other campers. I saw a couple of girls at the water area washing their dishes with a bar of soap and a pine cone. Wow. People are so resourceful! We just brought along our dishwashing liquid and sponge from home. In fact, our car was packed to the rim. But there were seven of us and we had two tents and a lot of camping chairs. And a barbecue grill with a full tank of propane. That makes us glampers, right? 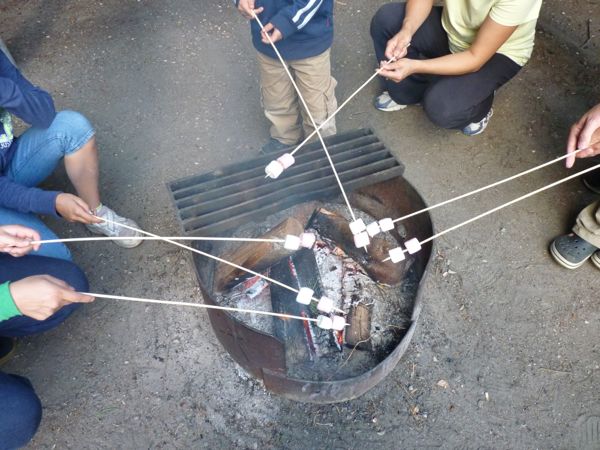 It's actually quite funny. At night when it got busy by the communal fire pit, I was actually a bit embarrassed to go there to roast marshmallows. Everyone there was roasting their white marshmallows on twigs they found nearby. Then we came along with our fancy plate full of homemade graham crackers pre-dipped in chocolate and store bought long s'more sticks with colorful marshmallows at the tip. We couldn't stop laughing afterwards. We didn't mean to show off. We just like nice things and we like eating good food.


Thanks to all the planning and organization, we didn't spend a lot of time cooking at camp. There are plenty of things that you could do beforehand to save you time and allow you to pack a good cooler. Here are some of my tips:
Do as much as you can. I didn't want to bring along cans of food so I either opened them at home or avoided those foods. I didn't want to make a mess chopping vegetables at camp so I did them at home. I pretty much devoted a day and a half on and off cooking and preparing food for packaging. It was pretty insane. But knowing me, if I had to do it over again, I would probably only do more. But that's just me! Lol. It was a delicious camping trip and it was worth all the work :) 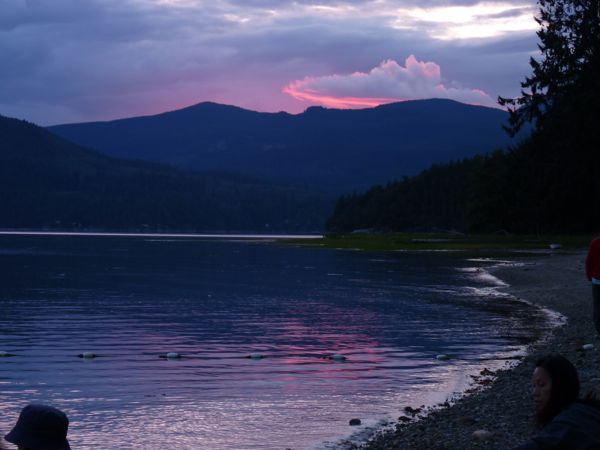