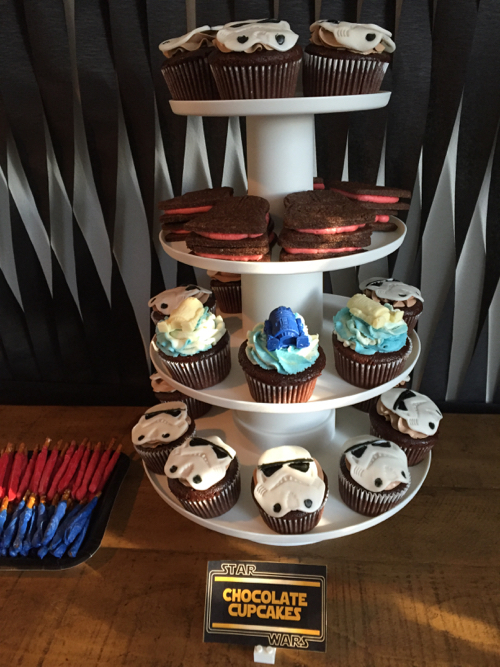 It's the year of Star Wars! Episode 7 is coming out soon and the stores are filled with Star Wars merchandise. We found all sorts of food themed in Star Wars like Kraft macaroni and cheese, fruit snacks, cereal, frozen yogurt, Campbell soup etc. Then of course there were all the toys, school supplies, lunch boxes, blankets, balls, kitchen supplies, clothing, party supplies etc. You name it, they had it! Needless to say, we had no problem finding things to decorate our home with for my son's 7th birthday party. We already owned plenty of Star Wars things like Legos, bakeware, clothes, movies, TV shows, and video games. We bought some decorations, made some of our own, and bought some food and school supplies for game prizes.

Star Wars is one of the more popular party themes out there. Kind of like Legos. Google or search for it on Pinterest and you'll find loads of ideas and inspiration. We re-created many of them and was quite pleased with the outcome. I already blogged about the food we had for lunch at the party so here, I will talk about the cake, desserts, and games.

Now that I have a 2 month old at home, I had to go extra easy on the cake this year. I already did a Star Wars cake once for my husband's 40th birthday. I wanted to do something different this time and I wanted to be able to use what I already had at home. If I had the time, I would have loved to do a death star cake. I saw this really amazing one online and read that it took 25 man hours to do. No way! I ended up choosing the simplest and coolest one out there I could find. An abstract Chewbacca cake. I made a three layer 10 inch chocolate cake with chocolate swiss meringue buttercream using about 1 1/2 times the recipe. It was fine but it didn't WOW anyone, especially me. I added more detail to it than the one that inspired me so it looked quite different. It would have looked better if I had used thicker fondant though. It didn't have that 3D effect because I was so frugal on the fondant. I actually ran out of fondant half way through and had to color more. I knew it would happen part way through so my fondant got thinner and thinner. LOL. Then I almost ran out a second time so I really had to stretch it out. I made it work but I had to optimize the coverage like crazy. Personally, I like using thin fondant because I find fondant to be too sweet. However, for this cake design, I think it really could have benefited from thicker fondant. The 3D effect was one of the things that attracted me to the cake design in the first place. Bakers take note! 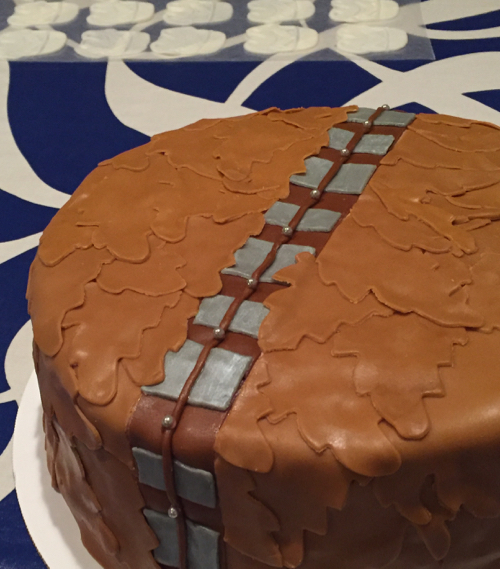 I actually doubled the chocolate cake recipe so that I could use the leftover filling for cupcakes. As a result, I was able to bake the big 10 in cake and make 24 cupcakes. I decorated the cupcakes with Storm Trooper fondant cut outs and candy melted R2D2s. I made the fondant a couple days in advance and got my husband to roll and cut out Storm Troopers the night before. I used white chocolate chips and blue candy melts to make the R2D2s. I filled them with Trader Joe's Os so that they wouldn't be that sweet. These also became part of the favors that went into the kids loot bags. It took me days to make all the R2D2s since I only had one mold. Grrrr. 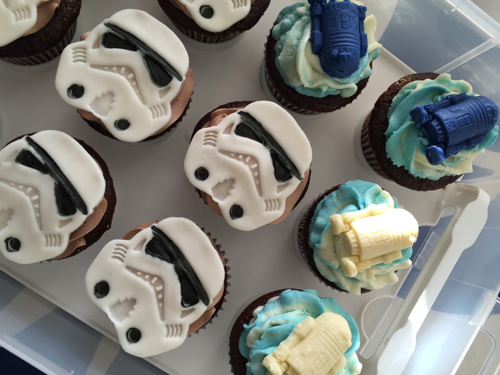 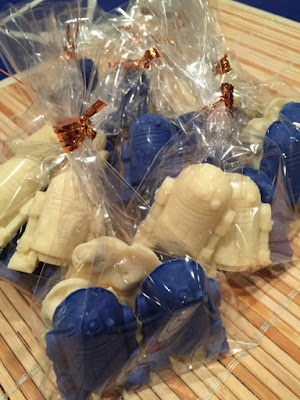 Other things I made for the dessert table were pretzel light sabers, Darth Vader Oreos, and lemon sugar cookies colored and cut out as Yoda. The Oreos were also included in the loot bag. I loved how all these turned out. I got my husband and brother to melt and color the pretzels for me. I was totally running out of time! The Oreos were baked the day before and I filled them with icing the day of the party. We actually had them in Oreo form for many days and they were never soggy or anything. I love how Darth Vader and Yoda cookies are so easy to make and do not require any icing to decorate :) I was going for easy and it was perfect. Between the desserts and food served at the party, I was able to cover many of the different characters in the movie. 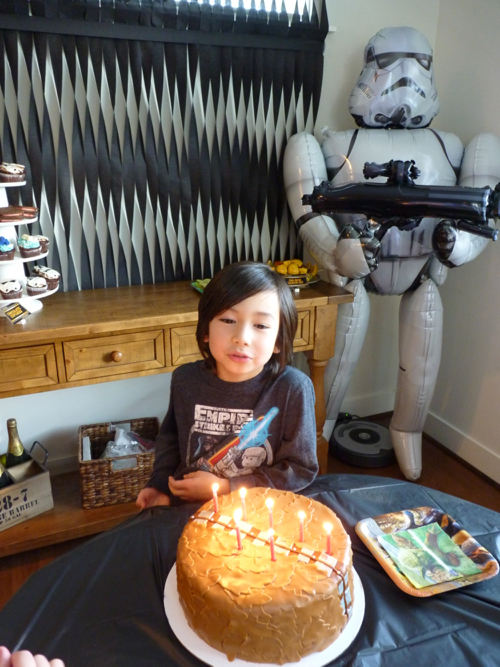 In addition to the cake, I also made Chewbacca loot bags. I bought extra large brown kraft paper bags and aluminum foil tape from Daiso and made the simple bags. I saved these black cardboard pieces from when we bought our Nespresso machine for a future craft and they were perfect for the project! Who knew I would be using them to create Chewbacca loot bags for a Star Wars party one day? I only had to make 9 bags and it didn't take long at all. 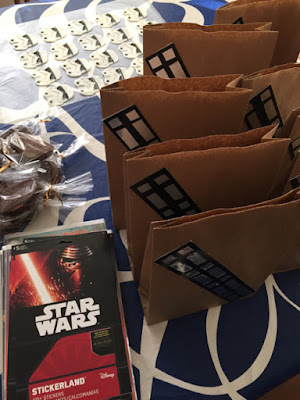 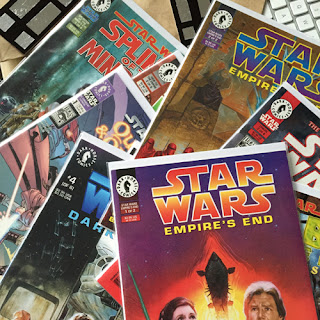 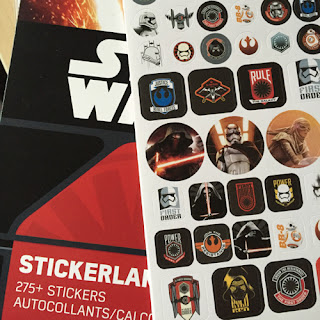 We had great ideas for the loot bags. We purchased brand new old edition Star Wars comics for each of our guests. We also had booklets containing 275 stickers from the new Star Wars movie coming out. We had tattoos from the previous Star Wars movies, the homemade Darth Vader Oreos and R2D2 chocolates. I also threw in Star Wars fruit snacks I bought from the stores. I bought paper masks for the kids to wear and take pictures with during the party and they were welcome to take those home as well. We also planned on giving them the balloon light sabers we made for the games but none of them survived the party. Our group of 6 and 7 year old boys had fun popping them all! Again, who knew?

The games at the party were a bit of a flop. I put my husband in charge of it because I didn't have the time to deal with it. We're both to blame. He's not experienced in dealing with these sorts of things and I should have been involved more. I gave him plenty of ideas and helped him out when I could but during the party he was on his own. Unfortunately, he was not able to command our group of boys and things got out of control. At one point, he was looking for me and kept calling me and said that the boys were out of control and that he needed help. I was upstairs breastfeeding our daughter. Ugh. 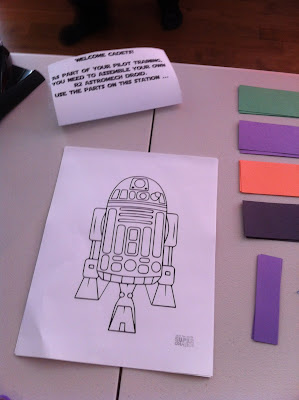 I can't really talk too much about the games and activities that took place since I didn't do them myself. When the kids arrived, my husband had an activity for them to build a R2D2 unit. He spent over 2 hours devising this R2D2 craft for kids and no one was interested in doing it. I felt bad for him. It was too structured and the boys just wanted to whack each other with balloon light sabers. It was a cool idea but it was a last minute idea and I did warn him that we didn't have much time and we needed to just do things we had supplies for. The R2D2 pieces weren't even in the correct colors. He tore open my Halloween construction paper and used that. Had I known, I wouldn't have let him and I would have gave him something else. Plus, I told him we didn't have enough glue sticks for everyone. He thought about using tape and then wanted to drive to Target the morning of the party to buy glue sticks. I am so glad I didn't let him! I mean it was nice he took initiative and worked so hard on the activity. Too bad it didn't work out:(

In fact, we actually already had an activity for the kids to do when they arrived. I had printed out many Star Wars paper crafts for them to cut and clue into 3D characters. This was printed in color the weekend before. Last year, we had coloring pages for those that arrived early, this year I thought we could do this. What they didn't do, they could take home to do later. I thought my husband's R2D2 craft was somehow a game we could play for a prize. There was a misunderstanding there. 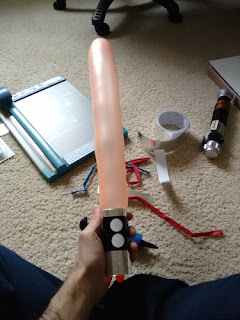 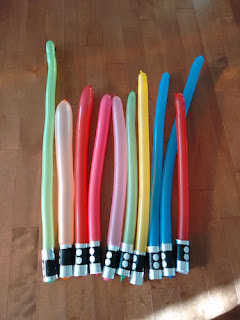 One great thing about the games and activities were the light sabers! When I was crafting my loot bags, my husband was building handles for the balloon light sabers. The aluminum foil tape and black duct tape I got from Daiso were perfect for this. We had leftover round label stickers from when we had our garage sale years ago so we used that as buttons. We took as many shortcuts as we could and I think the balloon light sabers turned out fantastic! Good job hubby :)

We had a light saber game where each kid was blindfolded and they had to use the force to see if they could whack the balloon that was floating in the air. We had a bunch of helium balloons strapped to a larger one and that was moved around. The kids had fun with this game. The prize was a Star Wars pantry pack consisting of Star Wars cereal, Star War fruit snacks, and Star Wars Kraft macaroni and cheese. 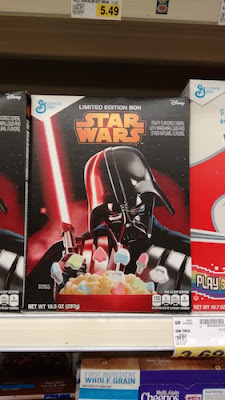 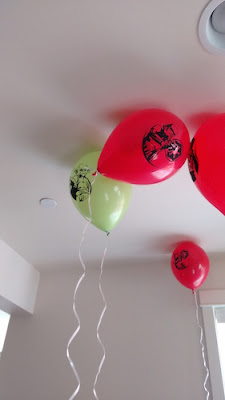 The second game also involved light sabers. My initial idea was to give each person a balloon and light saber and see who could keep their balloon in the air the longest. The game that was played was with one balloon and each kid had to take turns. I guess we ran out of balloons but this game was way too easy.

In the third game, each kid had to shoot at the death star using a nerf gun. My husband used the cardboard we saved from a Lego game last year and cut two holes into them. He decorated it with a bunch of cutouts to resemble the death star. I think. And judging by the colors, it was probably that Halloween construction paper pack again. This was fun when the family tried it but during the party, my husband said only two of the kids tried it out. I think he just has trouble commanding children. 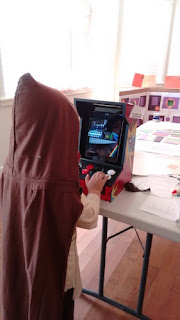 In addition to the games and crafts, we also had the kids watch a Lego Star Wars show while we prepared their lunch. I popped fresh popcorn for them to enjoy while they watched :) My husband also had the kids play video games. Apparently, this happened throughout the party. Again, they had to take turns but they didn't all want to play. He even printed out certificates to give to the kids for three different video games. Ok. There was way too much stuff planned for them to do. Too many choices and no time. I really should have helped him out more. Oops.

So the games were a flop but the food was a hit. The kids all ate but we made so much food! Nothing new there though. Regardless of the disorganized activities, all the kids (as far as I know) loved the party and had a great time! It doesn't take much to please little children. Many lessons learned.
Labels: birthday cake cookies cupcakes loot bag sugar cookies