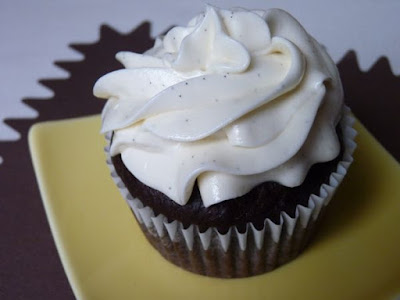 I don't like failure. It took me three attempts to get here and I just about quit the second time. First of all, I have an excellent chocolate cupcake recipe. It's so good and fairly easy to make that I wouldn't know why I would even bother trying other recipes. The problem is it's not vegan. Not vegan in soooo many ways. For my vegan-wannabe husband and all the vegans out there, I thought I would give it one more try.

Okay, I know I'm going to sound like a total food snob after this post. The truth is I have been making a lot of cupcakes in the past year such as chocolate, vanilla, nutella, peanut butter, and red velvet cupcakes. Unless it's totally awesome, I just don't want to waste my time making it. To be fair, my bar was set pretty high before I tried my hands on vegan cupcakes. Since they were vegan, my expectations were pretty low but judging by how my husband reacted, my first two attempts at vegan chocolate cupcakes were failures.

In my first attempt, I browsed the Internet and found one called World's Best Vegan Chocolate Cupcake. When I made it I was hugely impressed by how light and moist it was. It wasn't very sweet though and didn't have a lot of taste. The cupcake left a funny aftertaste in my mouth. I think it was all the baking soda and baking powder in the recipe. A typical replacement for eggs in bakes is baking soda and vinegar so I could see why you would be able to taste this more. My husband's not so kind reaction to the cupcake was "No good. It's tastes like soap!" Ooookay.

For my second attempt, I thought I would try a trusted source. Sweetapolita is all about sweets and when I saw the site posted a vegan chocolate cupcake recipe, I knew I had to try it. If a professional known baker in the community can't get vegan chocolate cupcake right, then it's hopeless, right? Either that or my husband and I are the biggest cupcake snobs. Well, I made them and it was definitely an improvement. Only an improvement. It wasn't great either:( My husband said it still reminded him of soap but a bit less than the last ones. It's official, we're cupcake snobs!

I just didn't get it. From all the comments that I have read, even some non-vegans claimed that their favorite cupcakes were the vegan ones. Was I missing something? The lady behind Sweetopolita even said that she couldn't really tell the difference between the vegan and non-vegan cupcakes. I can honestly tell you that I can totally tell.

I said I was done with all this because there cannot possibly be any good vegan chocolate cupcakes out there. I was pretty convinced. Then I got a bit sad:( But really, I can only try so many different recipes, right? Like I mentioned above, I don't like failure. Today I felt a little ambitious. I browsed online for vegan chocolate cupcake recipes again and thought I would create something new from some of the so-called great ones. In particular, I thought the look of these Dark Chocolate Sea Salt Cupcakes with Vanilla Bean Frosting were adorable. I tried a similar frosting using the new Becel vegan margarine I recently bought. By the way, thank you Becel for making a margarine that is vegan but still the same price as the regular margarine. It was only $2.77 for the one pound tub at Walmart! Score :)

My third attempt at vegan chocolate cupcakes were (drum roll please.....) - a SUCCESS! The frosting was yummy and the cupcakes themselves were good. Together, it made a great cupcake. I am even convinced that I may be able to fool a lot of non-vegans with this one and it would be a hit. My husband's response? "OMG, these are good! They don't taste like soap at all." Lol. So there you have it, the cupcake snobs are now happy :) 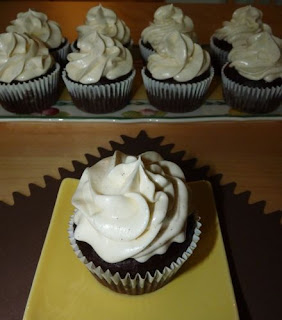 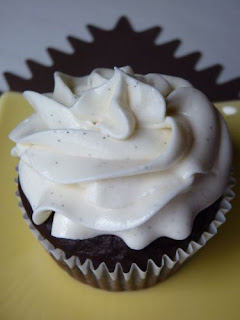 Mix the first 4 ingredients and set aside. In a mixer, mix the rest of the ingredients. On low, slowly add the dry ingredients from the bowl you set aside until well combined. Do not over mix. Bake at 350 F for 20-25 minutes. Cool. 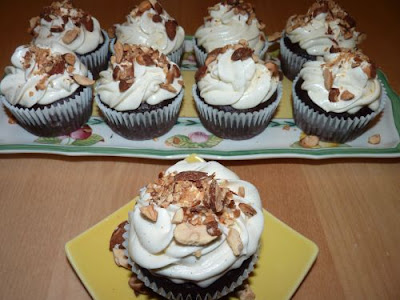 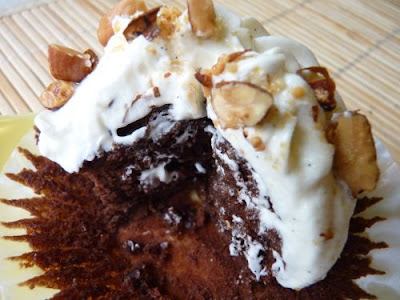