My husband wants to be vegan. I do not. We had to compromise and meet somewhere in the middle. Sort of. The vegans are probably all shaking their heads and laughing. You are either vegan or you're not! My husband is not. I refer to him as a vegan-wannabe. So we're not vegan, nor are we vegetarian BUT we are cutting down on eating meat across the board and we're embracing more vegetarian and vegan dishes. Coming from an all-meat-eating family, that's huge for me!

Anything vegan can be rather intimidating at first but over the past several months, we have learned a lot and vegan food can actually be quite tasty. Like I always tell our 3 year old, you have got to try it before you reject it! :)

I am a big fan of Malaysian mee goreng. It's basically spicy stir fry noodles with meat and vegetables. I've made it before but this time I thought I would try a vegan version. Yes, it's vegan but don't let that scare you because if I were to serve you this, you would probably never guess it was vegan. You actually might be fooled thinking it has meat in it because my husband made some seitan (aka imitation meat) that looks like very convincing meat. Or maybe you don't even care because vegan mee goreng looks delicious, no? I had some for lunch today and I can tell you that I'm looking forward to more for dinner tonight :) 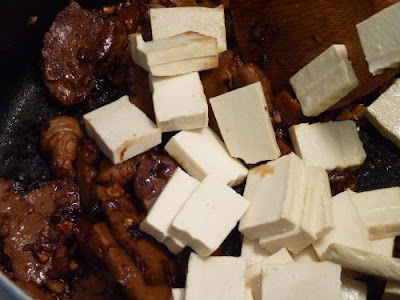 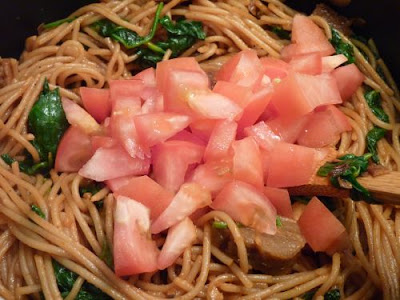 Cook spaghetti noodles until al dente and set aside.

Fry garlic, shallot, and ginger in the oils for 3-5 mins. Add the seitan and fry for 1 min. Add the rest of the seasoning ingredients, then tofu and fry for a few more minutes. Add noodles. Fry for a few minutes at medium heat. Add spinach and fry until collapsed. Add tomatos and turn off heat. Mix well and let sit for a couple of minutes. Serve with green onion garnish.