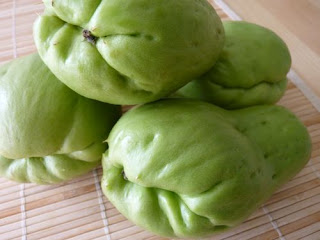 Chayote squash is a fruit that is native to Mexico. You can buy chayote in West Indian, Jamaican, Latin, and most Asian supermarkets, which is where I get mine from. It tastes and looks a lot like zucchini. It holds very well when cooked so it's crunchy rather than soft and mushy like cooked zucchini. It's for this reason that I fed my son chayote when he was a baby learning to feed with his hands. They make good finger foods since they are firm and can be held. Chayote are also low in calories and are a good source of vitamin C and B6, potassium, copper and manganese.

Chayote was one of the many Asian vegetables and fruits I grew up eating at home. I'm fortunate that my parents exposed us to so many different Asian foods, vegetables, and fruits. In some cases, I don't even know what some of the vegetables are called. If I see it in the supermarket though, I would know how to cook and eat it. I shop based on visual recognition rather than by name some times :) I would buy it and then cook it the same way my parents would. Or at least I would try based on what I could remember.

My favorite way of cooking chayote is in a stir-fry. I peel the fruit and then discard the seed. Apparently, you can eat everything but I have only ever eaten the flesh. Be careful handling it because it's super slippery to hold when the skin is off! After you prepare and chop the chayote, you get a sticky film on your hands much like if you were cutting a butternut squash. It can take some serious scrubbing to get it off. Some chayotes are prickly as well so be careful when you are choosing them from the supermarket.

The following is a simple stir-fry recipe I often do to accompany steamed rice and other dishes. If you haven't tried chayote yet, this will give you an example of how you can serve it. If you have tried chayote and love it, I would be interested in hearing how you like to serve it ;) 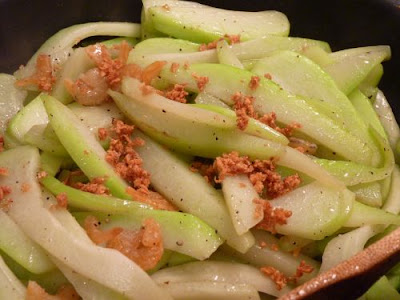 Throw everything but the last 2 ingredients together in a wok and cook for a few minutes until the shrimp is soft. You can cook longer if you like the chayote to be softer. When done, add the fried garlic, drizzle a bit of Maggi sauce and mix. Serve hot with steamed rice.