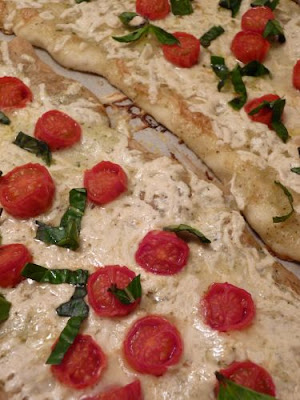 It's so great to see that vegan foods are becoming more and more popular these days :) There are so many sites dedicated to it and more and more people, even non-vegans like myself, are curious and interested to try it out. More and more restaurants and cafes are catering to vegans too. It's actually pretty awesome. I have been blogging for just over a month now and my vegan posts mee goreng and chocolate cupcakes are by far my most popular posts! Each of them has at least twice as many views as my favorite recipe posted so far: Loaded Cannelloni with Kale & Sausage. I suppose more people are searching for vegan dishes and there are a lot fewer of them online compared to non-vegan foods. I'm still a bit surprised at the statistics.

Vegan foods are something I have been interested in exploring, especially in the past few months. I'm beginning to learn that good vegan food actually isn't that hard to come by. I love that it takes a bit more creativity and challenges me as a non-vegan cook to make sometimes daring substitutions. I'm excited to be able to share another successful vegan dish creation! This one was inspired by another recipe that uses a coconut sauce for its pizza. I actually made that recipe but mine turned out too wet even though I used a lot of garlic and coconut cream. We also found it to be overwhelmingly garlic-y. Lol. Then when I tried to fix it with all these other additions, things started to mix really well and I found myself eating a really good vegan pizza. I love when accidents lead to new and great discoveries! :) 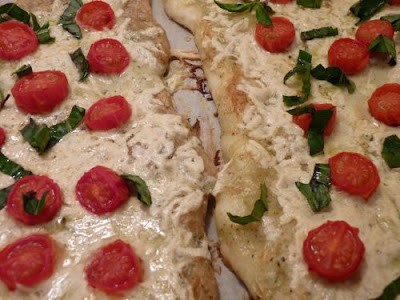 Blend all of the pesto ingredients together until a fine puree and set aside. Empty the can of coconut cream into a bowl and then add just 7-8 tbsp of the pesto. Mix well. You can save the extra pesto for salads, pastas, other pizzas or just freeze it. Spread coconut almond pesto sauce on a pizza dough, sprinkle on some daiya cheese, and top with a few tomatoes. Repeat until all dough is used. Baked at 400F for 10-15 minutes. Remove and cool for a few minutes. Top with a bit of fresh basil. Slice pizza and serve.

*Note about the pizza dough: I like to make my own pizza doughs. I often think that the dough makes the pizza. In France and Italy, pizzas are thin and cooked in wood ovens. There are few ingredients on them and despite being so simple, they are just delicious. I have nothing against the large, filling, loaded North American pizzas but if I had to choose between the two I would choose thin crust pizzas as my favorite. In general, I love all pizzas but since I have full control over what I can make, I always try to mimic the great pizzas I've tasted in France and Italy. You could probably use a normal crust pizza for this recipe but if you are curious about thin crusts, I found a great thin crust pizza dough recipe on 101 cookbooks. It's a bit of work but it's so great I always use it now :)
Labels: coconut pizza tomato vegan